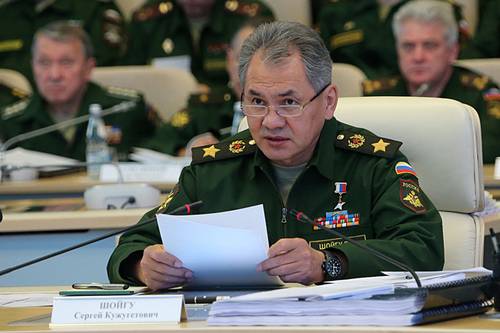 Since President Vladimir Putin appointed Sergei Shoigu as defense minister in November 2012, the greatest organizational innovation in the Russian Armed Forces has been the creation of a National Defense Management Center (NTsUO), aimed at integrating the leadership and direction of defense and security structures in real time, Roger McDermott writes for Jamestown Foundation.

Following some advances toward realizing this goal, including various tests of the center, the NTsUO will be activated on December 1 and go on permanent round-the-clock monitoring of the security situation in Russia, its periphery and globally. Acting in real time as the brains of the Russian military, the center marks a huge advance for the Armed Forces, as well as toward conducting more integrated security operations in the future (TASS, October 26).

To date, little reliable information concerning the new center has emerged, implying that its development and, perhaps, many features of its precise functions are shrouded in secrecy. According to the Russian defense ministry, the NTsUO is designed to centralize command and control of the Armed Forces; ensure daily management of the military; and collect, collate and assess information on the “military-political situation” in the world as well as on strategic directions and the socio-political situation within Russia during peacetime and wartime (mil.ru, accessed on November 3).

The NTsUO is located on the Frunze embankment in Moscow and is designed to withstand a nuclear strike. It appears to unite two main bodies: a command-and-control center for the daily functioning of the troops and several control centers covering specialist issues. The first maintains the combat potential of the Armed Forces as a whole, as well as groups of forces in strategic directions, in peacetime and wartime. The main control center coordinates other command-and-control entities and coordinates with Federal authorities to support the troops’ combat readiness. Moreover, it monitors the implementation of the State Defense Order and provides combat service support including, financial issues, logistics, medical, housing, training or international military cooperation activities (Komsomolskaya Pravda, November 1).

Toward these ends, the new center brings together a number of state power structures, including the Ministry of Defense, General Staff, the Ministry of Internal Affairs, the Ministry of Emergency Situation’s Crisis Center, Rosatom, Roshydromet and others, into a single integrated system. It uses state-of-the-art hardware and software to offer guidance on operational and strategic decision making for the country’s leadership. In so doing, the center greatly enhances information flows and reduces the time involved in such complex decision processes (TASS, October 26).

The novelty lies in the way the center facilitates the joining of top-to-bottom government structures—at Federal, regional and local levels—allowing continuous monitoring and offering advice on priorities during a national crisis or emergency. In fulfilling these tasks, the NTsUO neither substitutes nor duplicates the functions of existing military headquarters or control agencies (Komsomolskaya Pravda, November 1).

Leonid Ivashov, the president of the International Center for Geopolitical Analysis, suggests the General Staff Academy developed the framework of the NTsUO, while the defense ministry operated a situation room where a large screen displays threat assessment information. Ivashov said the new center “will reflect the whole picture; that is, it will show live what is happening in the world, on the borders of Russia, and even within a country, to make it possible to adopt all-around, rather than single-focused, decisions to neutralize emerging threats. The General Staff currently reports a summary by the main intelligence directorate, with individual reports from the Foreign Intelligence Service (SVR), the Ministry of Internal Affairs, the emergencies ministry and so on. These are all of different types and there is no single center where it would all be accumulated and a strategic decision adopted.” Indeed, Ivashov believes the breakthrough in the center, quite apart from technology, relates to uniting analysis, forecasting, and planning: “That is, deep strategic analysis will take place and forecasts of developments will be generated and ideas submitted for the planning of counteractions, while political decisions at the strategic level will be adopted by the president, the defense ministry, and the General Staff. The idea is that such a center should be headed by the chief of General Staff, as this body is not only part of the defense ministry, but is also subject to the supreme commander” (Moskovskiy Komsomolets, October 3).

Lieutenant-General Andrei Kartapolov, the chief of the Main Operations Directorate of the General Staff, confirmed that the driving force in creating the new center is to achieve integration of information flows into a single channel—something unique in Russian defense and security experience. Kartapolov stated in an interview with Rossiyskaya Gazeta that during a military crisis, the defense ministry would remain in charge, while the General Staff would retain its role in overall long-term planning. He said that the NTsUO will supply information to all stakeholders and monitor the implementation of various tasks. Moreover, the center, run by specially trained staff that will undergo three-month courses at the General Staff Academy, will be expanded and augmented by temporary cadres drawn from other ministries and agencies during combat operations. Kartapolov stated that in April 2014, the central command post of the General Staff integrated with the NTsUO (Rossiyskaya Gazeta, October 27).

In the formation of the new center, with its sophisticated high-technology hardware and software, Kartapolov is proud of its greatest achievement: all components are domestically produced. The domestically manufactured hardware-software complex will also offer simulations of crises situations at home and abroad (TASS, October 26).

The NTsUO will greatly facilitate integrated strategic and operational planning in a single information space, which represents a significant boost to command and control, and an important step toward developing a military force for the 21st century. The center brings together specially trained specialists drawn from across the security sector, equipped with modern automated communications systems. As an article in Komsomolskaya Pravda notes: “They monitor all activities, both within the Armed Forces and within the military organization of the Russian Federation, on the implementation of the Plan of Defense of the state” (Komsomolskaya Pravda, November 1).

As a result, the formal opening and 24/7 functioning of the NTsUO will mark a significant step toward Russia boosting its overall defense and security capabilities, both offensive and defensive. It will require staff development and constant efforts to maximize performance. However, in the long term, this center and the lurch toward a network-centric focus may represent more of a challenge than Russia’s dabbling with unconventional warfare in neighboring states.