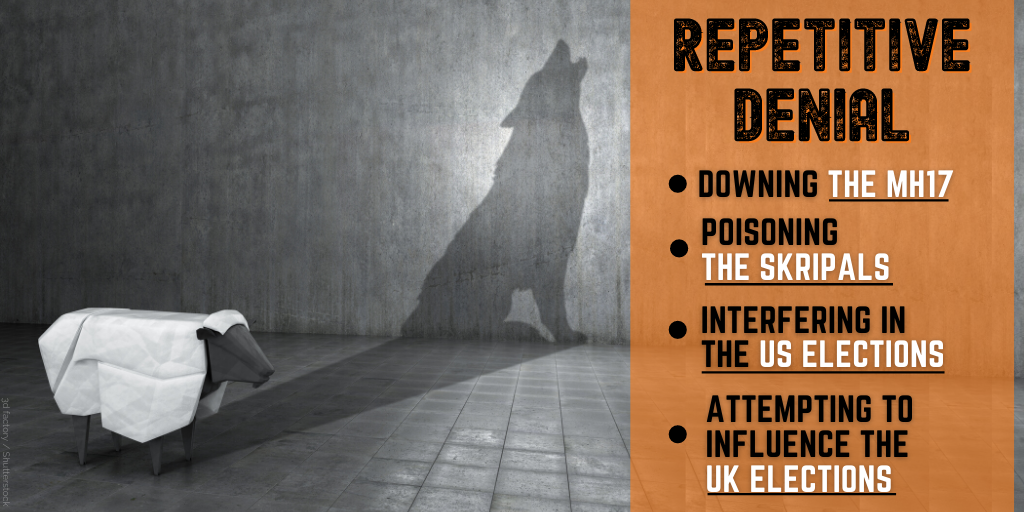 Despite evidence pointing to the contrary, pro-Kremlin media continues to claim Russia had nothing to do with downing flight MH17, poisoning the Skripals, or interfering in the US elections.

In addition to these old classics, this week brought a new disinformation pearl. You know how people sometimes express themselves and only later realise that their words could have been interpreted in different ways. However, when it comes to Russian foreign policy, unlikely statements seem to be intentional  rather than accidental. One of the most blatant examples is the claim that Russia’s foreign policy is “based on respect for international law and does not accept attempts to dominate, dictate the will of others over independent countries, nor interfere in the affairs of their sovereignty”. This sentence leaves audiences wondering whether annexing Crimea is not seen as interfering in the affairs of an independent country or facts have been twisted beyond recognition.

It’s precisely this “not interfering” in Ukraine or Georgia that prompted a group of US democratic senators to write a resolution against Russia’s participation in G7. Instead of addressing the reasons for this initiative, pro-Kremlin media used the Russophobia card. The same approach was adopted when the West noted that before the vote on amendments to Russia’s constitution – which will allow President Vladimir Putin to stay in power until 2036 — campaigning both for and against the proposed changes was banned, thereby denying voters access to balanced information.

On the topic of democratic processes, or lack thereof, pro-Kremlin media also levelled a number of groundless accusations against NGOs: hegemonic mainstream media, some political institutes and NGOs used every mean at hand to express their rejection of Russia’s democratic process and funding NGOs explains how a man who calls himself a “philanthropist” [George Soros] managed to destabilise many European countries.

With the global pandemic showing no sign of abating and pro-Kremlin media claiming Russia has already found a vaccine, it is a good time to scrutinise how pro-Kremlin media have been covering the pandemic. As displayed by the timeline below, the main narratives are straightforward: Russia is doing great, while the West is on a losing streak.