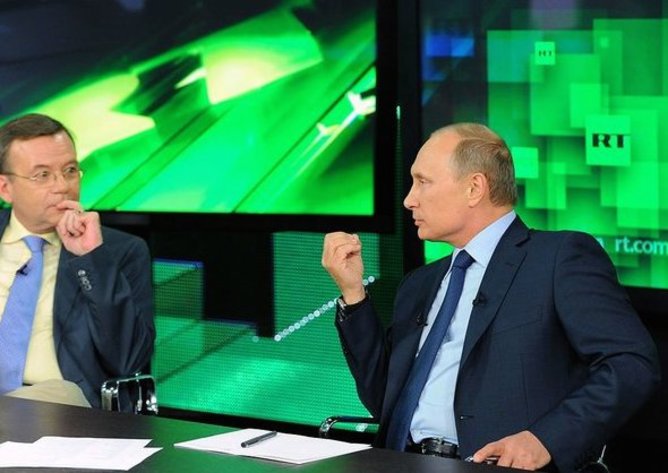 “Life would be boring without rumors.”

So said Russian President Vladimir Putin, upon re-emerging from a mysterious ten-day disappearance, during which the internet exploded with speculation he was dead.

The Kremlin added fuel to the fire after posting photos of Putin on its website it claimed were current – but which turned out to have been images from a meeting that had taken place a week earlier.

It’s not the first time that Putin and the Kremlin have played fast and loose with the facts. At the annual G-20 summit in Australia last fall, when the Prime Minister of Canada told Putin to get his country’s troops out of Ukraine, the Russian leader apparently responded, “Unfortunately, this cannot be done, as we are not there.” (And remember the “little green men” in Crimea whom Putin suggested were not Russian soldiers, but unknown citizens masquerading in used Russian uniforms?)

Yet according to polls, 85% of Russians voters trust Putin, an all-time high. And even though it’s common knowledge that the state has seized control of the country’s three main television stations, somewhere between 80% and 90% of citizens continue to rely on those stations for their news. (Russians watch an average of 3 ½ hours of state TV a day.)

Why are Russians so willing to swallow misinformation? Have the country’s citizens – after decades of learning to read between the lines during the Soviet era – suddenly become gullible?

Not exactly. Instead, the Kremlin has become increasingly sophisticated in its media strategy. Even as it continues to enforce conformity of coverage at home, it criticizes conformity abroad. Moreover, it borrows from the playbook of its former Cold War enemy, the US, to shape public opinion – in part by concocting a powerful story of Western spin.

Newspeaking from both sides of the mouth

To the international audience, the Kremlin advertises pro-Russian coverage as an “alternative point of view” that any truly “free” press should acknowledge.

Such rhetoric borrows heavily from that of Fox News. Upon launching in 1996, the nascent network introduced itself to US viewers as a “Fair and Balanced” alternative to what it claimed was the country’s overwhelming “liberal media bias.”

Likewise, in selling their product as more open-minded alternative to the supposed “Anglo-Saxon mass-media monopoly,” RT has enjoyed astonishing success.

These media agencies are slick – and not stupid.

In particular, their criticism of the American political establishment is often hard-hitting, conveying concerns about US-led hegemony shared by other countries across the world.

Such outlets typically argue that the US media frames the Ukraine conflict in outdated Cold War clichés, and that it too readily embraces Ukrainian leaders who are also manipulating information to elicit Western sympathy (not to mention vast amounts of financial aid). It also argues that Western media hypocritically avoids probing into the United States’ own checkered record of overseas crimes.

“We’ve switched roles,” crowed Sputnik chief Dmitry Kiselev last year. “Russia is for freedom of expression and the West is not.”

Some accuse the Kremlin of “weaponizing information,” combining the Newspeak of George Orwell with “the savvy of Don Draper.” According to journalists Peter Pomerantsev and Michael Weiss, Russian “political technologists” work behind the scenes to insert deliberately false material into international public debate in the name of balanced and objective coverage.

At the same time, they strive to discredit the very principle of objectivity, encouraging viewers to believe that – especially during international conflicts – all journalism is skewed by politics and preconceptions.

It’s a deeply cynical strategy. But it works. Most Russians appear to embrace the argument that “everybody lies” – including the West.

“Isn’t the labeling that CNN and BBC use also propaganda?” opined leading Russian state television anchor Andrei Kondrashov. “We [in Russia] have simply adopted the same methods that they use today.”

Kondrashov and others point out that US corporations and Hollywood celebrities (not to mention US presidential candidates) all hire expensive PR firms to place stories, tactically leak information and cultivate point people who can be relied upon for appropriate spin. And, indeed, a recent report from the Bureau of Labor Statistics predicts a decrease of 7,200 journalism jobs by 2022, but an increase of 27,400 positions in PR.

Then there’s the mass hiring of internet trolls to articulate a pro-Putin message on Western media sites. Many US journalists have called it a “Kremlin attack” to “claim control over the internet.” Moderators at the British Guardian – where articles can be flooded with as many as 40,000 comments a day – have termed it an “orchestrated campaign.” Meanwhile, the English-language Moscow Times has been forced to shut down its online discussion forum, citing floods of spam.

Russia’s only remaining independent investigative newspaper interviewed individuals who admitted to being paid to produce a quota of 100 posts a day. But in explaining their responsibilities, the interviewees echoed the language of US election campaign managers who organize “rapid response” teams of volunteers to write letters to the editor, post on social media and comment on articles – all to shape and influence debate.

Director Nikita Mikhalkov, for instance, is a long-time critic of Soviet-style dictatorship. (He won an Oscar for his anti-Stalin 1995 film Burnt By the Sun.) Yet he’s also an outspoken Russian nationalist – and a close friend of Putin. At the premier of his most recent film, Mikhalkov declared, “Anyone who says Crimea is not Russian is the enemy.”

His next project will be a television series about the death of legendary 19th century Russian writer-diplomat Aleksandr Griboedov. The director claims that he will correct the historical record, to “prove” that Griboedov was killed in Tehran by Muslims acting under the direction of British spies during a time of Anglo-Russian competition for influence in Central Asia.

Though set in the distant past, the project reinforces contemporary media messages: just as the British connived to undermine Russian interests in 19th-century Persia, so, too, are the Americans meddling in Ukraine.

But US popular culture is also filled with anti-Russian allusions. For example, the third season of House of Cards depicts US President Frank Underwood locking horns with his Russian counterpart, Viktor Petrov – a figure who shares not only the same initials as his real-life model, but also a KGB background, an extended term in office, a failed marriage and a penchant for political cynicism.

Meanwhile NBC’s Allegiance centers on Russian spies in America who are plotting a terrorist operation to retaliate against US sanctions. It’s an attack that will, exults one character, “allow us to operate as we wish, in Ukraine, in Europe, in the world.”

One early scene depicts the plotters slowly feeding one of their colleagues suspected of betrayal into a furnace, after reminding him that the name of their organization may have changed but “the rules remain the same.”

Viewers are thereby encouraged to link contemporary Russian intelligence operatives to the Soviet-era KGB, with a twist of modern-day ISIS thrown in.

Still, Russia’s in a league of its own

But differences in degrees of media freedom matter, and borrowed strategies do not mean equivalent ones. What’s important is to find a way to criticize the shortcomings of US media practice and policy, without fully embracing Russian spin.

While both countries may be promoting a “new Cold War” along cultural lines, what distinguishes Russia is the level of manipulation involved in, as Putin’s critics phrase it, “activating hatred.”

It’s a process fueled by an increasingly organized, largely invisible set of censorship personnel and practices. Government pressure on the handful of independent outlets that remain continues to grow. (The haunting question of who’s behind the death of opposition leader Boris Nemtsov looms large.)

Meanwhile, the most popular programs remain the ones where fact and fiction unapologetically blur.

A self-described “documentary film” that aired in mid-March to commemorate the first anniversary of Russia’s annexation of the Crimea opens with a shot of a Russian Orthodox church, a military helicopter and an interview with Putin.

“I invited the head of Special Operations to the Kremlin,” Putin somberly recounts, “and told him, ‘let’s speak directly, that we must save the life of the President of Ukraine.’”

Combining professional History Channel-style packaging with staged re-enactments of events (that may not have even taken place), the film, titled Crimea: The Way Home has already garnered more than five million views online.

It’s a testament to the immense – and rapid – growth of Russia’s mighty media megaphone.