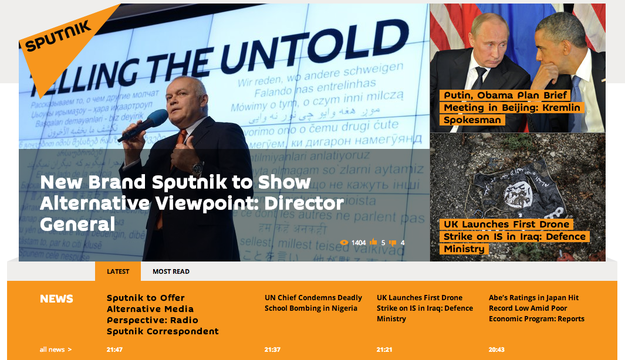 The Kremlin on Monday launched a brand new global propaganda effort called Sputnik as it seeks to build on the success of its English-language propaganda channel Russia Today. Sputnik will comprise a website and radio, and will broadcast in 30 languages from “multimedia hubs” based everywhere from London to Rio de Janeiro to New Delhi and Washington, the Moscow Times reported.

The new project was announced by Kiselyov, who is Russia’s propagandist-in-chief and its most colorful on air personality.

“We are against the aggressive propaganda that everybody is fed with and that imposes a unipolar model of the world,” Kiselyov said during the opening ceremony, the Moscow Times reported. “We will say what others are silent about. The world is tired of one country thinking of itself as exceptional.”

When Kiselyov was appointed head of Rossiya Segodnya, here’s what he said about how the conglomerate’s outlets would cover their country and the world: “[O]ur country — Russia — needs our love.”

“[I]f we are to speak about traditional politics, then of course we would like it to be associated with love for Russia,” he told employees. “That does not mean that we cannot talk about problems. One hundred percent. I have not said that, and I am emphasizing this. But a hostile attitude…can be left to private media, if someone is prepared for everything.”

Rossiya Segodnya, like Russia Today television, is 100% financed by the Kremlin. (To keep things confusing: Rossiya segodnya is how you say “Russia today” in Russian.)

Here’s one of their first stories. Did you know Miami is looking to secede from Florida? Just like parts of Ukraine! It’s totally normal.

A new report over at the Interpreter website details just how Russian propaganda works and how it has evolved — from presenting Russia as an idealized country to “making the West, and especially the U.S., look bad.”

Looks like that will be the aim of Sputnik, a combination of exaggeration and disinformation designed to make Russia’s digressions look to be the global norm.

(Sputnik, by the way, is the Russian word for “satellite” and was the name of the first satellite launched into space, in 1957. The Soviet Union’s ability to launch a satellite before the U.S. set off a major freak-out in Washington.)

Basically, Sputnik looks to be another version of Russia Today — another website, an added radio effort. The launch comes as Russia Today is under investigation in the UK, where its broadcast regulator is investigating the channel for failing to adhere to impartiality, particularly in its coverage of the conflict in Ukraine.

The launch of Sputnik also comes amidst a major push against press freedom — what remains of it — in Russia. Russia’s media environment has undergone a major reshuffling in the past couple of years, since Putin returned to the presidency following the first real protests against him. As he has grown ever more paranoid, so the space to criticize him has continued to shrink.

On Monday, the editor-in-chief of Kommersant, a newspaper that was once independent but has come to toe the Kremlin line, stepped down amid rumors that he was pressured to go over an article about state-owned oil giant Rosneft. Russkiy Reporter, one of the few remaining independent magazines, received a word of warning. And CNN was forced off Russian television. And that all comes amid a major scandal at Ekho Moskvy, a radio channel that has led critical coverage of the Kremlin for years (it forms a community, like NPR, if all of NPR’s listeners were dissidents).

A host of other media are under threat — from the Moscow Times to Vedomosti — following a new law that reduced the shares foreign citizens or companies could hold in Russian media (from 50% to 20%).