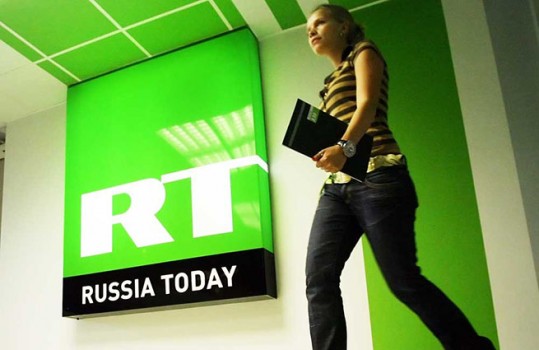 The crisis in Ukraine has unleashed what some see as a new bout of information warfare between Russia and the West.

For nearly a decade, the Kremlin has been busily striving to win hearts and minds around the world mainly through its flagship international broadcaster RT (formerly known as Russia Today). These efforts have been increased since the onset of the Ukraine crisis in 2014.

Now Western media and governmental organisations are stepping up their efforts to reach out to Russian speakers.

Just last week, the BBC said it was looking at plans for a new Russian satellite TV and video service.


Meanwhile the EU’s European External Action Service (EEAS) is preparing to launch a special anti-propaganda task-force aimed at Russian speakers in the EU and other parts of Eastern Europe.

In January the European Parliament had urged the EU to develop “a communication strategy to counter the Russian propaganda campaign”, in a strongly-worded resolution.

The German and US-funded international broadcasters Deutsche Welle and Radio Liberty, as well as Euronews – part-funded by the EU – have also been boosting their Russian operations.

But the evidence suggests that these attempts to influence opinion in alien media-spheres are unlikely to make a great impact.

During the Cold War there was intense media rivalry between Russia and the West to influence global opinion.

The other arm of the Kremlin’s international media operation, the news agency Rossiya Segodnya (Russia Today), also got a big rouble boost. It now gets the equivalent of $89m.

These increases were needed to partially offset the recent slump in the rouble’s value.

But they also underline the increasing importance the Kremlin attaches to its international media operations. They now account for 34% of total central government media spending, compared to 25% a year ago.


When President Vladimir Putin visited RT’s offices in 2013, he praised its success in helping to break the “Anglo-Saxon monopoly” on the international media market.

No reliable figures are available for RT’s audience worldwide. But evidence from the UK tends to belie Mr Putin’s words.

Data from the Broadcast Audience Research Board (BARB) shows that in August RT’s average weekly reach was around 450,000 or 0.8% of the total audience. That is some 100,000 less than in June 2012, when BARB started publishing data for RT.

Moreover, RT is losing out to one of its main international rivals, Al-Jazeera English (AJE). In June 2012, it was marginally outperforming AJE. Now it gets less than half the audience of the Qatar-owned channel.

But RT will draw some comfort from the election of Jeremy Corbyn as leader of the Labour Party. Mr Corbyn has in the past expressed approval of RT and has made numerous appearances on the channel.


The picture on social media is somewhat different. On Twitter and Facebook, RT is comfortably outgunned by the international giants, BBC News and CNN. But on YouTube it is the clear market leader, with more than 1.5m subscribers and nearly 1.5bn views on its main channel.

But what do YouTube viewers mostly watch on RT?

More than any of the other big international broadcasters, RT depends for its large number of views on disaster/novelty videos in almost all cases, with little or no input from its journalists. All of the top 20 on its main YouTube channel (accounting for some 300m views) can be said to fall into this category.

When it comes to videos about major political events its viewership is much smaller. Only a handful of its top 100 videos can be described as “political” and only one of them refers to the crisis in Ukraine.

But RT and Rossiya Segodnya are by no means the limit of the Kremlin’s foreign media operations. It also has the international versions of its main domestic channels, with their powerful mixture of lavish entertainment and emotive news coverage.

These are widely believed to have influenced public opinion ahead of Russia’s intervention in Ukraine.

Now there are Western fears that those state-run channels could pave the way for pro-Russian interventions elsewhere, especially the three Baltic states, where they have combined average audience shares of up to 25%.

Large ethnic Russian minorities remained in the Baltic states after independence in 1991, when the Soviet Union broke up.

There are also concerns about pro-Kremlin comments spreading on social media – many allegedly planted by “trolls” paid by the Russian state.


Latvia and Lithuania have responded to the challenge posed by Russian TV by tightening media regulations and even temporarily banning some channels.

Estonia, on the other hand, is preparing to launch a new channel aimed at its 350,000 Russian speakers, forming nearly 30% of the population.

But with just a fraction of its Russian competitors’ funding it is not expected to make a great impact.

The head of the Lithuanian public broadcaster has likened ventures of this kind to using “pitchforks to oppose tanks”.

The same might be said of the efforts of Western broadcasters to influence opinion in Russia.

A recent survey by state-funded pollster VTsIOM and Western academics found that 45% of Russians backed censorship against foreign media. The same survey found that just 2% named foreign media as one of their main sources of information.