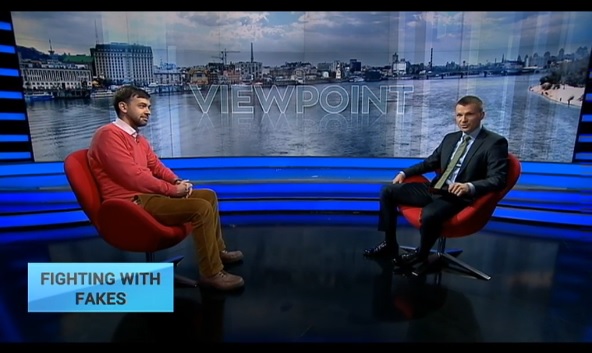 Ukraine Todays Viewpoint is joined by the director of Mohyla School of journalism, one of StopFake.org website founders, Professor Yevhen Fedchenko, to discuss the most recent information attacks on Ukraine.

Volodymyr Solohub: Just recently Ukraine found itself under yet another information attack. A video was spread online where members of Ukrainian military were threatening the Dutch citizens with violence in case they don’t vote in favor of Ukraine during the upcoming referendum. What is your take on this?

Yevhen Fedchenko: Actually, StopFake was one on those many media organizations which paid a great attention to this information and finally it appeared to be fake. We were researching to this story and we have found a lot of evidences why this story is fake. This is just one of examples of false flag operation, part of the active measures against Ukraine and we definitely can track it back to the country which must be very interested in bringing this story up and trying to spoil the image of Ukraine again because of the upcoming referendum. So, this is just one of those many story which would connect now Ukraine to the Netherlands and I think that we would see many others to come.

V.S.: And this country we talking about is, obviously, Russia? Correct?

Y.F.: Yes, because we are always looking to who might be interested in putting up the story like this and producing this fake at this very time, at this very kind of market for fake news. So, if we think about who is interested, definitely we come back to the answer – Russia is interested.

V.S.: You are the expert on fakes and from this standpoint point of creating fake news how well this video was executed?

Y.F.: It was a very purely executed video, but this is not important to those who were expected to believe it, in the first place. They just want to make a lot of stories like this. So, it is not a question of quality. They really want to find the big target audience. They just want to confuse audience and bring pieces like that. They would be just continue producing all these things to create a mass, to make sure that people in the Netherlands will be absolutely confused and frustrated about Ukraine and what’s hapenning here.

V.S.: Let’s plays devils, if you were creating this fake video, what would you have done differently?

Y.F.: Of course, I’d like to do it more authentic from the point of view of production, I mean likeliness of uniform and weapons which Azov (batallion) is using. It should be a better script. Of course, it should be more logic in terms of how this referendum questions and association agreement can be connected to terrorist attacks… For me this looks very much like traditional Kremlin tactics. If you are into agreement with us, we are going to explode you. Definitely, that’s not a type of Ukrainian narrative and battalions like Azov were never involved in terrorist acts. So, why they would start that with the country which is very far away from Ukraine. So it is very illogical from the point of view of continuity of all the previous events.