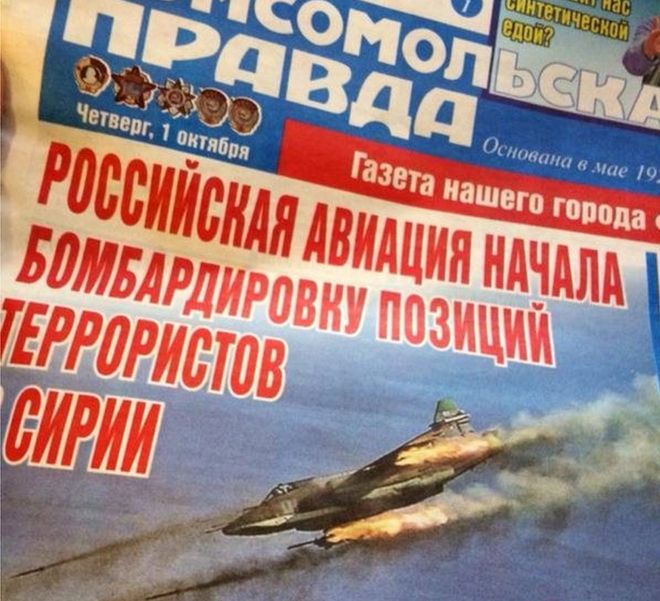 Coverage of Russian air strikes in Syria has been leading news bulletins on Russian state television. Reports spoke of jets targeting the Islamist al-Nusra Front as well as so-called Islamic State (IS).

But mostly Russian media simply calls the targets “IS” or “terrorists”.

The wide Russian coverage contrasts markedly with the secrecy that Russia clamped on military operations in Soviet times, particularly during the costly war in Afghanistan.

In a major new departure, Russian TV showed video of the air strikes, filmed by drones. Similar US and Israeli footage from the Middle East has been shown widely before, but this is quite new for Russians.

Channel One TV, a key source of news for most Russians, stressed that the Russian operation was based on Syrian intelligence and had been requested by Syria’s President Bashar al-Assad.

Reports on the air strikes echoed a warning from President Vladimir Putin that Russian Islamists in IS posed a threat to Russia.

Channel One showed Russian jets being maintained at night as crews prepared for sorties from a base near the government-held Mediterranean port of Latakia.

An air force spokesman there, Igor Klimov, said eight IS targets had been destroyed – command and communications posts, transport, fuel dumps and weapons stores. They included “terrorist” operational headquarters “in the mountains”.

Bulletins on the state-run Vesti news channel said Su-24 jets bombed al-Nusra Front positions just north of Homs, and a few hours later Syrian government troops attacked the militants. “More than 5,000 militants are dug in there,” it said. Al-Nusra is allied to al-Qaeda.

That means the Syrian air force often gets there too late to support the ground troops, according to Vesti. “The Russian planes will be able to operate over Syria in a much more timely and accurate manner.”

Russian news reports also say the planes can carry out raids around the clock, whereas Syrian aircraft are limited to daytime raids.

The Russian defence ministry said the Russian jets carried out 20 raids on Wednesday, 12 of them against IS targets. It insisted that no civilian infrastructure was targeted.

Four of the air raids against IS were conducted at night.

In all, Russia has deployed more than 50 planes and helicopters to Syria, the ministry says. Russian Su-24M jets completely destroyed an IS command post in Latamineh, as well as an IS headquarters and ammunition dump near Talbiseh, Gen Igor Konashenkov of the defence ministry said.

He said the air strikes also destroyed a “terrorist” headquarters and ammunition dump near the town of Idlib, a command post near Hama and an explosives factory north of Homs.

Meduza, a liberal Russian-language news source based in Latvia, quoted the figure of 36 civilians killed in the Russian bombing, widely reported by Western media. The figure was given by Khaled Khoja of the anti-Assad Syrian opposition.

President Putin rejected reports of civilian casualties as “information warfare” and the news outlets that most Russians rely on did not report Mr Khoja’s allegation. Nor did they report Western claims that moderate Sunni rebels had also been bombed. The Russian daily Kommersant appears to give the most details of the Russian operation, including precise figures for the aircraft involved and their combat radius in Syria.

Kommersant said an Islamist push towards the Latakia region in recent months had alarmed the Syrian government.

Russian media stress that only professional soldiers have been sent to Syria, not conscripts. However, the force strength and units have not been revealed.

According to the daily Vedomosti, there will be no shortage of soldiers willing to go there, to earn bonus pay. Officers were paid an extra $62 (£41) a day there, and lower ranks an extra $43 (£28), it reported, quoting Valentina Melnikova, head of the Soldiers’ Mothers group.

Since the rouble’s slump in value, that kind of bonus – paid in roubles – means a lot more purchasing power in Russia.

An operation to oust IS from Palmyra would have great propaganda value, Kommersant suggests, but would be high-risk for Russia. Photos revealing IS destruction of Palmyra’s ancient temples triggered international outrage.

Meanwhile, in the popular tabloid Moskovsky Komsomolets, military analyst Ruslan Pukhov warned that an attack on the Russian air base could not be ruled out – even by “some unidentified planes”.

Faced with that risk, he warned that limiting the operation to the air force “cannot save us from a ground operation – and we need to be ready for that”.