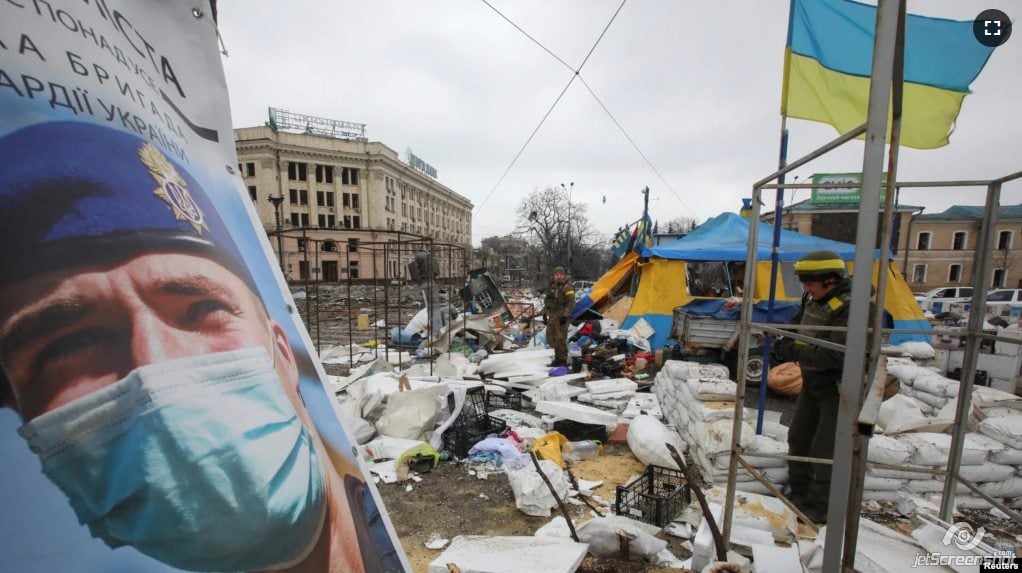 On March 1, Russia ramped up its assault on the Ukrainian city of Kharkiv, hammering it with airstrikes as Russian military operations across the country intensified.

Video of the attack in Freedom Square shows a huge fireball erupt in front of the regional administration building.

But the NTV television channel, which is owned by Gazprom-Media, a subsidiary of Gazpom, Russia’s majority-state owned natural gas monopoly, claimed Ukrainian forces launched the strike against the regional administration building.

In a report uploaded to YouTube on March 1, NTV falsely reported:

“(Ukrainian President Volodymyr) Zelenskyy blamed the strike on Russia, but experts have found it couldn’t have been a Russian attack.

“In the opinion of specialists, a VSU (Armed Forces of Ukraine) missile hit the Kharkiv administration building.

NTV claimed the “false flag” attack was just one of more than 1.5 million fake stories put out since Russia launched its “special operation” in Ukraine, and that Ukrainian intelligence “is behind many of them.”

The channel also announced that the Russian government had launched the Explain.RF portal “for those who want to receive verified information.”

The NTV report provided no evidence that Ukraine attacked its own regional administration building as part of a “false flag” operation.

Ukraine’s Foreign Ministry released footage of the missile attack on the regional administration building in Kharkiv.

Evidence strongly suggests the strike was a Russian missile.

The France 24 Observers, a website that analyzes amateur videos, said it could not determine the exact weapon used to attack the regional administration building in Kharkiv but concluded the projectile was at least six meters long.

“It could therefore have been a Russian long-range rocket, or a Kalibr-type cruise missile, both of which are in Russia’s arsenal,” The France 24 Observers reported.

But researchers at the Netherlands-based investigative journalism group Bellingcat said they had possibly identified the projectile after enhancing CCTV surveillance footage of the missile hit the building.

Bellingcat noted that the Ukrainian armed forces do not have this type of missile.

European Union Ambassador to Ukraine Matti Maasikas tweeted that the “Slovenian Consulate in Kharkiv was destroyed as ‘collateral diplomatic damage’” in the missile strike.

The Embassy of the Republic of Slovenia directly blamed Russia.

“The Consulate of the Republic of Slovenia in Kharkiv was destroyed by a Russian rocket attack today. The Honorary Consul is safe. This horrific act will not remain without consequences,” the embassy tweeted.

The strike on the regional administration building Kharkiv occurred within the context of a wider Russian siege of the city.

On March 2, Russian Airborne Forces reportedly dropped into the city. Ukraine’s military accused those forces of attacking a hospital.

Videos of reported attacks on medical facilities in Kharkiv were also posted on March 1.

Videos have also surfaced showing damage from the Russian military’s shelling of residential buildings and schools in Kharkiv.

Synegubov said Russia had used rocket launchers and cruise missiles in its assault on the city.

Military experts have posted videos suggesting Russian forces in Kharkiv are using cluster munitions, which have been banned by 110 countries (although not by Russia, the United States or Ukraine).

A video purportedly showed a man standing below the building the moment it was struck.

Defense analysts say either a cruise missile or a bomb from an SU-34 fighter jet was used in that attack.

On February 28, the Conflict Intelligence Team (CIT), an open-source investigative outlet based between Ukraine and Russia, provided evidence that Russian SU-34s had flown towards Kharkiv, after which “large smoke plumes” could be seen in video footage rising from the North Saltivka residential area.

According to CIT, the Russian Airspace Force is bombing Kharkiv and its environs, “and evidence suggests they are using unguided bombs, just like in Chechnya and Syria.”

All of the attacks have come despite assurances from Russia’s Defense Ministry that its forces would not target civilian infrastructure.

Ukraine claims more than 2,000 civilians have been killed since Russia invaded the country on February 24.