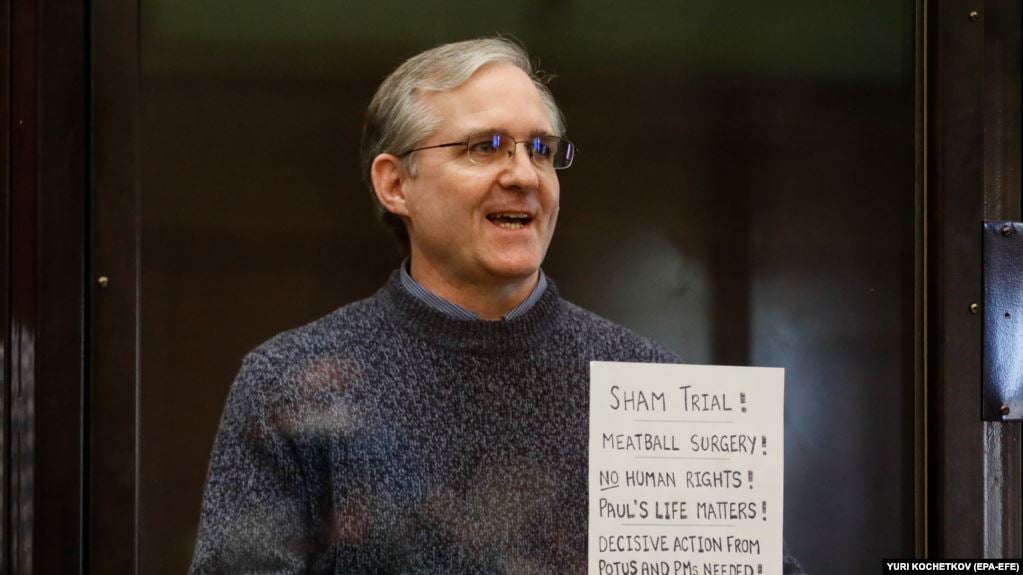 On June 15, a Moscow court sentenced Paul Whelan to 16 years in a penal colony for espionage. Whelan visited Moscow in December 2018 to attend a friend’s wedding. Russian agents arrested him after he allegedly accepted a thumb drive with classified information. Whelan has citizenship in the U.S., Canada, Ireland and the U.K.

Whelan has strenuously disputed his arrest and prosecution as a setup. In a statement released after his sentencing, the U.S. State Department condemned the trial and treatment of Whelan as “appalling.”

“The United States is outraged by the decision of a Russian court today to convict U.S. citizen Paul Whelan after a secret trial, with secret evidence, and without appropriate allowances for defense witnesses,” the statement read.

“As is known, P. (Paul) Whelan himself delayed the familiarization with the court materials for six months, reading them without much haste from September last year to March this year,” the office said in a statement.

The ministry’s statement is false.

In fact, Whelan and his lawyer had limited access to evidence against him; moreover, it was provided in Russian and not English.

According to Whelan’s twin brother David, the evidence had to be translated and read to Paul via one of his lawyers, Olga Karlova.

“It’s six months, but not because Paul took his time,” David told Polygraph.info.

“It’s because the Russian authorities didn’t follow the law and provide him with materials (in English), [and] allowed him only periodic visits with his lawyers, in a few hour bursts, to review and translate the evidence. “

Karlova confirmed the process in an interview with Polygraph.info, saying Whelan could only go over evidence while she was present at Moscow’s Lefortovo Prison to translate.

“I was busy also in my other cases, so we usually met twice a week maximum,” Karlova said. “That was the reason for studying the materials for 6 months. It was very hard to visit Paul at Lefortovo. Too many prisoners and only 8 rooms, so our turn was only once a fortnight.”

Karlova also confirmed that evidence in the case was secret, and that it was all in Russian except for documents that were required to be translated. Most of the translation was done orally.

Blaming Whelan for delays was not the only false claim the ministry made it its statement.

It also falsely asserted that Whelan was given the opportunity to speak with family members by phone.

In September 2019, Polygraph.info fact-checked a Russian Foreign Ministry statement denying that Whelan was “isolated” in prison. We found that authorities at Lefortovo Prison had denied Whelan his right to phone calls with his family.

The ministry’s latest statement about Whelan also included a misleading claim about his medical treatment while in detention: “During his stay in the prison (Lefortovo), P. Whelan was provided with all the necessary qualified medical care. On May 28, in connection with the deterioration of health due to an exacerbation of an existing disease, he underwent a simple surgical operation, which he had previously refused.”

The ministry was referring to hernia surgery that Whelan had scheduled in January 2019 after his planned return from Russia. After his arrest, his lawyers asked that Whelan get a medical exam, but prison authorities claimed they never received the request.

Whelan did get an exam at a Moscow hospital in September 2019 and was told that his hernia was not in an acute stage. Whelan decided to refuse surgery because he didn’t “trust Russian doctors,” one of his lawyers told Polygraph.info.

Whelan, 50, worked as a security consultant for the BorgWarner auto parts supplier and had visited Russia several times since 2006. There was speculation that his arrest was in retaliation for the arrest and guilty plea in the United States of Maria Butina on charges of conspiring to act as an unregistered foreign agent.

Butina was released and sent home to Russia in October 2019 after serving only five months of an 18-month sentence.

There is now speculation that Russian authorities may be looking to exchange Whelan for one or more Russians held in American custody. They include Konstantin Yaroshenko, a pilot, who is serving a 20-year sentence for international drug trafficking, and Viktor Bout, an arms trafficker, who is serving 25 years after being convicted of trying to sell antiaircraft missiles and arms to terrorists.

However, unlike in Whelan’s case, the trials of both of those Russian citizens were public, as was the evidence to convict them. Officially, the Kremlin has denied plans to exchange Whelan.