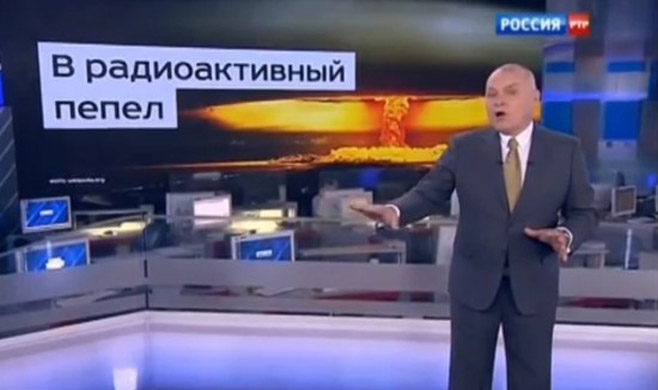 At a time when Russia’s image in Europe and the U.S. has sunk to extreme lows, the Kremlin has announced dramatic new plans to increase spending on foreign propaganda, The Moscow Times writes.

The Russian state budget includes a 41 percent increase for RT, the state-backed television network that broadcasts around the world in a number of languages. Rossiya Segodnya, the successor to the now defunct global news agency RIA Novosti, is set to see a tripling of its budget. These media investments ostensibly reflect the Kremlin’s ambition to win sympathies abroad. Upon closer inspection, however, Russia’s large and growing investment in international media is not about winning hearts through “unbiased coverage of events in Russia,” as President Vladimir Putin has claimed.

Instead, the Kremlin is focused on poisoning minds through an insidious mix of information designed to muddy the media waters and disorient international audiences. Seen in this context, Russia’s surging international media investment makes more sense.

In recent years, authoritarian government-backed media enterprises such as RT have rapidly expanded into world markets.

In a short period of time, RT ensconced itself on scores of cable systems and into nearly 3 million hotels rooms around the world. The station has, by its own reckoning, the capacity to reach more than 600 million people globally.

RT’s English, Arabic and Spanish language programming is only one part of a vaster constellation of Russian government media assets that include Rossiya Segodnya, as well as the Voice of Russia, TASS and Ruptly (RT’s video news agency).

Understanding the value of a global media platform, the Kremlin works diligently to extend its reach. During a trip to Argentina in July, Putin cut a little-noticed deal with his Argentinian counterpart Cristina Fernandez de Kirchner that allows RT’s Spanish-language channel to broadcast its content 24/7 to an audience of millions in Argentina, the first foreign channel to have this privilege in the country.

Part of the explanation for the just-announced large budget increase is to enable the development of new French- and German-language broadcasts on RT.

It is telling that the growth in resources devoted to media beyond Russia’s borders is now outstripping those within them. At home, the Kremlin’s censorship and mass media control prevent alternative ideas from entering mainstream discussion and enable the government to dominate crucial narratives.

The framing of the shoot-down of Malaysia Airlines Flight MH17 is a case in point. By virtue of a barrage of twisted information from Kremlin-controlled state television, many Russian citizens believe conspiracy theories that have no basis in fact, rather than the far more plausible explanation that Russian-backed insurgents shot down the plane.

Outside Russia, where Kremlin censorship cannot eliminate alternative views, the aim of Russia’s media is different. In settings with media pluralism, Russia’s goal is not to persuade audiences of the virtues of Kremlin policy but to create confusion and raise doubts about the facts of a given issue.

By muddling thinking about the Russian annexation of Crimea and use of military force to establish a frozen conflict in eastern Ukraine, the Kremlin seeks to prevent a coordinated and resolute response from the West.

Russia’s framing of the news gains traction when it resonates at some level with ideas that are already in viewers’ minds. Our research on the Russian domestic television audience suggests that state television is most likely to get its message about the Ukraine conflict across when it taps into deeply held emotions, for instance those linked to Russia’s victory in World War II or anti-Americanism stoked during the Cold War.

The Kremlin’s international propaganda applies a similarly cynical and manipulative approach, where it insinuates, for instance, that all societies are thoroughly corrupt and craven, suggesting moral equivalence between autocracies and democracies. RT unloads an endless stream of material seeking to portray the West, especially the U.S., in the most decadent of ways.

Russia’s media overlords are masters of television control, but also have adapted effectively to new media. Russian spin doctors have figured out how to exploit the information overload that is characteristic of the online media environment. The Kremlin seizes opportunities to shape narratives and twist public understanding in a freewheeling online world in which audiences do not have time or motivation to authenticate twisted information and outright fakery.

As media analyst Peter Pomerantsev observed, debunking false information is time-consuming and expensive; the Kremlin’s fabrication of information is easy and relatively cheap. While the Kremlin tightens restrictions on the Internet at home, state media takes advantage of opportunities to make deeper inroads online beyond Russia’s borders. RT’s YouTube channel has garnered more than 1.3 billion views. Even accounting for clicks from phony accounts, this is a staggering number.

Finally, Russia and authoritarian regimes claim that their media outlets are just like Deutsche Welle, BBC or Agence France-Presse, news organizations that operate under accountable and transparent editorial structures. In making this comparison, however, Kremlin spin doctors are really comparing apples to oranges.

RT operates under the direction of unchecked authoritarian political power and is therefore an entirely different enterprise. Accordingly, it should not be understood as a news outlet, but instead seen for what it is: a weaponized media instrument.

While it denies any meaningful space at home for independent voices, beyond its borders the Kremlin is flooding the media space with half-truths and outright lies with the aim of polluting audiences’ understanding of the world.

Given the serious stakes involved, the democracies must devise a far more thoughtful response  to meet the dual challenge of Russia’s intensifying censorship and modern propaganda.

By Robert Orttung, who is assistant director of the Institute for European, Russian and Eurasian Studies at the George Washington University’s Elliott School for International Affairs;

and Christopher Walker, who is executive director of the International Forum for Democratic Studies at the National Endowment for Democracy.