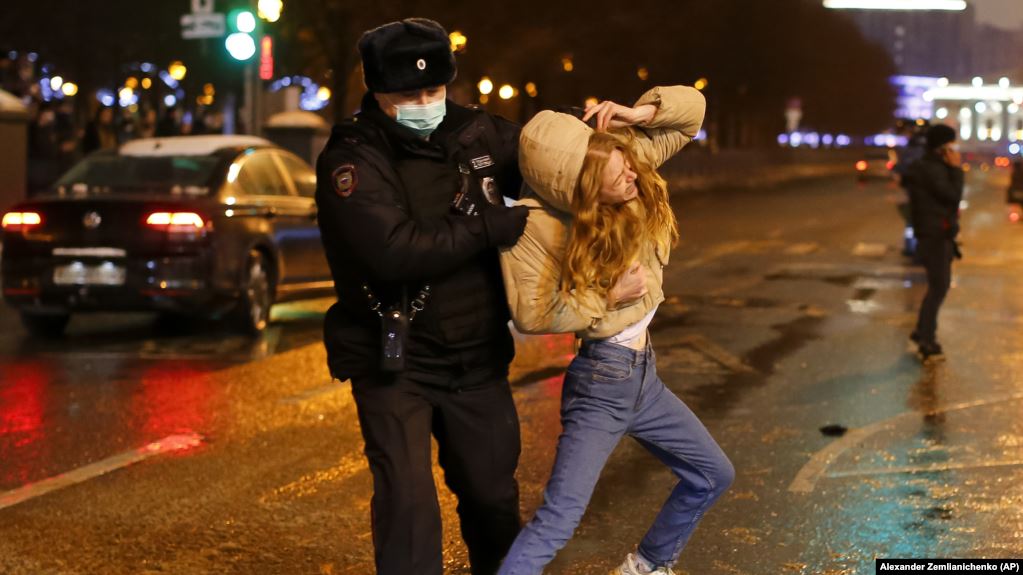 Russian Foreign Ministry
“U.S. Embassy in Moscow has shown disregard for diplomatic rules and regulations by actively posting messages on social media in support of unsanctioned protests in Russian cities. In essence, we are talking about encouraging violent actions.”
Source: MID.ru
FALSE

The Russian Foreign Ministry blamed the U.S. Embassy in Moscow for the nationwide demonstrations on January 23, when thousands took to the streets across Russia protesting Alexey Navalny’s arrest.

Navalny and the investigative website Bellingcat accused Russia’s Federal Security Service, or FSB, of planning and carrying out the poisoning using the Soviet-era nerve agent Novichok.

Navalny’s supporters in Russia called for protests, while some local authorities refused to grant protestors permission to assemble. Still, thousands took to the streets in more than 100 cities and towns across Russia, demanding freedom for Navalny and challenging Putin’s presidency.

Photos and videos showed riot police breaking up the demonstrations, attacking journalists, beating elderly and young protesters alike, and dragging scores of detainees into police cars. By the end of the day, the police had arrested some 3,600 protesters.

Governments and rights organizations worldwide condemned the Russian authorities for brutalizing the protesters and for Navalny’s arrest, and they urged the Kremlin to immediately release all prisoners.

Amid the international outcry, Russia homed in on one voice – that of the U.S. Embassy in Moscow.

The claims are false: None of the embassy’s posts encouraged violence.

Polygraph.info could find no messages or statements regarding the arrest of Navalny, the protests or the riot police brutality, or anything related to Russia’s political or human rights affairs, on embassy accounts on Facebook, Instagram and vKontakte – either before, during or after the protests.

On January 23, the embassy sent out five tweets on its Russian-language Twitter account reacting to Navalny’s arrest and the demonstrations.

The first tweet was a Russian-language summary of a statement made by the U.S. mission at the Organization for Security and Cooperation in Europe demanding freedom for Navalny.

The second tweet, translated from the Russian, stated: “We are following the reports about the protests in 38 Russian cities. More than 350 peaceful protesters and journalists have been detained. The U.S. supports the right of all people to protest peacefully, to freedom of expression. The measures taken by the Russian authorities are directed at suppressing these rights.”

The third tweet, translated from the Russian, reads: “The Russian authorities are arresting peaceful protesters and journalists. Seemingly, this is a coordinated campaign to suppress freedom of speech and peaceful assembly. In recent years, repressive actions against civil society, independent media and the political opposition have continued in Russia.”

The last two tweets were a summary and translation of a statement made by the U.S. State Department: “The United States strongly condemns the use of harsh tactics against protesters and journalists in cities throughout Russia.”

As can be seen, nowhere in the posts did the embassy encourage violence.

Russian Foreign Ministry spokeswoman Maria Zakharova claimed the U.S. Embassy used its website to “coordinate” the protests by posting the times and places of the planned demonstrations.

In fact, the embassy website post that Zakharova called a “manual for the protesters” was the standard travel alert that U.S. diplomatic missions abroad issue to warn American visitors of potential hazards.

“The priority of the U.S. Mission to Russia is the security of U.S. citizens in Russia, and that it is our responsibility to provide available information to them on potential security risks. This is the standard consular practice of many countries’ diplomatic missions,” the embassy told Polygraph.info.

Zakharova’s claim that the U.S. Embassy coordinated the protests ignores the fact that the times and places of planned protests along with detailed instructions were distributed via numerous websites, social platforms and messenger applications, run by Navalny supporters, hours before the embassy alert was sent.

On January 28, a court in Moscow rejected an appeal for Navalny’s release from custody and ordered him to be held for 30 days. Facing multiple charges and potentially years in prison, Navalny has dismissed all the allegations against him as “absurd” and politically motivated.

Navalny’s supporters announced that the nationwide rallies will continue while he remains in jail. The next round is scheduled to take place this weekend.