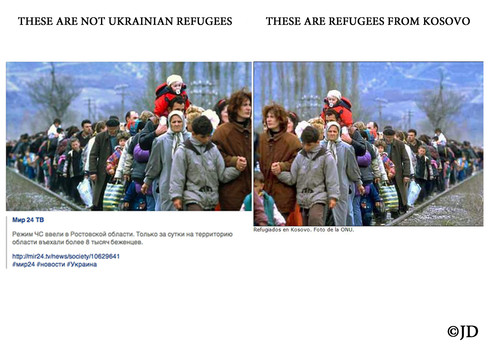 Russia’s aggressive propaganda machine keeps churning out falsehoods, provocations and outright lies about the situation in Ukraine. In spite of being repeatedly exposed, it shows no signs of slowing down. Disinformation is being laid on thick and poured out in a variety of forums: streaming down from the Kremlin, to Russia’s mainstream media, on to bloggers, down to useful idiots and hordes of paid trolls, who plague comment sections of articles about Ukraine and spread vitriol, hatred and blatant lies all over the social media.

You can review previous installment of the series of articles exposing these falsehoods by visiting the following link:

This photo of Kosovo refugees was falsely reported to represent thousands of Ukrainian refugees, allegedly escaping to Russia. In their statements to the media, Russian government officials grossly overstated the number of refugees from Ukraine. Photo on the left was alleged to be that of a soldier with the National Guard of Ukraine, supposedly cannibalizing the corpses of enemy combatants. In reality, it was taken from a web page demonstrating special effects and make-up for action movies. Ukrainian military was falsely accused of using phosphorus against the civilian population. The video shown by TV Station “Zvezda” and multiple other sources as the alleged evidence of the said atrocities was actually a 2004 CNN video from Fallujah, Iraq.

An intercepted telephone conversation revealed that Donetsk separatists were asking their collaborators in Russia to provide them with remnants of a phosphorus bomb, which would in turn enable them to better sell this fabrication to the media. One of the victims of the tragic events in Odessa was falsely represented by the Russian media to have been a pregnant woman, strangled with a cord. In reality, the victim, Anna Varenikina, was a 59 year old woman, who died from the combination of thermal damage, smoke inhalation and related poisoning. Video of a Russian tank, allegedly hit by the Ukrainian National Guard, in reality turned out to be a 2012 video of a Syrian army tank destroyed by the rebels. This outrageous misrepresentation came straight from Kremlin, echoing false claims disseminated by the Russian mainstream media. Russia’s Foreign Ministry accused Ukraine of building concentration camps, where dissenting ethnic Russians would be imprisoned by the authorities. In reality, Ukraine simply continued its 2009 project of building small detention facilities for illegal migrants, designed to hold no more than 100 people at a time. These facilities are very similar to other such detention centers across Europe. Ukrainian government officials expressed their outrage at the depths of depraved, twisted imagination that birthed such a far-fetched fabrication. Russian media, including NTV television program, alleged that members of the Ukrainian military attacked a funeral procession by the separatists. In fact, separatists themselves fired the shots into the air, but were not attacked by the military. This is apparent from the following video of the funeral. Russian media, referring to obscure blogs of conspiracy theorists, claimed that the U.S. refused to accept bodies of 13 CIA spies, allegedly killed when terrorists in Ukraine downed two military helicopters. In reality, two members of the Ukrainian military suffered deaths in these incidents; no foreign agents were present on board the helicopters nor suffered death during these events. In an NTV television segment, former “Russian Language Professor” falsely alleged that he was suddenly fired in March of 2014 for refusing to lecture his students in Ukrainian language. In reality, this was a Professor of Foreign Literature, who willingly resigned from his position on November 1, 2013. Russia’s Channel One and other prominent mainstream media falsely claimed that the Ukrainian government ordered the removal of trees from the Maidan, in an attempt to destroy the evidence related to the direction from which the snipers fired on the crowd of protesters. Local blogger from Kyiv conducted an independent investigation, refuting these false claims with photographs and video. Russian media outlets (including the one pictured, entitled the Russian Army Headquarters) that recruit and arm “volunteers” from Russia to engage in acts of terrorism on the territory of Ukraine under the guise of “fighting against fascism,” used a deliberately altered image of the Ukrainian tank, supposedly featuring a swastika.

The original image by Reuters did not contain any such markings. Russia’s Channel 24 invented an entire statement, allegedly made by the Ukrainian government. In this statement, journalists were allegedly threatened with imprisonment for unfavorable reporting about the situation in Ukraine.

Ukrainian government officials confirmed that no such announcement was ever made. In reality, the photograph in question was taken in June of 2013 during the theatrical performance about Kossack traditions. A 1995 photo of Russia’s notorious atrocities in Chechnya made media rounds as an alleged photo of the victims of the Ukrainian military. Photograph of Russia’s bombing of civilian populations in Georgia was represented as a depiction of the alleged bombing by the Ukrainian military in Donbass, Ukraine. Still shot from the video of Russia’s artillery drills using “Grad” systems was falsely represented to be the depiction of the Ukrainian military using “Grad” against the civilians of Donbass. Photograph taken in a Russian prison in 2005 was falsely represented as a photo of the Ukrainian military’s recruitment station. Russian propagandists went an extra mile by Photoshopping the colors of the Right Sector’s flag over the nameplate of one of the guards. A 2012 performance from a dance competition was falsely portrayed to be the Ukrainian celebration of the upcoming Euro integration in 2014. A photograph that was represented to depict the alleged brutality of the Ukrainian military against the civilians of Donbass, Ukraine in 2014 was actually a photo from Chechnya, taken in 2009.