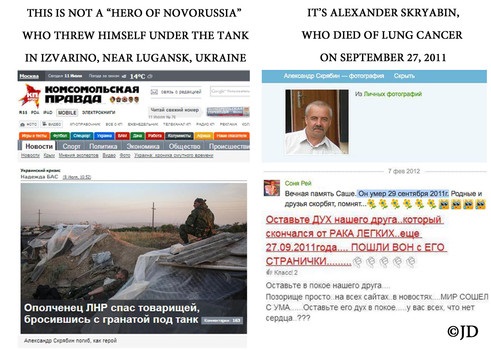 Russia’s aggressive disinformation campaign about recent events in Ukraine reached epic proportions. For example, Alexander Skryabin (who died of cancer in 2011) was revived by the Russian mainstream media to commit not one, but two sets of separate terrorist acts in Ukraine. Even after this fabrication was exposed, only Russia Today removed the article and published a retraction.

It should be noted that Russia’s information war is waged not only through its mainstream media. Years ago, Kremlin recognized the power of social media and decided to exploit it. Government-funded campaigns include expatriate Russian bloggers in Germany, India, and Thailand. American conservative bloggers were also paid to write pro-Yanukovych stories, denouncing the Ukrainian revolution and spreading falsehoods about “fascists and Nazis” allegedly controlling the new government of Ukraine.

Since Russia’s information war against Ukraine is multifaceted, it’s important to recognize and address all of its manifestations, including not only the mainstream media, but also bloggers and trolls. Together, they work to infect public opinion, spreading hatred and war-mongering.

On July 7, 2014, Russian mainstream media exploded with a stream of articles about Alexander Skryabin, an alleged hero of nonexistent Novorussia. Pseudo-“heroic” tales of armed separatism were published by Komsomolskaya Pravda, Vesti, the portal for the Communist Party of the Russian Federation, NTV, Gazeta and many others. No one seemed to be perturbed by the fact that Alexander Skryabin died of lung cancer on September 27, 2011. Even after the truth was exposed, only Russia Today removed the article and published a retraction. The rest of the publications merely removed Skryabin’s photo from their articles, but failed to delete the made-up story of postmortem terrorism.

In the first article, a deceased cancer patient blew himself up and a Ukrainian tank with a bundle of grenades, to save his comrades, fellow separatists. The same social media source who bragged about getting Russian mainstream media to disseminate the fake Skryabin story, also posted a photo of his alleged burial. In reality, the burial in question had absolutely nothing to do with Skryabin. It depicted the burial of Donbass miners who perished as a result of an industrial accident. Notorious propagandist Aleksandr Dugin, Russia’s madman ideologue, who exclaimed that Ukrainians must be “killed, killed, killed,” routinely lies about events in Ukraine. He spreads misinformation and encourages violence not only in media appearances, but also on social media. Here is a screenshot of Dugin’s posting on his Facebook page to his 16,719 followers. Three of these images were already exposed as fake/unrelated to the events in Ukraine in previous installments of this series (here and here). The image pinpointed with the arrow is similarly misrepresented as that of a child Dugin claims was “murdered by Poroshenko” for being Russian. In fact, it is a Russian child – murdered by her own father in Russia, in 2013. The same photo was repeatedly used by Russian media outlets in reference to other stories of child abuse. It is most certainly not related to the ongoing events in Ukraine. Center for Coordination of Assistance to (nonexistent) Novorussia, responsible for providing military, financial and material aid to terrorists dispatched from Russia to Ukraine, produced this image of a woman allegedly murdered in Ukraine, warning that the same kind of violence might soon cross over into Russia. In fact, this is a 2013 image that shows a female protester against bullfighting in Spain. This photo accompanied a horror story, in which Ukrainian Member of Parliament Oleh Liashko allegedly tortured the mother of a separatist, by burning her back with the cigarette lighter. In reality, this picture was taken in 2010. It depicts the back of a 3-year-old child, who had “wings” burned into his back by his parents, a pair of Russian religious fanatics from Chelyabinsk. This is not the National Guard of Ukraine, allegedly being equipped to use chemical weapons. The same photo was disseminated by some of the most notorious pro-Russian trolls. The photo depicts Russian military’s exercises on October 11, 2013, training “to exterminate any living creatures within 3 square kilometers.” This photo of the Lac-Mégantic derailment is particularly popular with anti-Ukrainian news fakers the world over. It was previously exposed in the “Top 20” installment of this series, where it was falsely labeled as the image of Slavyansk. Now the same image is being circulated as an alleged battle for the airport of Kramatorsk, Ukraine. This news report falsely exclaimed that all men of Slavyansk, Ukraine were placed into concentration camps, where they are being tortured, beaten and forced to sing the hymn of Ukraine. In fact, no such thing took place and the photo used to illustrate this made-up story is that of a Dachau concentration camp, built in Germany in 1933. This puppy-eating sadistic Neo-Nazi is not a member of the Ukrainian National Guard. In fact, that is Alexei Milchakov of St. Petersburg, Russia. He traveled to Ukraine to fight alongside the terrorists/separatists. Ministry of Foreign Affairs of the Russian Federation baselessly expressed their “concern” about the alleged appearance of American mercenaries/contractors in Ukraine. The image on the left was repeatedly shown on Russian television. It was Photoshopped to remove American street signage, since the original Reuters image depicts Blackwater contractors in New Orleans, Louisiana. These facts were addressed by Ambassador Daniel B. Baer to the Permanent OSCE Council (even though the Russian Ambassador rushed out of the room). This graphic image, described as Donbass, Ukraine is in fact one of many images depicting Russia’s horrific war atrocities in Chechnya. This photo was used to claim that pictured American contractors were currently fighting in Kramatorsk, Ukraine. This image (complete with a palm tree in the background, although palm trees do not grow in Kramatorsk) has been used by the Russian media since at least 2012. Ivan Okhlobystin is a notorious homophobic Russian actor/propagandist and a Russian Orthodox priest, who infamously said that homosexuals should be burned alive in crematoriums. He is a rabid proponent of violence against Ukrainians and destruction of Ukraine. Okhlobystin posted a Photoshopped image on the left on his Twitter account with 991 thousand followers, claiming that it depicted a celebration of mayoral elections in Kyiv, Ukraine. In fact, the original image was taken at a 2008 gay parade in Paris. Russian mainstream media falsely claimed that Ukrainian pilot Nadezhda Savchenko was arrested by the Russian authorities when she “attempted to enter Russia as a refugee.” This was a crude fabrication, since Savchenko was captured by terrorists in Ukraine on or about June 19, 2014 and was never released from captivity, having been covertly transported to Russia and falsely imprisoned. Russia’s television channel Russia 24 and Vesti news outlet falsely claimed that one of the best art galleries of the Czech Republic was hosting an exhibit about the Odessa tragedy. In fact, the exhibition took place in the waiting area of the offices of the Communist Party in Prague. True to form, notorious for its repeated falsehoods, Russian news outlet LifeNews claimed that the photograph on the left depicts the battle between the separatists and the Ukrainian military on the border with Russia on July 12, 2014. In fact, the photo they used is a screenshot of the video filmed on July 5, 2014 near Saur-Mohila, which is not located on the border with Russia. The Nazi theme is very popular with anti-Ukrainian fakers. The image on the left is falsely described as that of Ukrainians in 2014. In fact, this is the image of Russian Nazi Skinheads from Moscow. This child is not a victim of the Ukrainian military’s shelling in Donbass. In fact, it’s a funny photo of a mischievous boy from a Russian website.