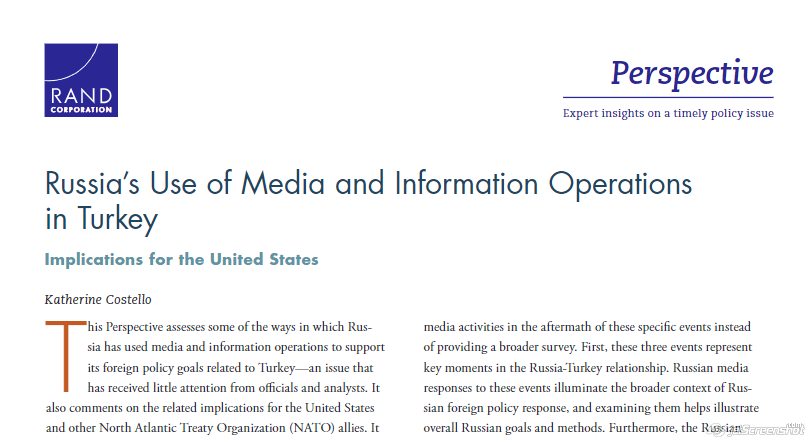 By Katherine Costello, for RAND

Russian media have sought to undermine Turkey’s political and security cooperation with the United States and Europe by exacerbating mutual skepticism and highlighting policy differences. In Turkey, Russian media have also contributed to anti-American discourse and have reinforced and informed the Turkish government’s own propaganda pursuits. This analysis assesses how Russia has used media and information operations to pursue its foreign policy goals related to Turkey. It examines Russian media responses to three significant events in Turkey: (1) Turkey’s November 2015 shootdown of a Russian military aircraft, (2) the July 2016 Turkish coup attempt, and (3) the December 2016 assassination of the Russian ambassador. Russian media efforts following these events exemplify the propaganda strategies of amplification of genuine uncertainty, creation of opportunistic fabrications, and use of multiple contradictory narratives. These strategies have supported Russian foreign policy objectives, which include undermining the North Atlantic Treaty Organization (NATO) and fomenting mutual suspicion between Turkey and its Western allies; enlisting Ankara’s support and impeding its opposition to Russian actions in Eurasia and the Middle East; and influencing Turkish internal political developments to make Turkey a more compliant partner. The U.S. government, NATO, and independent media watch groups should take steps to monitor Russian media efforts in Turkey and outside coverage of Turkey. In addition, the U.S. government, other governments, and media watch groups should continue to monitor Turkish government efforts to stifle independent media in the country and to create a propaganda arm that may emulate well-honed Russian practices.

By Katherine Costello, for RAND