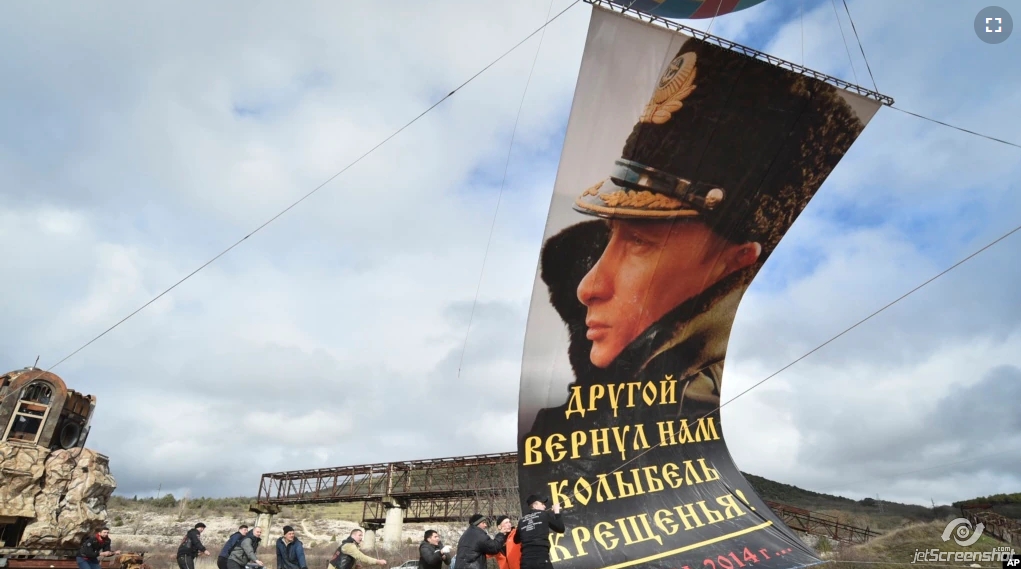 Russian Embassy in the USA Twitter account
Official social media account
“Seven years passed since the people of #Crimea stood against coup d’etat in #Ukraine. Hundreds of thousands of Crimeans took part in a referendum to protect their home and further choice – to come back to @Russia”
Source: Twitter, March 16, 2021
FALSE

On March 16, the Russian Embassy in the United States tweeted a message celebrating the Crimeans’ “choice” to “come back to Russia” seven years ago this month.

The tweet included photographs of crowds in Crimea waving Russian flags and an infographic purporting to show a sample ballot from the March 2014 “referendum,” together with its alleged results and turnout.

“Seven years passed since the people of #Crimea stood against coup d’etat in #Ukraine. Hundreds of thousands of Crimeans took part in a referendum to protect their home and further choice – to come back to @Russia”

Nearly everything about the tweet is false. That includes misleading photos, which show celebrating crowds but no Russian soldiers. In fact, the Russian military played a crucial role in occupying key government buildings and military bases around the peninsula, allowing Russia’s proxies in the Crimean parliament to organize the so-called referendum splitting the peninsula from Ukraine.

Initially, the Russian forces wore no insignia, and President Vladimir Putin denied the presence of Russian troops in Crimea, despite the fact that these forces were obviously wearing Russian uniforms and using Russian equipment and vehicles. Later, Putin admitted they were Russian military personnel.

The next red flag in the tweet is its reference to “Crimeans,” as though they are a specific nationality. In fact, the population of the Crimea is mixed: a majority is ethnic Russian but more than 30 percent are Ukrainian or Crimean Tatar.

The Crimean Tatars, whom Soviet dictator Josef Stalin deported en masse to Central Asia in 1944 and who comprised nearly 13 percent of the peninsula’s total population at the time of the 2014 annexation, boycotted the Russian-orchestrated “referendum.”

In addition, the figures on the referendum’s results and turnout cited in the tweet’s infographic should be viewed skeptically. It repeats the official Russian claim that 96.8 percent of the peninsula’s population voted to join Russia, with 83 percent of the populace turning out to vote. Ethnic identity doesn’t necessarily determine voting results. However, given Crimea’s significant number of ethnic Ukrainians and the Tatars’ boycott, those figures are highly questionable.

In May 2014, the President of Russia’s Council on Civil Society and Human Rights reported that 50-60 percent of those who participated in the referendum voted in favor of joining Russia, and that voter turnout was only 30-50 percent. Those results appeared on the council’s website only briefly before disappearing.

The Organization for Security and Cooperation in Europe (OSCE) declared the 2014 referendum in Crimea illegal and, after OSCE military observers reported being fired upon by Russian soldiers , it chose not to send a mission to monitor the voting.

Russia brought in its own “election monitors,” mostly members of far-right European political parties. Russia has a history of using such “observers,” many of whom have no qualifications or training in election monitoring.

The Russian embassy tweet’s infographic also shows the biased alternatives that 2014 referendum voters had to choose from:

– “Are you in favor of the reunification of Crimea with Russia as part of the Russian Federation?”

– “Are you in favor of restoring the 1992 Constitution and the Status of Crimea as a part of Ukraine?”

While the latter option might appear to have allowed Crimea to remain part of Ukraine, the country’s 1992 constitution, which was in force for only a brief time, made Crimea an independent republic within Ukraine, with its own laws taking precedence over Ukrainian law. Had that option won, Crimea still could have been occupied by Russian forces and joined Russia later. As such, the ballot provided no clear option for the peninsula to remain unequivocally part of Ukraine.

Along with these irregularities, the referendum was organized in just 10 days, with virtually no public campaigning against it allowed. Activists who opposed the measure were harassed, and a Crimean Tatar activist who disappeared during a protest against the annexation was later found dead, with his body showing signs of torture.

Most countries do not recognize the legitimacy of either Russia’s claim to Crimea or the 2014 referendum it organized there. On March 27, 2014, the United Nations General Assembly adopted Resolution 68/262, which declared both the referendum and Crimea’s new status as part of Russia invalid.

Individuals and companies associated with Russia’s annexation of Crimea, as well as those doing business there, are subject to international sanctions. In 2016, the International Criminal Court determined that Crimea’s annexation constituted an international armed conflict between Russia and Ukraine.