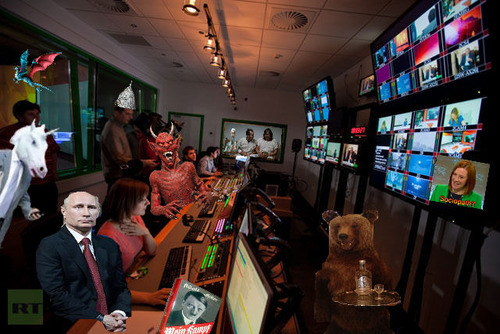 The midgets who rule, with a tiny iron fist, over the dumpster fire known as Russia learned a lesson from their Soviet predecessors. That lesson: a lie repeated often enough is accepted as truth. That is why they launched a multimedia ‘news’ channel known as Russia Today, exclusively for a foreign audience to get a ‘Russian perspective’ of the news.

The formula employed by RT aka Russia Today.

That would indeed be a fine and interesting channel. Many countries have similar projects; BBC International, Deutsche Welle, Voice of America, France24 and even China Central TV. However, due to the Kremlin’s denial of human rights, mafia style governance and repeated attacks against neighboring states most people are smart enough to know something called Russia Today is going to be dishonest. Thus, RT was born; and many people who were smart enough not to be fooled by something called Russia Today are indeed dumb enough to listen to something called RT. This ‘news’ channel is surprisingly popular because it exploits the far-right and far-left sentiments of the American and European audience who believe their government and media are nothing more than lying snakes. For reasons I cannot comprehend they choose to turn to the propaganda arm of one of the world’s most dishonest regimes. Some people actually rely on the guy who killed and buried freedom of the press to tell them what is happening in the world.

The retractions provided by RT are few, but sometimes their lies are so incomprehensible that they must retract them. My favorite example is when they claimed the Rand Corporation was working with the Ukrainian army to commit genocide and harvest organs for sale. You may have heard of the Rand Corporation if you have a friend who wears a tinfoil hat and talks about the Illuminati, the Elders of Zion and the lizard people who control everything. RT even presented a piece of paper purported to be from the Rand Corporation, complete with spelling errors and sentence syntax which led many to believe it was poorly translated from Russian. Rand is a real company, with real lawyers, that forced RT to admit to their half-assed forgery.

According to the Kremlin: the Rand Corp, in conjunction with the Ukrainian army, is setting up concentration camps and harvesting organs to sell in other countries.

Since there have been many fine pieces written on RT, and their agenda of outrageous lies, that I will instead provide you with the following: There was a Russian submarine stuck near Stockholm. Shockingly, RT chose not to devote time to this story. Russia banned apples from Poland, as punishment for their opposition to Russia’s invasion of Ukraine. To support apple farmers Poland came up with the brilliant slogan ‘An apple a day keeps the Russians away.’ Conspiracy theories to make people forget that Russian army regulars shot down Malaysia Airlines flight 17 are a staple at RT. Was the plane full of dead people before it took off? Did the Ukrainians shoot it down because they thought it was the plane of Russia’s favorite midget dictator? Were dragons in anyway involved? Ukrainian soldiers were each promised two Russian slaves. The mainstream media is ignoring this. Possibly due to pressure from the Rand Corporation. One of RT’s favorite employees, UK citizen Graham W. Phillips, was arrested by Ukrainian authorities. He is noted for being a sex blogger, having police action taken against him back in England, and claims so outrageous that even RT had to retract them. Mr. Phillips is now at large, involved in a relationship with an underage girl, spending time with child soldiers and being trained in the use of firearms.

Using this formula we can deduce how previous events in history would have been reported, had RT been around. The Moon Landing. One of RT’s favorite boogeymen is a marginal Ukrainian group called Right Sector. Since listening to Russian media would lead you to believe Right Sector has an army slightly larger than China’s it is feasible they landed on the Moon to join forces with the Rand Corporation in committing genocide against peaceful Moon people.

Please note that RT is merely the international version of the Kremlin’s media holdings, known as Rossiya Segodnya; which translates to Russia Today. RT is for foreign consumption, the things reported in domestic Russian media makes RT look like a fount of truth. Virtually all media is controlled by the Kremlin, with the sole intention of convincing their audience that Russia has the world’s best government, and every other place in the world is awful and you should stop demanding human rights or your children will become gay Nazis. Did you know the protests in Ferguson, Missouri were in response to the Obama’s administration stance on Russia? 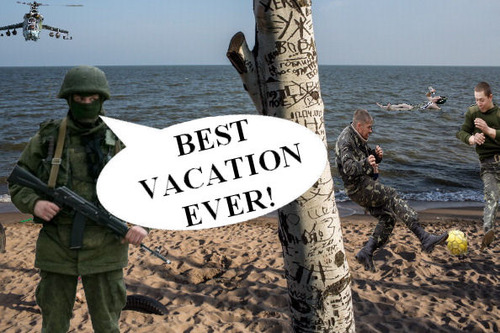 Did you know that 90% of the invading forces in Ukraine are merely Russian army soldiers on vacation? The Russian army is apparently a great career option; you get 6 months vacation and you’re allowed to take your tank and surface-to-air missile system with you. Did you know many of the Russian soldiers captured in Ukraine got lost? It is unreasonable to expect Russian commanders to make sure their soldiers don’t wander 40 miles into another country. Dmitriy Kiselev, Russia’s answer to Josef Goebbels, would like to remind you that he can jazz hand America into radioactive ash. The cumulative effects of Russian media is akin to having a brain slug.

How does the Kremlin get away with this? Western media is largely to blame. Europe’s most significant war since 1945 just isn’t as sexy as ISIS, Ebola or a missing plane. At least we get the important news, such as those things that can stop you from reclining in an airplane. They are the worst thing to happen to air travel, edging out incompetent Russian soldiers with missiles that can take down that plane.

Despite all of this I am optimistic that one day, in the not too distant future, you will turn on the TV and see this: