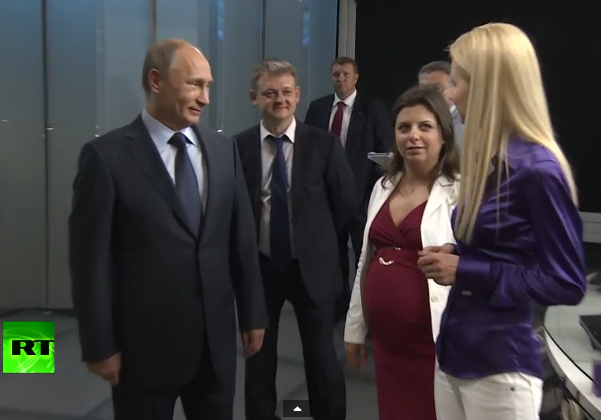 Russian President Vladimir Putin has created an anti-CNN for Western audiences with the international satellite news network Russia Today. With its recipe of smart propaganda, sex appeal and unlimited cash, it is outperforming its peers worldwide.

The political evening program often kicks off with a mixture of chaos and tabloid news. Abby Martin, the American host working for the Kremlin, has her lips slightly parted and is applying red lipstick, which goes well with her black top, high heels and ankle tattoo. Then she swings a sledgehammer and destroys a TV set tuned to CNN, the American role model and nemesis of her employer, the Russian international satellite TV network Russia Today, writes Benjamin Bidder in his article for Spiegel Online (Translated from the German by Christopher Sultan).

This show opening is apparently meant to illustrate one thing over all else: that Russia is aggressive and enlightened — and looks good in the process.

A photo of Edward Snowden, the whistleblower the United States wants to bring home to face charges, is projected onto the studio wall. Then there is a report on the detention camp at Guantanamo, which has hurt America’s reputation. Russia Today uses the source material America supplies to its rivals untiringly and with relish. Even Washington’s relatively minor peccadilloes don’t escape notice. For instance, the show also includes a story about Gabonese dictator Ali Bongo Ondimba, whom US President Barack Obama supports.

Many in the West are also interested in seeing critical coverage of the self-proclaimed top world power. Russia Today is already more successful than all other foreign broadcast stations available in major US cities, such as San Francisco, Chicago and New York. In Washington, 13 times as many people watch the Russian program as those that tune into Deutsche Welle, Germany’s public international broadcaster. Two million Britons watch the Kremlin channel regularly. Its online presence is also more successful than those of all its competitors. What’s more, in June, Russia Today broke a YouTube record by being the first TV station to get a billion views of its videos.

The station was even more triumphant when it signed Larry King, a legend of American radio and TV journalism who began working for Russia Today this summer. Before that, King was the face of CNN for 25 years. His suspenders are even more striking than Abby Martin’s lipstick antics. “America’s best known TV interviewer is defecting to the Russians,” wrote the London-based Times in May.

King and his new colleagues have a simple assignment: They are to “break the monopoly of the Anglo-Saxon mass media,” President Vladimir Putin said during a studio visit a few weeks ago. The Russians’ recipe for success has three ingredients: sex appeal, which has been atypical for most news channel; a rigidly anti-American stance; and a never-ending flow of money from the Kremlin.

The Ministry of Media Defense

Since 2005, the Russian government has increased the channel’s annual budget more than tenfold, from $30 million (€22.6 million) to over $300 million. Russia Today’s budget covers the salaries of 2,500 employees and contractors worldwide, 100 in Washington alone. And the channel has no budget cuts to fear now that Putin has issued a decree forbidding his finance minister from taking any such steps.

The Moscow leadership views the funds going to the channel as money “well invested,” says Natalya Timakova, the press attaché to Prime Minister Dmitry Medvedev. “In addition, Russia Today is — and I hope the Germans will forgive me for this remark — significantly more modern than Deutsche Welle, for example, and it also has more money.”

The government has also spent a lot of money on the new broadcasting center in northeast Moscow, which Russia Today moved into in May. The station, citing confidentiality requirements, isn’t willing to quote an exact price tag. On the grounds of a former Soviet tea factory, the broadcaster is now creating programming in Arabic, English and Spanish. In 2009, it rebranded its English- and Spanish speaking divisions as simply “RT.” The evening news is currently focused on the euro crisis, social protests in Portugal and the NSA surveillance scandal.

Russia Today sees itself as a champion of a global audience critical of the West. But it is also meant to amplify the self-doubts of Europeans and Americans who have been forced by recent events to wonder if their own countries — like Russia and China — are corrupt and in the grip of a pervasive intelligence apparatus.

In any case, the station has a rare knack for propaganda. The average age of the Russian editors is under 30, and almost everyone speaks fluent English. To spice up the news, directors sometimes use Hollywood-like special effects, such as a computer-animated tank that looks like it is rolling over the newscaster’s feet or Israeli fighter jets that fly a virtual loop through the studio before dropping their bombs over a map of Syria. There is also a logic behind such visual effects, especially since the station sees itself as a sort of ministry of media defense for the Kremlin.

An Arms Race on the Airwaves

Margarita Simonyan is the woman who shaped Russia Today into Russia’s most effective weapon in the battle for influencing the opinions of the global public. In her office on the eighth floor of its headquarters in Moscow, the editor-in-chief has Orthodox icons on her desk and a dozen flickering screens around it. Putin made Simonyan the head of the new station in 2005. At the time, she was only 25 and derided as an unknown reporter from the crowd of journalists that accompany the president at meetings.

Simonyan’s mission is to prevent Russia from ever losing a war of images like the one it did in August 2008. At the time, Russian tanks were advancing into the southern Caucasus, stopping just short of Tbilisi, the capital of the small country of Georgia. The young Georgian president at the time, Mikheil Saakashvili — eloquent and educated in the United States — appeared on all channels to condemn Russia as an aggressor, even though he had provoked the war and was the first to order an invasion of the separatist republic of South Ossetia, which has close ties with Russia.

CNN showed images of destroyed buildings, allegedly taken after a Russian bomb strike on the Georgian provincial city of Gori. According to Russia Today, however, they were actually shots of the South Ossetian capital of Tskhinvali after a Georgian attack. “There is no objectivity,” Simonyan says today, “only approximations of the truth by as many different voices as possible.”

Mistrust of the domestic media is also greater than ever in the United States. CNN, for example, is struggling to cope with a massive loss of viewers. And sometimes US politicians make it particularly easy for the Russians to launch their attacks. When the plane carrying Bolivian President Evo Morales was forced to land in Vienna because US intelligence agencies believed that Snowden was on board, Abby Martin expressed what many were thinking: “Who the hell does Obama think he is?”

At the same time, Russia Today also uses a chaotic mixture of conspiracy theories and crude propaganda. On the program “The Truthseeker,” the attack on the Boston Marathon, in which two ethnic Chechens killed three people with bombs in April, mutated into a US government conspiracy.

Peter Oliver, Russia Today’s Berlin correspondent, has absurdly accused ZDF, one of two public German broadcasters, of engaging in bribery. Oliver claims that the network paid intellectuals to say positive things about the anti-Putin group Pussy Riot. As his star witness, he interviewed the editor-in-chief of Zuerst!, a monthly magazine published by German right-wing extremists.

This is the company that legendary talk show host Larry King has joined. In 2000, King conducted the first major interview with Putin on Western television. Since then, the talk show legend has raved about the Russian politician’s charisma. Putin, he says, has qualities that “change a room” and “a certain magnetism.”

Abby Martin, the woman with the sledgehammer, recently had her new colleague King as a guest on her own show. At a certain point in the interview, he became critical of “pundits who are not journalists” who use guests as “a prop for their opinion.” Perhaps the great Larry King still hasn’t figured out that this is precisely what he is on Putin’s new station: a prop and a trophy.