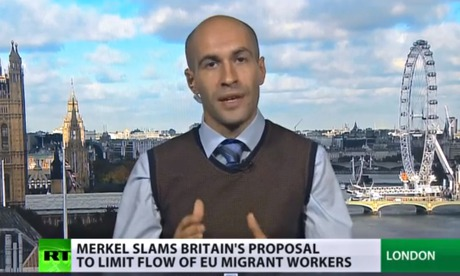 Vladimir Putin is the world’s corrupt policeman, Nick Cohen writes in his article for www.theguardian.com.

He finds the seediness in every country and nurtures it. On some occasions, he exploits cynicism and paranoia at once; on others, he banks it for later use. Often he appears to fan corruption for the hell of it because that is all he knows how to do.

The posters appearing on British advertising hoardings promoting his propaganda channel give a notion of the scale of his effort. His underlings have rebranded his Russia Today station “RT” – in the hope that its dumb viewers will not realise that they are watching a channel whose political line follows the Kremlin line with puppyish eagerness. While reputable news organisations from the BBC to the New York Times fire news reporters who try, however inadequately, to tell the truth, Russia Today has extended its reach. Putin is about to increase its $300m budget by 40%. Its resources will soon compare with Fox News. But while Fox serves the peculiar tastes of the American right, Russia Today has global ambitions. The channel broadcasts in English, Arabic and Spanish and can reach 600 million people. It claims to have surpassed a billion hits on YouTube, and will add German- and French-language channels. For the supposedly pariah leader of a country whose population is collapsing and mafia economy stagnating, Putin has the best publicity money can buy.

Anyone who writes critically about him soon learns the price of lese majeste. BuzzFeed revealed that state-sponsored Russian trolls maintain a Stakhanovite regime of tweeting and commenting on hostile news pieces as they spread the Kremlin’s message across the web. (Hello down there in the comments, by the way. Hope the sanctions aren’t hurting the pay cheques.)

The reaction of the naive observer to Russia’s prostitution of journalism is to think its elite has found a new way to steal from the Russian masses. The obvious question is the best one: what’s the point? However many the communists killed, Marxist-Leninists still persuaded people to follow them in large numbers until the 1970s. No one tries to persuade you today that Britain or any other country would be happier if the prime minister had Putin’s dictatorial powers and the state became a collection of thieves without an independent judiciary, opposition parties or free press to constrain it.

But the reality of modern Russia is not the impediment it seems. Suppose instead of trying to sell you Putin, Russia Today were to sell you the idea that Britain is as bad as a dictatorship. You might agree, however foolish the sentiment. If you are campaigning for change in a manifestly imperfect but still free and prosperous society, you exaggerate in the hope of attracting attention. (If the government passes this restriction on freedom of speech, we’ll be no better than Iran. If the Tories stay in control of the NHS, we’ll have third-world hospitals and so on.) A lie is still a lie, even if it is made in a good cause. But I can see why people do it.

The disbelief that oozes through much of public debate in our time is rarely in the service of any cause, however. It is radical indifference; a furious determination to condemn accompanied by an equally determined refusal to commit. Like Russell Brand, millions of people don’t want to say what change they want to see, because a commitment would force them to take a position and lay them open to attack.

They aren’t cynics but pseudo-sophisticated innocents. They shout “liar” automatically at everyone who tries to rule over them – and doubtless they are right more often than not. But to dispense with the search for proof – the need to demonstrate that the politician or banker is lying – leaves the supposedly wised-up open to capture by cults, conspiracy theorists and Russia.

The Institute of Modern Russia releases a report this week that shows how the collapse of communism liberated Moscow. Communists had to pretend to support leftwing movements – Putin can support anyone. Where the old communists claimed the Soviet Union was freer and more democratic than the west, Putinists claim “all liberalism is cant and anyone can be bought”. Russia Today feeds the huge western audience that wants to believe that human rights are a sham and democracy a fix. Believe that and you will ask: what right have we to criticise Putin? At least he is honest in his way.

Russia Today’s second mission is to spread conspiracy theories that help Russian power and provide sensational audience-grabbing stories – in every sense of the word. If you have heard that the Ukrainians who oppose Putin are fascists, that there is a land called “Novorossiya” in south-east Ukraine that historically belonged to Moscow, or that Assad did not gas Syrians, the odds are the story will have started on Russia Today.

Occasionally, its journalists have crises of conscience – Sara Firth, a London-based correspondent for Russia Today, resigned because of its lies about flight MH17. But replacements can always be found among the ranks of the desperate and unscrupulous.

I said that no one believed Putin offered a future for humanity. But his post-communist, postmodern flexibility means that many are prepared cut a deal when the bent copper makes an offer. Alex Salmond admires him because the break-up of Britain is in Russia’s interests. Nigel Farage, Marine le Pen and all the other leaders of Europe’s far right run to him because he shares their hatred of the EU. Despite his alliance with what we once called neofascism, the old communist left in Germany, George Galloway and Julian Assange support him because opposition to the west trumps anti-fascism in their book.

Russia Today provides a platform for anti-fracking greens because Putin wants us to remain dependent on Russian oil and gas. Viktor Orbán and Recep Tayyip Erdogan see how Putin has accumulated dictatorial power in Russia and wish to imitate him in Hungary and Turkey. London’s banks and law and PR firms work for him because the oligarchy pumps money their way. In Europe and at the United Nations, bigots of all descriptions welcome Putin’s leadership in fighting calls for gay equality and religious freedom.

However battered he looks, Putin knows how to manipulate all he comes across. It is about time the rest of the world knew it too.