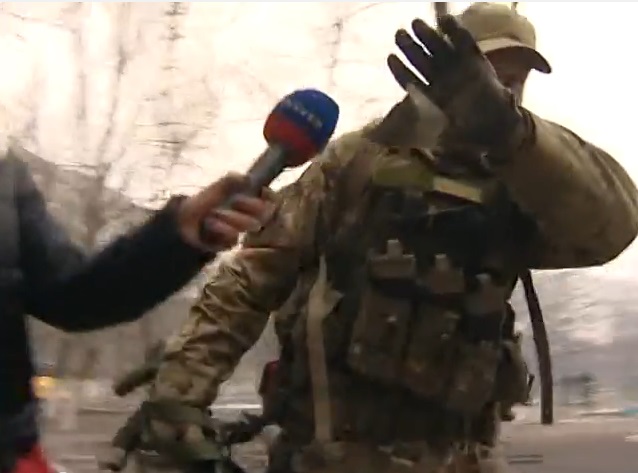 A court rejected the attempt by the Soldiers’ Mothers of St. Petersburg to remove the designation of “foreign agent,” despite the fact that the group has no foreign funding.

Are There Foreign Soldiers Fighting in the Azov Battalion?

In recent days, Russian state media and pro-Kremlin news outlets have been going full tilt with a claim that “NATO is fighting in Mariupol.”

Yesterday, the international community converged on Moscow with condemnation of the Russian-backed militants’ shelling of Mariupol in which 30 people were killed and 90 wounded  — by a Grad crew commanded by a Russian officer, as the spotter arrested by Ukrainian authorities reported.

The responsibility for the firing of numerous Grad rockets on Mariupol appeared unmistakeable, as the separatists had clearly-established positions to the east of the city and many of the Grad rockets lodged in roads showed their trajectory was from the east.

So in response, there has been a barrage of Kremlin counter-propaganda claiming that “NATO is in Ukraine”. President Vladimir Putin gave a paranoid speech yesterday, in which for the first time, he characterized Ukrainian forces as a “NATO foreign legion.”

As there was no evidence for this “NATO foreign legion,” Russian propagandists came up with an incident claiming a soldier who told a camera-crew “out of my face” in idiomatic English was from NATO. The clip was broadcast on Russia’s TV1 and other channels:

At 0:41, the soldier can be seen putting his hand up in front of the camera and saying “out of my face”:

Possibly the soldier spoke in English, even though the TV journalist spoke in Russian, because he saw the English letters “MTV” which isn’t music television but stands for “Mariupol TV”.

This is a problem for “LifeNews,” as well, which seems to have wanted to give itself more international recognition by calling itself an English name — but which then can be perceived by locals as a foreign camera crew.

Maybe the soldier simply thought that was a great expression he had heard on TV.

But Russian propagandists have a more damning clip, which they take from the Azov Battalion video (which we reported January 24) in which a soldier is heard speaking at length to the cameraman about a Grad missile crater in a school yard:

At 0:11, we can see a soldier wearing his cap backwards, in the American style:

This soldier’s accent isn’t American but it might be British or Australian although he doesn’t sound like a native speaker, as he speaks in very short sentences, without proper grammar, drops articles, and has an unaspirated “k” in the word “school.” Here’s a transcript of the dialogue:

So it’s not confirmed that the person speaking English is in fact a foreigner — “blow up” and “school” are two words not pronounced like a native speaker.

It seems as if both videos are covering the same man with a khaki-colored cap and a green backpack. At 0:43 in the first video:

Why would both the cameraman and the other soldier speak in English at the end of this video footage of a devastated Mariupol?

One possibility is that the Azov cameraman, throughout the video, kept creating ready-made stand-alone clips that might be used in a television broadcast. Multiple times throughout the video, he stops people in the scene, asks them to introduce themselves, and asks them to repeat several times the name of the location and the city where they were, i.e. “School No. 5” and “city of Mariupol” — even though these facts were already obvious to the cameraman.

So perhaps the cameraman was hoping to create a ready-made episode that he could give to foreign news that would prove in particular a particularly dangerous situation — unexploded rockets in a school yard.

To be sure, there might actually be a foreign volunteer in Azov. Azov, an ultranationalist battalion known for its symbols similar to Nazi insignia, has received enormous scrutiny from some foreign and Russian media, because it seems to embody the worst case of much-feared Ukrainian nationalism.

Azov is said to have a Swedish white supremacist named Mikael Skillt in its ranks, and other European recruits seem to have been attracted to the battalion, according to Wikipedia.

The reason the fighter in the video may not sound like a native English speaker is that he could be Swedish or French or some other nationality, and English is a lingua franca with the Ukrainian soldier.

So perhaps this one man is a foreigner fighting for the Azov Battalion, but it hasn’t been proven.

Azov hasn’t commented on the allegations of having foreign fighters among them, and there hasn’t yet been any credible media investigating the story.

The mystery of the foreign fighter in Azov Battalion has been solved, thanks to a reader:

Are There Foreign Soldiers Fighting in the Azov Battalion in Ukraine? http://t.co/ZCEIfzoUkn pic.twitter.com/DiJOMX8mMb

So Garrett is British, not American, and the reason he spoke in such short, clipped sentences was that he was busy with the job he came to Ukraine to do: de-mining. Thus, there are no “NATO legions,” but just a British specialist who came to Ukraine to help. No doubt the teachers and children of Day Care Center No. 5  in Mariupol will be glad that he identified unexploded Grad rockets on the center’s grounds, which we learn about from the full version of this video (11:10). Garrett, who goes by the nickname “Swampy,” has replied to those claiming he is a “NATO agent”:

In response to the recent allegations of me being an american mercenary paid by western governments. I shall soon release my own statement. For now, here is my response to a certain twitter idiot

Garrett then published a photo of himself upside down:

Published in Press-Stream Russia Update: January 27, 2015 in Publication Russia Update
Mastercard Joins Russian Payments System; Visa Still in Negotiations
Remember last year when it seemed briefly as if Visa and MasterCard were going to help enforce sanctions against Russia? When the US placed Russian banks in the sanctions list, it seemed as if a freezing of transactions by the two major credit card companies were going to go into effect, as we reported back in March 2014,

Visa and MasterCard have frozen transactions on credit cards from a number of Russian banks, including Bank Rossiya, owned by Yury Kovalchuk, described as “Putin’s cashier,” who was included in the White House sanctions’ list announced yesterday in response to the illegal annexation of the Crimea. The Rotenberg brothers are also included in the list, so their SMP Bank is also affected, as are Sobinbank and Investkapitalbank, reports RBC.

But the freeze didn’t last for long; by March 28, some of it was undone:

“At the present time, MasterCard’s operation is fully restored, transactions on Visa cards will begin to go through in several hours as channels of communication are established and the equipment is re-set. Thus, the payment systems have acknowledged the error of their actions regarding SMP Bank, whose cards were blocked after US sanctions were taken regarding the chief share-holders of the bank.”

At the time, Russia said it would make its own payments system and work around Western sanctions. Eventually, such a system was created, called the National System for Payment Cards (NSPK). Now, Visa and Mastercard have joined the Russian NSPK, Yod reports. Vedomosti reports that an agreement hasn’t actually been signed between the credit card companies and NSPK, but on January 23, Visa and NSPK sent out letters to businesses saying that they were cooperating on the transfer of domestic Russian transactions, according to two bankers who spoke to Vedomosti. The Central Bank, NSPK and Visa later confirmed to Vedomosti that such a letter had been sent. By March 31, all international payment systems must turn over to NSPK the processing of transactions of cards inside Russia, or keep on deposit in the Central Bank 25% of their average week’s turnover of card transactions. MasterCard has announced that it has signed an agreement with NSPK, although no other international companies have. Visa, which has 61% of the Russian credit card market has only said that it is “continuing to work with the Central Bank and NSPK in order to come to a decision suitable for all sides in the shortage possible time.” The equipment required for processing the transactions is already being installed, but Visa has not been in a hurry to make a deal, says Vedomosti. First, it would have to change its transfers from VTB to the Central Bank. Second, there will be fees for transactions starting April 1 which will be 2 to 3 times higher than the previous ones. MasterCard’s Russian representative Ilya Ryaby said (translation by The Interpreter):

The structure of our income will not change. On the other hand, the tariffs for the domestic Russian operations have been lowered. The volume of expenses are protected as a commercial secret, but they don’t influence the level of health of our financial model and enable us to consider Russian an important and profitable partner.”

Published in Press-Stream Russia Update: January 27, 2015 in Publication Russia Update
Despite Lack of Foreign Funding, St. Petersburg Court Refuses to Remove Soldiers’ Mothers from ‘Foreign Agents’ List
A St. Petersburg court has rejected an appeal to remove the Soldiers’ Mothers of St. Petersburg from the list of ‘foreign agents,” Nevskiye Novosti reports. The Soldiers’ Mothers, a group that supports the rights of draftees, has been reporting on Russian soldiers killed or missing in action in Ukraine. They have been repeated attempts to get answers from the Russian Defense Ministry, even meeting with military officials, but to no avail. Last summer, conservative politician Vitaly Milonov filed an appeal to the court to have them declared a “foreign agent” under a law passed to restrict organizations with grants from foreign foundations that supposedly engaged in “political activity.”

Translation: the court pronounced lawful the entry of the Soldiers’ mothers into the list of foreign agents.

According to Aleksandr Peredruk, press secretary of the Soldiers’ Mothers, during the session at the October District Court, neither prosecutors or officials from the Justice Ministry could explain how “political activity” was defined.

The Ministry of Justice has said that there is nothing in the law that provides for removing the organization from the list. The Soldiers’ Mothers have pointed out in their defense that at the time they were placed on the list, they had no foreign financing, and do not have foreign grants currently, which were discontinued some years ago.

The Ministry’s original designation of “political activity” related to an appeal in March 2014 to resolve the Ukrainian conflict by peaceful means.

In a related action, the Justice Ministry has requested that the Soldiers’ Mothers be fined up to 300,000 rubles ($4,436) under the law for failure to register. Evidently the amount of the fine is still being determined.

The Soldiers’ Mothers and anti-war activists as well as independent journalists have confirmed at least 260 cases of Russian soldiers killed in Ukraine.

Thirty groups have been branded as “foreign agents” to date under the law passed by President Vladimir Putin in 2012, Human Rights Watch reports, including Memorial Human Rights Center, Lawyers for Constitutional Rights and Freedoms (Jurix) and Public Verdict.

The list can be seen here in Russian on the web site of the Justice Ministry.

In December, we reported on the designation of the Sakharov Center as a “foreign agent.” The label was arbitrarily based on comments made by participants in a panel discussion, and an appeal to end the conflict with Ukraine on humanitarian grounds. Following the example of other groups, the Sakharov Center is hoping to sue the Justice Ministry in order to remove the label, which is based on overbroad interpretation of “political activity.”

By liveblog team of  The interpreter