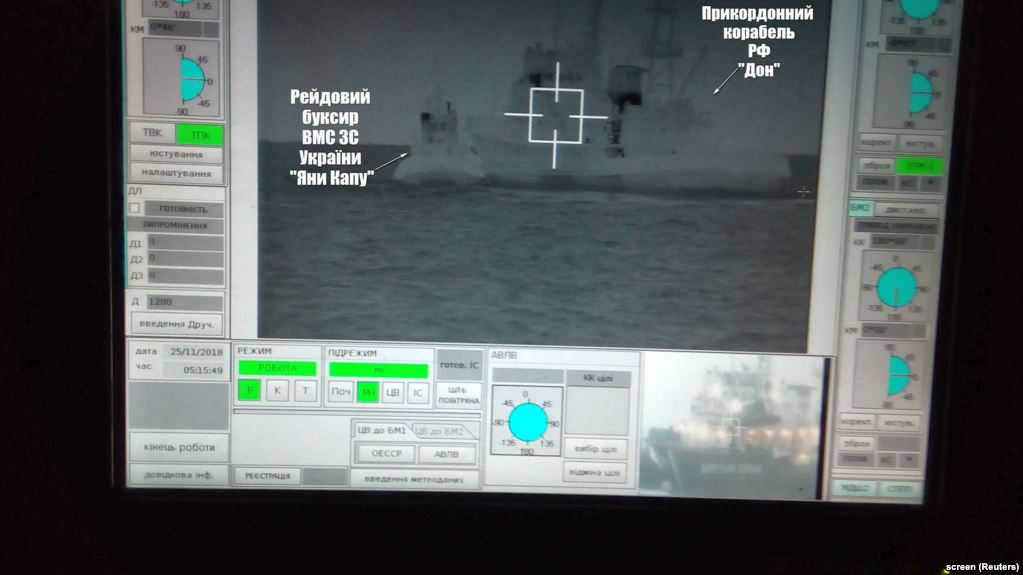 “Unlike Ukraine, we don’t drag our military into adventures and do not shirk international law. And if Ukraine indicated its position, pushing it into international waters, then it shouldn’t make loud statements about ‘ramming, attacks, provocations.’ Moreover, our vessels have moved far ahead in their technological development, we do not use ramming as a tactic.”

On November 25, Russian Coast Guard boats attempted to stop a Ukrainian tugboat as it was on its way to transit the Kerch Strait from the Black Sea into the Azov Sea, between Russia and Russian-occupied Crimea. The incident ended with Russian vessels firing on two Ukrainian naval patrol boats that came to the aid of the tug, and Russian forces capturing all three Ukrainian vessels along with their crews. At least three Ukrainian sailors suffered minor wounds in the attack, although later reports indicate as many as six were wounded.

A bilateral treaty between Russia and Ukraine signed in 2003 and ratified by Russia in 2004 governs the use of the Kerch strait and the Sea of Azov, which in the words of the treaty is considered to be the “internal waters” of both Russia and Ukraine. Article 2 of the agreement guarantees freedom of movement through the straits and in the Sea of Azov to all Russian and Ukrainian commercial and military vessels.

However, after the annexation of the Crimean peninsula by Russia in 2014, which violated several bilateral agreements between the two countries in addition to international law, Western nations have protested increasing Russian control, which some media call “creeping annexation.”

The European Parliament, in October, protested construction of a bridge over the Kerch Strait, and inspections of Ukrainian vessels transiting the strait. The detailed inspections, it said, can delay commercial vessels up to 72 hours, causing “a decrease in cargo flows and tangible financial losses to the Ukrainian economy.” These concerns were raised following the completion of a bridge across the Kerch Strait in May of this year.

In any case, one Ukrainian maritime expert, Andrii Klymenko, who is editor of Black Sea News, believes he has fixed the position of the Ukrainian tug at the center of the incident. According to his analysis, it was in international waters, precisely 12 nautical miles south of the Kerch peninsula’s southern coast

After the incident, Russian media accused Ukraine of staging a “provocation” and violating Russia’s borders. The Russian state-owned media outlet RIA Novosti quoted a State Duma deputy from occupied-Crimea, Dmitry Belik, who accused Ukraine of dragging its military into “adventures” while ignoring international law. This statement is easily debunked. It was Russia’s 2014 military adventure in Crimea that made it possible for Russia to exert more control over the Kerch Strait. Additionally, Russia continues to occupy part of Ukraine’s Donbas region militarily, and that conflict still claims the lives of soldiers on both sides, sometimes daily.

Belik also claimed that because Russia’s naval vessels are so advanced, they would not have to resort to ramming tactics. However, Russia released a video apparently taken from the bridge of one of the Russian Coast Guard vessels. It clearly shows that the Russian ship did not change course as it bears down on the Ukrainian tugboat, apparently deliberately ramming the tugboat. Later, Ukraine’s General Staff released what it said were radio intercepts from the Russian Coast Guard vessels, which if authentic, shows that the Russians deliberately attacked the Ukrainian vessels.

Thread: Ukranian General Staff has published a video of what they say are intercepts of radio talks between Russian coast guard vessels and their onshore command during yesterday’s incident with Ukrainian vessels in the Kerch strait. Key points to followhttps://t.co/h669Nyo76O

Still, the video is enough to prove that however technologically advanced Russia’s maritime patrol craft may be, in this instance the Coast Guard craft used one of the oldest naval techniques in the book.