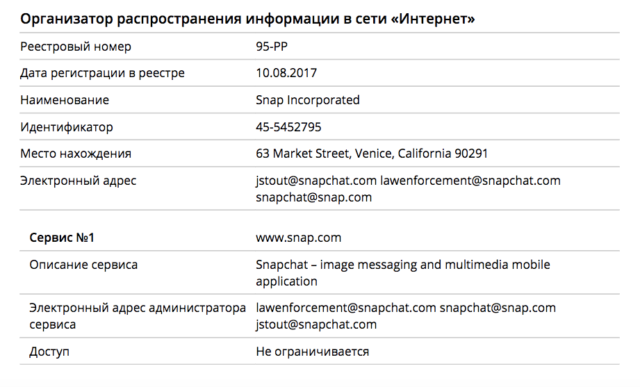 Correction: Snapchat has clarified that Russia’s Internet censor added Snap Inc. to its list of online messengers without its knowledge. Initial reports that the service registered with the Russian government “are not accurate,” a company spokesperson told Meduza. “It appears that they unilaterally registered us.” As of now, Snapchat does not intend to comply with the regulations placed on registered messengers, the company told Gizmodo.

Snap Inc. has become the first major Western Internet company to be registered by Moscow’s federal censor, Roskomnadzor, as an “information distribution organizer.” According to Roskomnadzor, the U.S. company provided its office address, a service description, contact email addresses, and other data. A company spokesperson told Gizmodo that Snapchat did not know this information would be used for this purpose.

In accordance with clauses in Russian anti-terrorist legislation that will take effect in July 2018, “information distribution organizers” will be forced to store records of all calls and text messages exchanged between users for a period of six months, and also store users’ metadata for 12 months, making all information accessible to Russian law enforcement. “Information distribution organizers” will also be required to help Russia’s Federal Security Service decipher any encrypted message sent by their users.

According to the website TJournal, Snapchat is currently the 17th most popular free app in the iOS App Store in Russia, and ranks 38th in Russia’s Google Play Store. Snapchat has a reported 166 million users around the world and is especially popular in the United States.