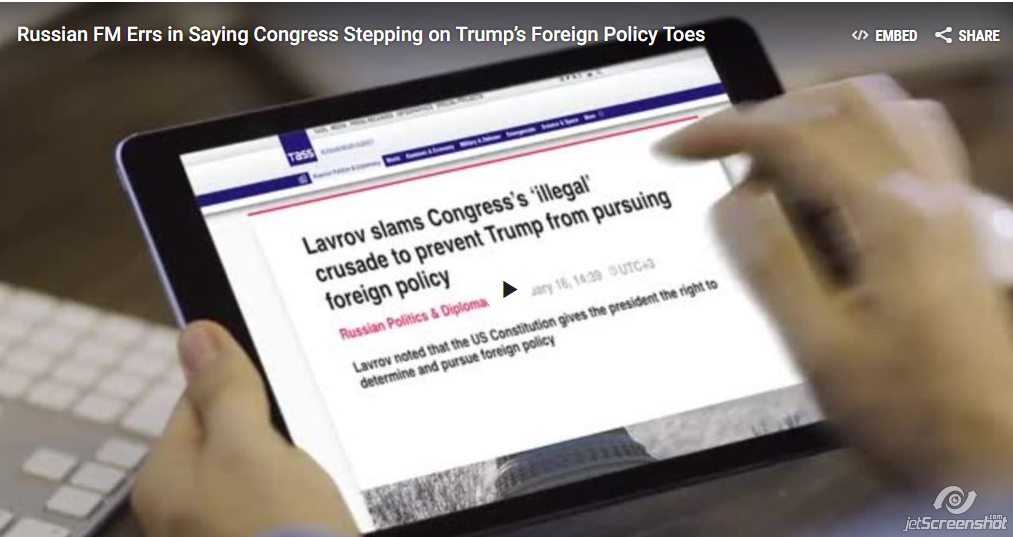 “We do know that [the president’s right to determine and pursue foreign policy] has been coming under attack from the Congress. The issue is covered extensively. However, this does not make these attacks constitutional, and it does not make them less illegal either.”

There has been no congressional overreach in current foreign policy.

Palmer’s question followed a Washington Post report that Trump had taken his interpreter’s notes after a meeting with Putin at the 2017 Group of 20 summit in Hamburg, Germany, allegedly asking the interpreter not to discuss the talks with anyone.

Lavrov said that was difficult to comment on what is going on in the United States in regards to accusations that President Trump is “a Russian agent,” saying the story reflects “a decline in journalistic standards.”

“I cannot believe that journalists in the United States pursue these issues sincerely and professionally,” Lavrov said.

Unprompted, Lavrov then continued to comment on what he described as efforts by the U.S. Congress to undermine the U.S. president’s right to determine and pursue his own foreign policy.

We put the question of whether the U.S. Congress has acted unconstitutionally and unlawfully to prevent President Trump from pursuing his own foreign policy to several constitutional scholars.

Mark Graber, an expert on constitutional law and politics at the University of Maryland’s Carey School of Law, told Polygraph.info that while the U.S. president has distinct foreign policy powers, congressional actions have not been “interfering with the president’s core powers.”

“The president has a core power to be commander in chief. Congress cannot tell him to adopt a military strategy,” Graber said. “The main presidential powers [in foreign policy] deal with negotiating treaties and appointing ambassadors. Nothing congress has done has interfered with that.”

Robert Tsai, a law professor at American University, told Polygraph.info the original design of the U.S. Constitution “envisioned shared responsibility by the president and Congress.”

“[The framers of the constitution] wanted to make it harder, for instance, for the country to get entangled militarily in another country by requiring congressional approval for war,” he said. “And the power of the purse encompasses the ability to help set foreign policy by choosing to fund or defund foreign policy initiatives (for example, when Congress enacted the Boland Amendment to stop [President Ronald] Reagan from helping the Contras in Nicaragua, eventually leading to the Iran/Contra scandal),” Tsai said.

Both Tsai and Graber noted that Congress, rather than overstepping their constitutional bounds in the foreign policy arena, have arguably done the opposite.

Graber said he, in fact, had seen “congressional under-reach”.

Tsai argued that “congressional passivity … has allowed presidents to assert more power,” with some academics and lawyers arguing that the president should be granted “inherent powers to unilaterally control parts of foreign policy.”

Tsai said these defenders of a “unitary executive” theory are attempting to push the role of Commander in Chief “as far as it can go,” adding that “most people think this is a dangerous departure from the text and original design of the U.S. Constitution.”

FM Lavrov notes US Constitution gives president right to set foreign policy & criticizes “illegal” efforts by Congress to affect that policy. Interesting. Had not realized Lavrov was expert on US Constitution & separation of powers. It’s bit different from system in #Russia.

Regarding Trump’s communications with Putin and the ensuing scandal, Amanda Frost, a law professor at American University, said that while the president “has some latitude to negotiate and discuss policy with foreign leaders,” Congress likewise “has the power to exercise oversight over the executive, and can ask for information about these meetings and negotiation.”

And despite Lavrov’s belief in a culture of diplomacy and negotiations at the interstate-level that implies “the observance of decency” and “norms which “exist in each of the communicating states,” Frost said that constitutionally, “oversight is an appropriate role for Congress, and that is what Congress is trying to do with regard to Trump’s discussions with Putin.”

On the afternoon of July 7, 2017, Trump and Putin, accompanied only by Rex Tillerson, Sergei Lavrov and their interpreters, meet for 2 and 1/2 hours. 5/ pic.twitter.com/5tQGy2YUUd

“It is not unusual for presidents and Congress to fight over the degree to which the office of President must disclose info to Congress. That is what is going on here. But there is no clear constitutional line regarding foreign policy that Congress has crossed, and the President does not have unilateral control over all of the nation’s foreign policy, as the quote from the Russian foreign minister suggests,” she said.

Lavrov did not provide more context for his comments. But they were delivered on the same day the U.S. Senate attempted (but ultimately failed) to advance a measure to stop the U.S. Treasury Department from easing sanctions on three Russian companies linked to Oleg Deripaska, whom AP described as being “among two-three oligarchs Putin turns to on a regular basis.”

But as noted by Frost and Graber, Congress has the right to regulate Commerce with foreign nations under Article 1, section 8 of the constitution.

That, said Graber, includes the power to sanction foreign entities.

Benjamin Alter, a J.D. candidate at Yale Law School, wrote that “sanctions are a foreign policy tool uniquely entrusted to Congress by the Constitution.”

“Unlike the other major levers of U.S. foreign policy—diplomacy and military force, over which the Constitution divides control between Congress and the executive — the president has no inherent power to impose sanctions or to refuse to implement congressionally mandated sanctions,” Alter said.

Tsai said that regardless, the president still has “quite a lot of flexibility” to set and shape policy, taking the initiative through the State Department and other institutions “created for that purpose.”

“There are actually many laws that essentially give the president statutory authority to do everything from make exceptions to the admission of travelers and refugees (see the travel ban litigation) or commit troops but satisfy certain protocols (say the War Powers Act),” he said. “Congress is too fractured and transparent to be able to handle initiatives that require secrecy or dispatch, so everyday handling of most foreign affairs matters must be done by a president and his advisors.”

From a constitutional perspective, examples of congressional overreach during the Trump presidency in the realm of foreign policy have not been forthcoming.

But it should be noted that former officials from the Obama and George W. Bush administrations have warned that subpoenaing Trump’s interpreter to testify before Congress would be, in the words of David Mortlock, director of international economic affairs at the White House National Security Council (NSC) under Obama, “a bridge too far.”

“They’re at the center of diplomatic relationships and it raises concerns about whether you can truly have diplomatic communications,” he said.

Trump has gone to extraordinary lengths to hide details of talks with Putin, such as taking interpreter’s notes, U.S. officials say https://t.co/TxIarXrLFX

Whether such a move would rise to the level of unlawfulness or unconstitutionality is up for debate.

But thus far, no such step has been taken.