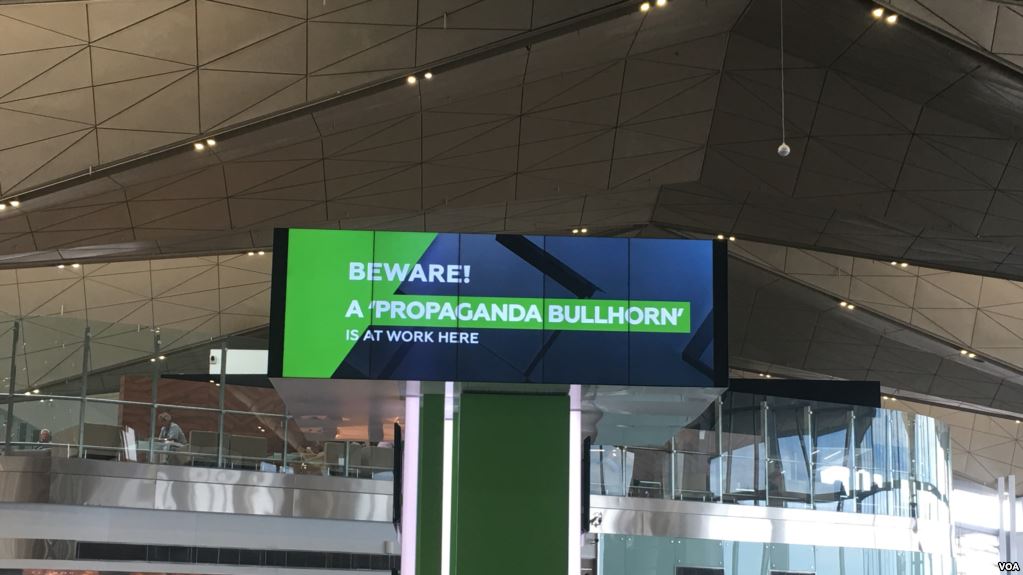 “The president of France slanders us because we slander him.”… “The longer you watch, the more upset Hillary Clinton becomes.”

RT, formerly known as Russia Today, functions as “just one brick in a pyramid, at the top of which sits the Russian government,” as Polygraph.info reported in November 2017. The global information organization, which operates in a number of countries and languages on the Web and TV, has begun displaying “political” ads on electronic billboards deployed in busy Russian airports

The message board at St. Petersburg’s Pulkovo International Airport has a sophisticated and sleek appearance, and sits atop a phone charging booth in the terminal.

The RT message boards present something of fact-checking challenge, given that some of the messages seem to be tongue-in-cheek admissions of RT’s role in Russian propaganda.

We chose the two that seemed to be aimed directly at two Western governments’ conclusions that Russia influenced their elections:

The message on the American election is in English:

In the 2016 presidential election campaign, U.S. intelligence agencies concluded the Russian government injected itself into the campaign by releasing emails hacked from Democratic Party nominee Hillary Clinton’s campaign. In January 2017, the Director of National Intelligence presented an unclassified version of a report that concluded President Putin “ordered an influence campaign… to undermine public faith” in the U.S. election and “harm her (Clinton’s) electability and potential presidency.”

Other messages seen in the St. Petersburg airport, in Russian and some in English:

The online American news organization BuzzFeed concluded in July that the RT airport electronic billboards by “a propaganda wing for the Russian government…(are) meant to troll Americans and mock allegations that the Kremlin interfered in last year’s elections.”

RT’s apparent attempt at humor created a bit of a stir on Twitter in July, and perhaps that is the goal of the ad campaign, which an RT spokeswoman told BuzzFeed would continue until next year. BuzzFeed reported the ads are also displayed at airports in Moscow and Sochi.

In an article in July, RT called its own “satirical messages” a “provocative ad campaign” and displayed a number of tweets from Democrats who each called themself a “DNC hack survivor.” The RT article also quoted tweets from “a deluge of trolling.”

As a DNC hack survivor I have a lot of thoughts about my layover in Moscow, but the most appalling part was @RT_com‘s official advertising 😑 pic.twitter.com/NWRCVERsVu

​BuzzFeed, which is not a fact check site, reached the same conclusion as Polygraph.info, pointing out that U.S. intelligence agencies concluded that Russian election interference “did in fact happen.”