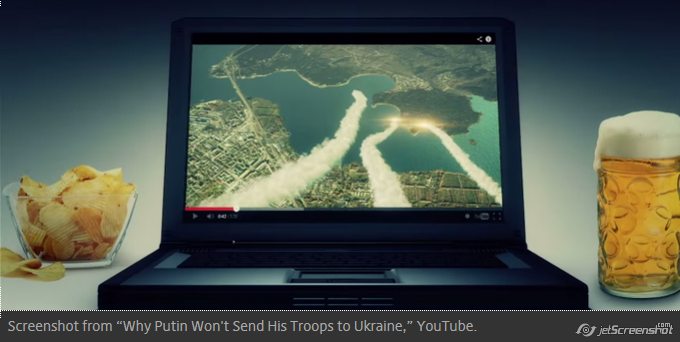 With nearly 5 million views in less than two weeks, the YouTube video I’m a Russian Occupant is a bonafide sensation. Just under three minutes long and packed full of twirling, burning, zooming images, the movie is an uncompromising defense of Russian imperialism, and boasts impressive production values, as well as subtitles in ten languages.

Because the video looks like it was made by a major computer game company, there’s been wide speculation that the people behind it are funded by or somehow connected to the Kremlin. On March 4, an infamous viral video studio, My Duck’s Vision, even took credit for the movie, saying the Russian government paid for it. (This studio is known for similar-looking videos, such as a short film in 2011 that claimed McDonald’s restaurants are in fact an American network of secret bunkers built to withstand a Russian nuclear strike.)

The YouTube channel responsible for posting I’m a Russian Occupant belongs to a man who calls himself Evgeny Zhurov. He told RuNet Echo that any claims about the Kremlin orchestrating the video’s creation are an “absolute lie.” He insists he made the video singlehandedly in his spare time, going out of pocket to hire a professional voice-over artist. “These people want to destroy the ‘myth’ about a guy who works ‘for an idea,’” Zhurov said. “They want to make all my work look like it was part of some government contract.”

If Evgeny Zhurov doesn’t really exist, and his videos are all the product of a Kremlin conspiracy to feign grassroots activism, Zhurov has certainly gone to curious lengths to be transparent about his methods. In a video published in September 2014, he spends more than ten minutes explaining in excruciating detail how he used Element 3D’s “camera mapping” software to render flat photographs in three dimensions. The video even has English-language subtitles.

Whether or not he’s telling the truth, Zhurov’s videos on YouTube are impressive, and I’m a Russian Occupant is only his most recent addition. There are another nine clips, one of which has more than 3 million views.

Since the first movies began appearing in May 2014, Zhurov’s ideological message seems to have evolved with events in eastern Ukraine. In June 2014, he posted a video titled Why Putin Won’t Send His Troops to Ukraine, where he chides Russian “couch-potato generals” for calling on the Kremlin to deploy soldiers in the Donbas. (The narrator in the video says this would play into a US trap and trigger World War III.) Three months later, however, the next video, titled Why America Needs a Big War in Europe, shifts tones, saying “sooner or later Russia will send troops to Ukraine to prevent the deaths of millions.”

Asked what changed, Zhurov said the lack of progress in “Ukraine’s civil war” now makes Russian troops inevitable. “I’m one of these ‘couch-potato generals,’ too,” he confessed, saying his videos are based on readings of “different geopolitical experts.” Zhurov says two of his biggest influences are Nikolai Starikov, one of the leaders of the Anti-Maidan movement, and Sergey Glazyev, an adviser to Vladimir Putin and one of the first Russian officials sanctioned by the United States following the annexation of Crimea.

Following the success of I’m a Russian Occupant, at least three different groups have released videos “correcting” Zhurov’s pro-imperialist telling of Russian history. The most viewed response comes from the Information Forces of Ukraine, the so-called iArmy. Though the iArmy is government-sponsored, its video has a decidedly lower production value.

The responses to Zhurov’s YouTube hit don’t seem to faze him terribly. He’s even reposted all three videos on his group’s VKontakte page, announcing that his “opponents” appear to be “shitting bricks.”