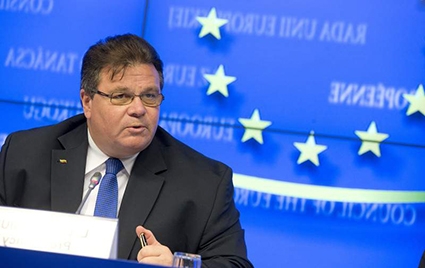 Linas Linkevicius, the Foreign Minister of Lithuania, has published an article on euobserver.com concerning Russia’s informational propaganda in Europe and the possible threats.

The publication starts with a revelation highlighting a certain national day during which “in one EU country which he [the minister] won’t name, Russian uniforms marched alongside others in the celebration.”

“It was the same uniform which is currently taking part in aggression against Ukraine. Did it look good? Was it picked up by European media as being a bit strange? No. You never heard of it,” Linkevicius says. He cites there is a tendency to consider propaganda an exotic bug which only affects the lives of “people far away – in Ukraine, Georgia, Russia.”

“But the carefully-packaged lies are finding their ways to audiences all over Europe. It is the result of a systematic and heavily-funded campaign, and saying that the West is immune because we have a plethora of media outlets isn’t true” – the article reads.

Linkevicius believes large, Russian-speaking portions of the EU audience, whether in the Baltic States or London, get the Kremlin’s view first and foremost. “It’s the result of language limitations or old media habits. In this sphere, media plurality means plural TV channels all manipulated by one (Russian) authority.”

Gazprom, the Russian energy giant, is also discussed in the publication in which Linkevicius says: “We had the courage to confront Gazprom’s monopoly in Europe. Now it’s time to confront Russia’s ‘infoprom’, which has weaponized information in the same way the Kremlin weaponized energy supplies.”

The Foreign Minister calls on some urgent measures to be taken by the European Union. “We need to start thinking not just what we can do for them – referring to non-EU eastern European states- but also what can we do to protect ourselves?”

Linkevicius believes there is more to it than allocating money from foreign relations budgets. “It’s equally important to ensure the transparency of funding and ownership of media outlets which operate in the EU.” According to the article, the ‘Kremlin mouthpieces’ know how to register in [our] cities. “They put on a “Made in the EU” label, then they begin to quietly incite hatred, hoping no one will question what they’re doing because of the holy cow of free speech.”

Recently, Salome Samadashvili, former Georgian Ambassador to the European Union, through the Brussels-based Martens Centre, published a study entitled Muzzling the Bear, referring to Russia’s information propaganda and Hybrid Warfare in the region, in general. The author implies that the Russian side, through state-backed information sources, disseminates propaganda in Georgia and Europe, working against the states and their sovereignty.

How can Georgia cope with this problem? What actions are needed?

It has long been obvious for the Georgian Government that Russian information propaganda robustly endeavors to undermine Georgian sovereignty and mislead society through creating a negative icon of the EU and NATO in the country.

It has been believed that setting certain restraints for those Russian state-affiliated media means operating in Georgia would not mean any censorship, as the Lithuanian Foreign Minister remarks above; but the opposite, Georgian experts, think tanks or non-governmental organizations support the notion that it is essential for the government to limit Russian media in the country to protect its sovereignty and political stability.