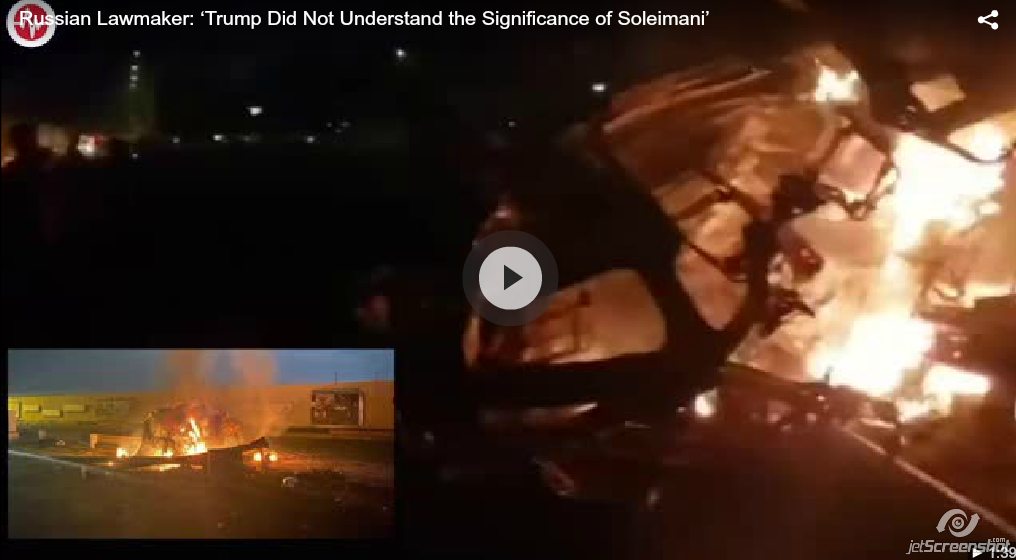 Elena Panina
Russian lawmaker
“In this situation, we cannot exclude that the American military and intelligence agencies took advantage of the story of the disturbances near the U.S. Embassy in Iraq in their corporate interests and simply framed Donald Trump, who did not fully understand the significance of the figure of Qassem Soleimani, who has the status of a national hero in Iran.”
Source: RIA.ru, Jan. 3, 2020 |
False
Knowledge of Soleimani played a crucial role in Trump’s presidential campaign

The killing of Qassem Soleimani, commander of the elite Quds Force of Iran’s Revolutionary Guard Corps (IRGC), in a U.S. airstrike, sparked controversy worldwide, with some praising the move as necessary and others warning it could backfire.

Domestically, the targeted killing in Iraq raised concerns about the U.S. president’s legal authority to make such decisions.

The Pentagon said in a statement: “General Soleimani was actively developing plans to attack American diplomats and service members in Iraq and throughout the region.” In an interview with CNN, U.S. Secretary of State Mike Pompeo said the strike had disrupted an “imminent” attack. Soleimani, he said, was “actively plotting in the region to take actions — a big action, as he described it — that would have put dozens, if not hundreds, of American lives at risk.”

Soleimani was on a U.N. travel sanctions list and had been sanctioned by the U.S. since 2005 as a supporter of terrorism.

Russia’s Foreign Ministry condemned the U.S. strike as an “adventurous” move that “will lead to increased tension throughout the region.” Expressing “sincere condolences to the Iranian people,” the ministry said Soleimani “loyally served the cause of protecting Iran’s national interests.”

The Russian state-owned news agency RIA Novosti quoted Elena Panina, a member of the foreign affairs committee of the State Duma (the lower house of Russia’s parliament), as suggesting that the President Donald Trump may have been ignorant of Soleimani’s significance in Iran when ordering the strike to kill him. She suggested that Trump was tricked.

“In this situation, we cannot exclude that the American military and intelligence agencies took advantage of the story of the disturbances near the U.S. Embassy in Iraq in their corporate interests and simply framed Donald Trump, who did not fully understand the significance of the figure of Qassem Soleimani, who has the status of a national hero in Iran.”

Panina claimed Soleimani’s killing was in revenge for a series of “humiliating” blows the U.S. suffered at the hands of the Iranian military. In particular, she cited what she called the “successful simulation of the destruction” of the USS Essex, a U.S. Navy amphibious assault ship, in the Persian Gulf while the head of the U.S. Central Command, U.S. Gen. Joseph Votel, was on board.

That incident took place in October 2018, when two Iranian small patrol boats approached the U.S. ship during an exercise.

Contrary to Panina’s claim, there was nothing humiliating for the U.S. Navy in that encounter. In fact, Gen. Votel was quoted as responding to the situation with humor, and the U.S. Navy command said the Iranian boats acted safely and professionally.

In addition, what Panina described as “disturbances near the U.S. Embassy in Iraq” were in reality a two-day standoff that began with Iranian-backed militiamen and their supporters attacking the embassy compound, wrecking a reception area, setting several fires and writing graffiti as they protested U.S. airstrikes on an Iran-backed militia group.

The embassy attack prompted the State Department to evacuate diplomatic personnel, the Pentagon to deploy additional troops to Iraq and Trump to lash out at Iran, saying: “They (Iran) will pay a big price. This is not a warning. It is a threat.”

Panina’s claim that, at the time he ordered the strike, Trump was possibly ignorant of Soleimani’s significance, is false.

According to U.S. media reports, Trump’s decision to allow the U.S. military to kill Soleimani was well-informed and based on weeks of consultations.

Additionally, the issue of Soleimani had already caused major criticism of Trump’s candidacy during his run for the White House.

In September 2015, then-candidate Trump was unable to respond to a question from radio host Hugh Hewitt about Soleimani.

At the time, Trump’s ignorance of Soleimani made the then-candidate a target of criticism both by his political rivals and the press.

Soleimani had a decades-long record as a major U.S. security threat, and there were repeated calls for his elimination.

Pompeo told CNN that before taking the move to kill Soleimani, Trump had “shown enormous restraint,” while intelligence had been collected on “Soleimani’s travels in the region and the work that he was doing to put Americans further at risk.”

“The risk of doing nothing was enormous,” Pompeo said.

President Trump said on Friday that he authorized a precision strike against Soleimani because he was plotting “imminent and sinister attacks” on Americans.