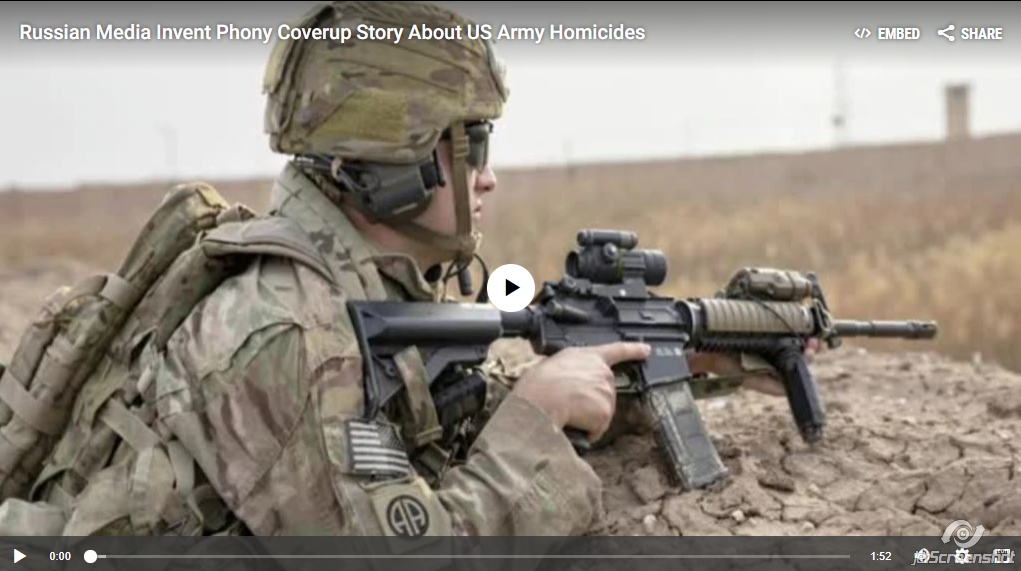 RIA Novosti
Russian state news outlet
“Journalists are diligently helping the army command to hush up the scandal. None of them accuses the base commanders or the country’s leadership, [none of them] generalizes, demands immediate jailing, no one shouts that it’s high time to abolish this terrible contract army, in which ‘our children are dying.’”
Source: RIA Novosti, December 16, 2020
FALSE

On December 16, Russia’s RIA Novosti state news agency published an article headline “American Dedovshchina,” the latter word being the Russian term for the violent hazing that has been a feature of the Russian conscript military since the late Soviet period.

Although there has been no such systemic abuse of soldiers in the modern U.S. military, the article’s author attempts to use sexual assault cases and other violent criminal acts — mainly connected to the U.S. Army’s Fort Hood base, located in Killeen, Texas — to draw a parallel between the U.S. and Russian armies. Moreover, the author accuses the American media of covering up wrongdoing for military commanders.

“Journalists are diligently helping the army command to hush up the scandal,” Viktoriya Nikiforova writes.

“None of them accuses the base commanders or the country’s leadership, [none of them] generalizes, demands immediate jailing, no one shouts that it’s high time to abolish this terrible contract army, in which our children are dying.”

“’There is literally no clear reason for this string of deaths and violence,’ the flagship of independent democratic journalism, the legendary New York Times, reports on a blue eye (a Russian colloquialism meaning “naively”). Journalists in the line of duty, what can I say?”

The claims that American journalists helped cover for the U.S. Army and that the U.S. military has an equivalent to Russia’s dedovshchina are false.

Located in Texas, Fort Hood is one of the U.S. Army’s largest bases, with some 36,500 troops. The base drew scrutiny in recent years after to a string of violent deaths. The New York Times reported in September that since 2016, more Fort Hood soldiers had died from homicide than in combat.

One case involved the death of 20-year-old Specialist Vanessa Guillen, who disappeared from Fort Hood in April 2020 and whose dismembered remains were found in June. Guillen was killed by a fellow enlisted soldier, Aaron David Robinson, who took his own life when authorities attempted to apprehend him outside Fort Hood.

The Guillen case shined a light on the Army’s failure to address the issue of sexual harassment. Guillen had reportedly complained to her family that Robinson had sexually harassed her and that she was afraid to report it.

“As you know, the FBI and the DOJ (Department of Justice) are now involved,” the president told the Guillen family and their attorney, Natalie Khawam.

“We got them involved. And the people at Fort Hood, where it took place, are very much involved. We didn’t want to have this swept under the rug, which could happen.”

At the same time, U.S. Secretary of the Army Robert McCarthy promised a full, independent review. This was carried out, and on December 9 it was reported that 14 senior leaders and enlisted personnel at Fort Hood were either dismissed or suspended.

“I have determined that the issues at Fort Hood are directly related to leadership failures, leaders drive culture and are responsible for everything a unit does or does not happen to do,” McCarthy said.

The event also spurred an open discussion about sexual harassment and assault in the military as well as the failure to properly address it. Those who shared their stories on social media used the hashtag #IAMVANESSAGUILLEN, and in September, a bipartisan bill called the “I Am Vanessa Guillen Act” was introduced in Congress with the aim of reforming the military’s procedures for reporting sexual harassment and assault.

Nikiforova recounts Guillen’s case but cites no examples of how the U.S. media purportedly covered up for the post’s commanders. In fact, the opposite was true: The Guillen case was widely reported — not only by major media outlets, but also by military focused media such as the Army Times, Stars & Stripes, and Task & Purpose.

On December 10, the Army Times published an article about the conclusions of the independent committee formed to investigate the command culture and misconduct at Fort Hood. It was headlined: “Simply sacking Fort Hood leaders doesn’t solve its problems, investigators say.”

In August, Stars & Stripes published an article headlined: “Why Is Fort Hood the Army’s Most Crime-Ridden Post?”

Nikiforova provides no evidence to back her claims of a cover-up, save for the quote from the New York Times, which she translates into Russian as: ” У этой череды смертей и насилия нет буквально ни одной внятной причины.” The English translation for that is: “There is literally no clear cause for this string of deaths and violence.” Yet the actual New York Times quote, from a September 9 story, reads: “No clear single reason explains the rash of deaths and violence.”

The Times story cites the several people on the possible causes of Fort Hood’s problems, from local law enforcement officials to army personnel and soldiers’ family members. The article details several of homicides that occurred at the base; the Times story, rather than covering up, clearly sheds light on the Army’s multiple failings.

On December 9, a week before the RIA Novosti article was published, the New York Times published a new article on the Vanessa Guillen case, headlined: “What We Know About the Death of Vanessa Guillen.”

“Activists had expressed their anger at the lack of answers and action from the military when Specialist Guillen first disappeared and called for systematic changes in how the military handles reports of sexual harassment and assault,” it stated.

“In December, the Army found ‘major flaws’ in the culture at Fort Hood and disciplined more than a dozen officials.”

Nikiforova’s remark on the U.S. media not calling to do away with the all-volunteer military (she uses the term ‘contract’) appears to refer to demands activists have made for years to do away with compulsory military service in Russia.

In fact, since as far back as 1996, the Russian government has repeatedly promised to eliminate conscription in favor of an all-volunteer military. A major goal of Russia’s 2008 military reforms was to reduce the number of conscripts. While this met with limited success, the Russian military has greatly increased the share of volunteer personnel.

Russia has made progress in fighting dedovshchina hazing, and the Defense Ministry’s own media outlet, TV Zvezda, reported back in 2014 that Russia’s general staff triumphantly proclaimed that the practice had “disappeared.”

That claim seems to have been premature. The independent English-language Moscow Times reported earlier this year that violent hazing continues in the Russian Army and detailed several high-profile cases that led to suicide and murder. In one of those cases, a conscript shot and killed eight fellow soldiers in 2019 in what he said was retaliation for bullying and a rape threat.