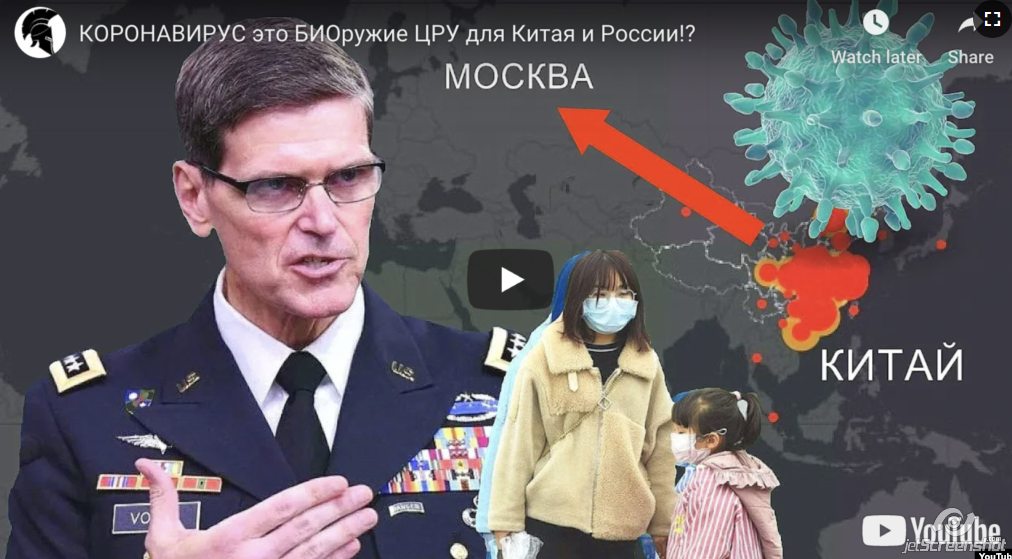 Igor Nikulin
Russian biochemistry and military expert
“China is surrounded by American military labs, and there is a U.S. consulate in Wuhan, the staff of which could have delivered the dangerous cargo to the PRC.”
Source: RIA Novosti, Jan. 27, 2020
Misleading
Russian domestic media spin false conspiracies blaming the United States for the coronavirus outbreak.

On Jan. 28 the World Health Organization (WHO) reported that the coronavirus 2019-nCoV had spread from China to about 11 countries, had killed 80 people and had infected 2,798 worldwide.

The day before, stories propagated in a large number of Russian domestic news outlets began suggesting the United States might be behind the outbreak.

“The Chinese believe the coronavirus is created by the Americans,” the popular Komsomolskaya Pravda reported, citing as proof that the virus was “genetically shaped in the American laboratories,” the claim that “all the infected are Asians!” and there are “no Europeans.”

The virus has been confirmed in the U.S., Australia, Canada and France, where reports of three cases incited fear of a contagion in European capitals, according to reports by the Guardian and Bloomberg.

The U.S. Centers for Disease Control and Prevention (CDC), as of Jan. 27 also had confirmed five cases of 2019-nCoV in the United States with 73 pending diagnosis.

“The expert saw signs of the American bioterrorism in spreading of the coronavirus,” Moskovsky Komsomelets newspaper reported.

The story featured Igor Nikulin, a Russian biochemical and military expert and former adviser to the United Nations commission on biological and chemical weapons.

Nikulin was the same scientist who claimed the United States, not Russia, was behind the March 2018 poisoning, using a military grade nerve agent, of the ex-KGB spy Sergey Skripal and his daughter in the U.K.

(Amid Moscow’s denials, a U.K. investigation determined that Russian military intelligence was behind the Skirpal poisoning.)

Russia’s oldest state-owned news agency, RIA Novosti, reported, “The spread of coronavirus might have been a sabotage, the expert [Nikulin] thinks.”

The RIA Novosti report, citing Nikulin, speculated that U.S. diplomatic staff may have “delivered” the dangerous cargo from the “American lab” to Wuhan.

Leonid Savin, featured as a foreign policy expert at the shadowy Strategic Culture Foundation, speculated that the Bill and Melinda Gates Foundation hay have helped finance creation of the “coronavirus bioweapon.”

Vladimir Zhirinovsky, the leader of the Liberal Democratic Party and a popular veteran politician, told Moscow radio that Americans were “surely” behind the outbreak. He suggested pharmacists were gaining billions while the U.S. military reaped an “opportunity to test” weaponizing the virus.

The Russian media reports appeared to be part of a domestic disinformation campaign.

The coronavirus conspiracies did not appear in the Kremlin’s foreign language news agencies.

Anti-U.S. conspiracies are common in Russia. They include a thoroughly refuted story about the Central Public Health Reference Laboratory, known as the “Lugar lab,” in Georgia, the former Soviet republic.

Russian sources claimed the Pentagon was using the lab to create and test biological weapons, causing hundreds of deaths in the local population.

That conspiracy was proven completely fabricated by multiple investigations and fact checks, including by Polygraph.info. In reality, the U.S. Centers for Disease Control and the drug company Gilead were working a joint project with Georgian health officials to combat hepatitis C using antiviral medicines.

Other discredited conspiracy theories circulated by Russian media claimed the U.S. created the Ebola virus as a biological weapon and tried to infect Latin American leaders with a deadly cancer virus.