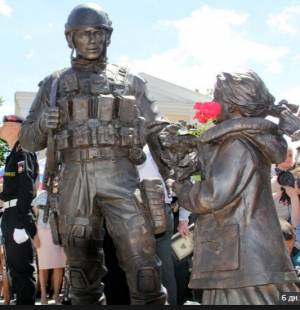 (right photo: Reshat Ametov, with two of his three children)

A monument to the victims of the Deportation of the Crimean Tatars is to appear in Crimea, sculpted by the same artist responsible for the monument to the Russian soldiers used by Moscow to invade and annex Crimea, Halya Coynash wrote for Human Rights in Ukraine.

Perhaps the model presented by Russian sculptor Salavat Shcherbakov really was the best entry in the competition held, but the cynicism behind both the first monument, and now this move, referred to by blogger Vadim Dovnar as “the latest spit in the face to Crimean Tatars”, is quite breath-taking.

The monument to the Russian soldiers without insignia who seized control of government buildings and other strategic sites in Crimea from Feb 27, 2014 was unveiled on June 11, 2016 in the centre of Simferopol.  It is to the so-called “polite people” – the description of the soldiers that Moscow has assiduously pushed, and shows a soldier being presented with flowers by a little girl.  The Russian propaganda site Sputnik International * truly excels itself in asserting that “This monument is built in honour of the marine, airborne and military intelligence personnel, who took part in the peacekeeping mission during the Crimea reunification process with Russia in March, 2014.”

This reconstructed view of reality is not shared by the international community.  This is presumably why the hyperlink which Sputnik itself provides to its ‘reunification process’ is to a report on a Die Linke German deputy from Quakenbrück whose claim to fame is having – in June 2016 – become “the first German politician to publicly advocate recognizing Crimea as a part of Russia.”

The monument’s positioning is also of interest given the sculptor’s new propaganda task.  Until Russia forcibly annexed Crimea, the victims of the 1944 Deportation of the entire Crimean Tatar people were honoured each year on May 18 by tens of thousands of Crimean Tatars and others in the very centre of Simferopol.

Since annexation, all remembrance gatherings have been effectively banned, and those trying to take part in the traditional events have been detained, and some even prosecuted.

Yet now it has fallen upon the idea of a ‘monument’ for propaganda purposes, and this is to be created by the same hack who produced its monument to invaders.

RIA Novosti reported on June 15 that Shcherbakov’s sculpture “will represent the pages in the life of one of the families of Crimean Tatars and will be erected in a memorial near Bakhchysarai to be completed by 2019.

Yet again there is an upbeat moment focusing on children.  The sculptural composition will be concluded by two children sailing ships, standing on a little island which is to symbolize their return to their homeland in Crimea.

Among those whom Russia has banned from their homeland is Mustafa Dzhemiliev, the veteran Crimean Tatar national leader who was just 6 months old when he and his people were first sent into exile.

Around 100 thousand Crimeans are now believed to have fled after Russia’s annexation, with many of them fearing persecution or violence from the armed paramilitaries used as backup for those “polite” soldiers with their machine guns.

The three young children of Reshat Ametov are growing up without their father after he was abducted while standing in peaceful protest outside parliament on March 3, 2014.  His tortured and mutilated body was found the day before Russia’s pseudo ‘referendum’ on annexation.  There are a minimum of 16 people, most Crimean Tatars who have been abducted since Russia’s invasion, including prominent Crimean Tatar activist and delegate to the World Congress of Crimean Tatars Ervin Ibragimov, less than a month ago.

There are also 32 children, mostly Crimean Tatar, whose fathers have been arrested on insane ‘terrorism’ charges and are facing very long sentences over alleged involvement in Hizb ut-Tahrir, an organization which is legal in Ukraine and most countries.  The lack of any proof even of involvement, let alone of ‘terrorism’, is unlikely to deter Russian courts from providing the huge sentences demanded.

The first of such trials is in fact taking place in the same court that last August sentenced renowned Crimean filmmaker Oleg Sentsov and civic activist Oleksandr Kolchenko to 20 and 10 year sentences, respectively.  Sentsov’s young son and daughter have also not seen their father for over 2 years.

When Crimean Tatar journalist Lilia Budzhurova first published an article saying that “These are now our children” and calling for an initiative group to be formed to help them, she received a formal warning of possible criminal prosecution for ‘extremism’.

These propaganda stunts would be offensive under any circumstances.  Given the terror the occupation regime is unleashing, the use of children for their pathos is revoltingly cynical.

*  If the Sputnik International article does not open, it can be found on Google under “Crimean Authorities Honor Russian Troops With ’Polite People’ Monument“.  The photo of Shcherbakov above is from RIA Novosti