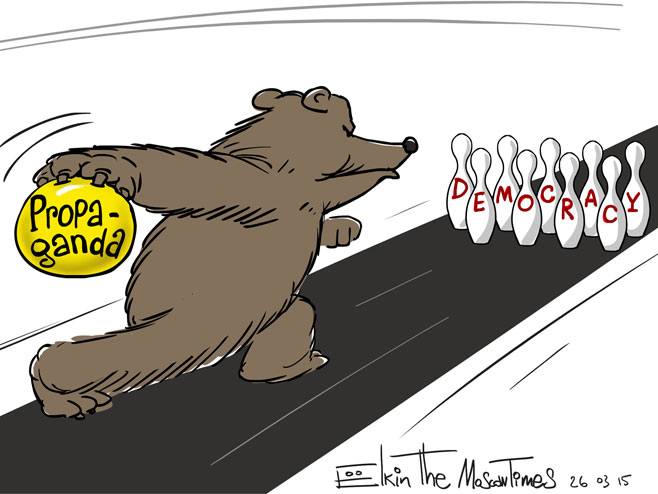 It is becoming clear that certain authoritarian models of government are capable of matching and, in some respects, even exceeding the accomplishments of their democratic counterparts. Whether Russia, with its dependence on energy exports and otherwise undiversified economy, should be counted among them is debatable, but there is one area in which the Russian state has so far demonstrated a clear mastery over its Western opponents: its propaganda or, to use the public relations term, its messaging.

But impressive as the information component of Russia’s current “hybrid war” over Ukraine has been, its success arguably owes less to its ingenuity than to ingrained flaws in Western democratic culture for which there is no simple solution.

The effectiveness of Russia’s spin is difficult to deny; in addition to the almost 90 percent of Russians who support their president and, albeit passively, his expansionist campaign, a large part of the Western public, especially in Europe, remains convinced that Russia bears little or no responsibility for the war in Ukraine.

Ironically, Russian messaging has worked by exploiting vulnerabilities in precisely those mechanisms of self-criticism and skepticism which are considered so essential to the functioning of a democratic society. The modern Western culture of self-doubt has proved particularly susceptible to manipulation in a 21st-century confrontation that strongly recalls its Cold War origins.

Four assumptions popular in contemporary Western democratic discourse have been co-opted by Russian messaging in the present crisis. The first is that all sides in a conflict are equally guilty. Never far beneath the surface, Europe’s suspicion of the leader of the Western alliance, the United States, has been reinvigorated by successive scandals over the war in Iraq, torture and eavesdropping. Everyone has committed crimes — so the thinking goes — so how can the West possibly reproach Russia?

Likewise, in this confused moral landscape, the “illegality” of the Ukrainian revolution is blithely juxtaposed with the illegality of Russia’s annexation of Crimea, while the enormous differences in nature, scale and motive between the subjects under comparison go unmentioned.

The second assumption is that there are “two sides to every story.” The desire to consult multiple sources and the unwillingness to accept just one narrative are part of a healthy critical outlook, but the system breaks down when one side is a fabrication. There is no middle ground, for example, between the claim that the Russian army is fighting in Ukraine and the claim that it is not.

But Russian messaging counts on the fact that a certain percentage of Westerners, aware of past distortions by their governments, will inevitably give credence to Russian denials, however implausible they may be. Once again, the feeling that the United States has betrayed the world’s trust in recent years has contributed to this situation.

The third assumption is that in a confrontation between the West and a non-Western entity, the West is invariably the aggressor. Half a century of political and military interventions in the Middle East, Africa, Latin America and Asia has left a not altogether unjustified impression of Western impunity, an idea embraced by many in the European Left.

The final assumption is that general conflict in Europe is an impossibility. Peace has reigned for so long in the major countries of Europe that its interruption seems as inconceivable as an extraterrestrial invasion, as World War II begins to fade from memory. Russian messaging has had no difficulty persuading people that calls for military preparedness are nothing more than militarism and fear-mongering.

To be fair, the effectiveness of Russia’s propaganda, both at home and abroad, has declined as the visible gap between word and deed in Ukraine has widened. But the ease with which disinformation has piggybacked on deeply held dogmas of the Western liberal order should serve as a reminder that even the most stable democracies are more fragile and vulnerable than they appear.

A powerful antidote to corruption and misrule, the practice of speaking truth to power is part of what makes the West strong and sets it apart from authoritarian states. Paradoxically, however, this culture of self-criticism risks becoming just another substitute for independent thought in a self-satisfied Western consumer society that assumes its place in the world is unassailable.

History has a way of playing tricks on those who think it has ended.

author: Andrew Kornbluth is a doctoral student at the University of California at Berkeley.