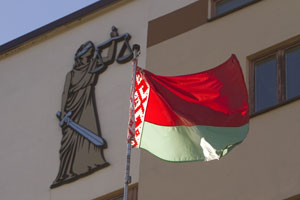 Moscow has unleashed a powerful wave of “black propaganda” against Belarus, often using Belarusians who now live in the Russian Federation to do it. But that effort, ostensibly designed to counter Western and Ukrainian propaganda, is alienating Belarusians and making cooperation between the two countries in the union state more difficult.

That is the judgment of Vladimir Abtsugov, a Belarusian writer who wants the union state to succeed, on a phenomenon few have focused on up to now as offered in the current issue of the influential Russian military-political journal Voyenno-politicheskoye obozreniye.

Russia and Belarus, he begins, are allies and members of a union state. But that doesn’t mean that they do not have differences and even disputes, especially since “the Belarusian state is at the point of contact between Eastern and Western civilizations” and thus is the site of a permanent ideological struggle.

That is “an objective reality” which no one should ignore, and “since the moment of the acquisition by our country of independence,” Abtsugov argues, “the intensity of the conflict between East and West has steadily grown.”

Most of the propaganda in this conflict comes from the West which always has had the goal of “weakening Russia” and seeks to find “the weak links” among the countries around Russia’s periphery which are friendly to Moscow. And some of it comes from Ukraine, especially in the period since the Maidan.

Moscow and Minsk should be able to solve their differences like friends with talks, “but to the enormous regret [of Belarus] … periodically uses dirty technologies taken from the West’s conduct of information wars,” something that should be “categorically impermissible” and that is in the present case counterproductive.

Russian outlets find this easy to do, not only because Moscow has “an incomparably large apparatus of political propaganda,” but also because Russians and Russian speakers in Belarus rely on Russian media for much of their news, information and opinion. Tragically, Moscow has used these advantages in a destructive way by conducting itself like “a bull in a china shop.”

“One must not say that such actions are the official position of Russia,” especially since the Russian government and the government media generally act quite correctly. “But a certain part of the Russian media belongs to private corporations which allows the latter to be used for all sorts of ‘delicate’ affairs.”

“These [Russian] corporations support political analysts, economists, experts and journalists who specialize in the Belarusian direction, people like Andrey Suzdaltsev, Pavel Sheremet, Nikolay Radov, and Yury Baranchik and uses them like a battering ram in propaganda wars.”

Baranchik is a good example of this, Abtsugov says. Born in Belarus, he recently moved to Russia and has earned his keep there by “regularly pouring dirt on his country and its leadership,” something he has proved ready and willing to do.  Recently, his employers have asked him to go further and he has even suggested that Belarusians do not exist as a people.

He thus requires that Belarusians forget all their history except that when they have been tied to Russia, a demand that is inherently offensive to the more than 80 percent of the Belarusian population who identify as Belarusians. And it invites responses from them that many Russians would not like.

“For example,” Abtsugov says, “one could assert that the Russian Empire was Russian only by name because Peter I was the first and last emperor who was purely Russian by nationality, and all the rest were in one or another degree Germans. Therefore, tsarist Russia never was an independent state but rather was under concealed foreign rule.”

What can this lead to?  The obvious answer is anger and dissatisfaction with Russia among Belarusians.  While most want good relations with Russia, “ever more often can one hear out of the mouths of ordinary Belarusians [negative statements about Moscow] that one would not have heard earlier.”

That is not just the result of Western or Ukrainian propaganda, he says; it is the result of the work of Russian outlets like the REX news agency, the Foundation for Strategic Culture, “Geopolitika,” “Vzglyad,” KM.ru, Regnum “and many others.” One can only hope that Russia will recognize what these organizations are doing.

“Unfortunately,” Abtsugov says, “the Russian propaganda apparatus is directed at promoting anger” rather than promoting friendship. The latter requires “completely different approaches. National and religious feelings are a very delicate instrument, and one must not allow those with less than clean hands to play on them.”

By Paul Goble, The Interpreter