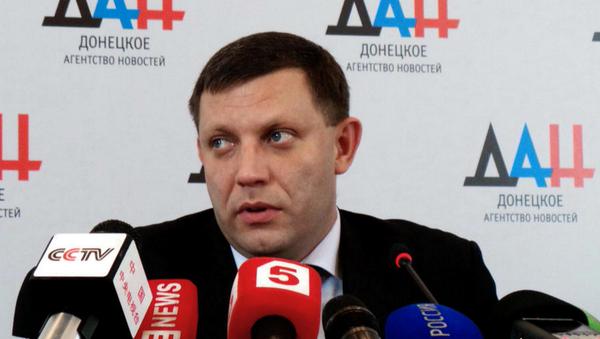 Terrorist speakers and pro-Russian media in Ukraine are notorious for rapidly shifting statements in the wake of disasters they cause. As details of the MH17 crash became known, terrorist propaganda sites and Kremlin news agencies quickly pulled down boasts of shutting down a Ukrainian military cargo plane. Right after the bus massacre at Volnovakha hit the news, a terrorist news group on the Russian social network Vkontakte promptly deleted a post claiming destruction of a Ukrainian checkpoint. Later there were several more twists to the story, unpicked by independent investigator website Bellingcat. The horrific strike at Mariupol on January 24 was no different.

“Locals in Mariupol call the shelling a Ukrainian army provocation”.

These reports came in even as independent investigators and later OSCE observers accused DNR terrorists of the massacre that took 30 lives and left many more wounded.

Later, the story took a turn to the bizzare. Alexander Zakharchenko, the leader of “DNR” terrorists, announcing an “assault on Mariupol” during a mourning ceremony for those killed in another bus massacre in Donetsk on the evening of the tragedy, where two days earlier at least 13 civilian lives were taken by a strike inside the city, apparently by “DNR” forces. Here’s what his address sounded like (with subtitles):

On the evening of After honoring the memory of the dead, Zakharchenko announces the beginning of the assault on Mariupol and, to the cheering of the crowd, expresses hope for advancement of the “DNR” troops in closing the Debaltseve pocket. Cheering for killed civilians in Mariupol at a ceremony dedicated to honoring killed civilians in Donetsk – a chilling example of the result of the brainwashing workings of Russian propaganda. Apparently after finding out about the carnage left in the wake of the terrorist attack, Zakharchenko denied his own statement:

Instead the terrorist leader claimed his fighters were suppressing Ukrainian positions outside the city, which is partially confirmed by the intercept published by the Security Service of Ukraine, which suggest shelling of a Ukrainian checkpoint outside the city gone horribly awry.

Other sources also shifted their narrative as the scale of loss oflife became apparent. For instance, a pro-Russian military analysis website militarymaps.info was caught editing their conflict map in the wake of the tragedy:

MilitaryCraps map BEFORE world got ouraged about their attack on Mariupol with 29 civilians killed pic.twitter.com/6sgndV9Em6 by @sterion75

This is how the Russian attack on civilians in Mariupol today looks like on MilitaryCraps: pic.twitter.com/lwWyZiBZQ4

These attempts to cover up atrocities are too sloppy to succeed and may even serve as circumstantial evidence to put the blame on the side rapidly shifting their testimony. In an age defined by instant news spread and quick independent investigation, they are not fooling anyone except the victims of Russian propaganda.