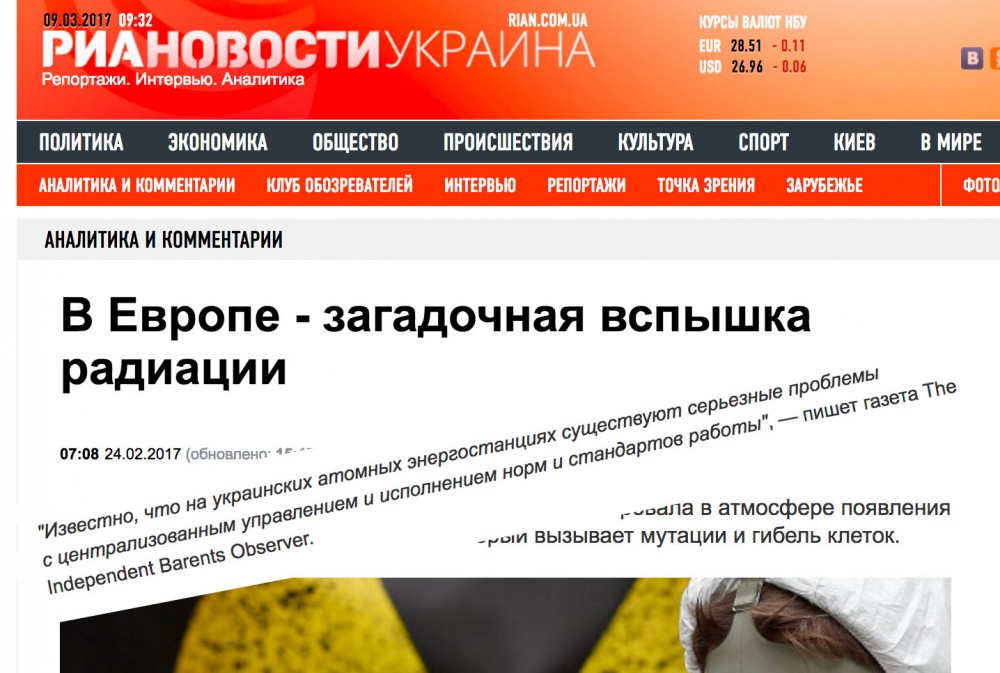 No, Ria Novosti, we have never pointed the finger of blame at Ukraine as the source of a January radiation leak.

The Barents Observer last month reported on the tiny trace of radioactive iodine-131 measured across Europe. First noticed in Norway’s Pasvik valley, the isotope was soon found in Rovaniemi in Finland and later on in Poland, Germany, the Czech Republic, France and Spain.

The incident was widely covered by media-outlets in Europe, the Middle East and Russia.

«It is known that at the Ukrainian nuclear power plants there are serious problems with centralized management and execution of the norms and standards of work,» RIA Novosti and Komsomolskaya Pravda are citing the Independent Barents Observer.

RIA Novosti does not provide any evidence at all to support the claim that the iodine-131 radiation is coming from Ukraine. No other European publication has reported that the leak originated in Ukraine.

The «blame-on-Ukraine» news spread to other Russian media outlets, among them Operativnaya Linia, Anna News and Forum.msk.ru.

The fake Barents Observer quote was first published in Komsomolskaya Pravda, in an article mixing up different sources, but claiming, without providing evidents, that the contaminated cloud came from Ukraine.

Barents Observer’s article, however, is not pointing the finger of blame at any installation or country, except quoting Astrid Liland, Head of section for emergency preparedness at the Norwegian Radiation Protection Authority, who said it could “come from Eastern Europe.”

It was the site StopFake.org that first collected the overview of Russian articles wrongfully spreading the information that Ukraine was to blame for the radiation leak.