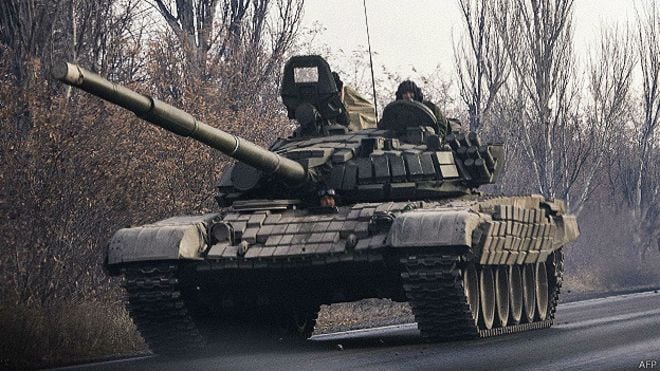 U.S. Gen. Philip Breedlove expressed concern that the border between the former Soviet allies was now “completely wide open,” allowing Moscow to potentially bolster rebels in eastern Ukraine who are skirmishing with government troops despite a cease-fire.

NATO confirmed his remarks to NBC News, and U.S. defense and military officials at both the Pentagon and European Command also acknowledged the movement of Russian tanks and artillery into Ukraine. “What worries me the most,” Breedlove told reporters in Bulgaria, was that the Russia-Ukraine border was “completely porous.” “Forces, money, support, supplies, weapons are flowing back and forth across this border completely at will,” Breedlove said. “That is not a good situation.”

Defense and military officials told NBC News that the Russians do not constitute an “invasion force,” but instead appear positioned to bolster the defenses of pro-Russian separatists who have suffered some losses to Ukrainian military forces. “It appears they may be digging in to support the separatists, not mount a challenge,” according to a senior U.S. official.

The Russians have built a “permanently garrisoned force” on the Russian side of the border with Ukraine, including seven combat brigades with some 7,000 ground troops and weaponry, officials say. They also confirmed that the Russians have positioned nuclear-capable Frogfoot fighter bombers at an airbase in Crimea, seized by Russian forces in March. The officials stress that there is no evidence the Russians have or intend to store nuclear weapons at Crimea and point out that all Russian bombers are technically “nuclear capable.” “Crimea is lost, the Russians own it,” according to one senior military official who said it’s clear Moscow is in the process of “militarizing the place.”