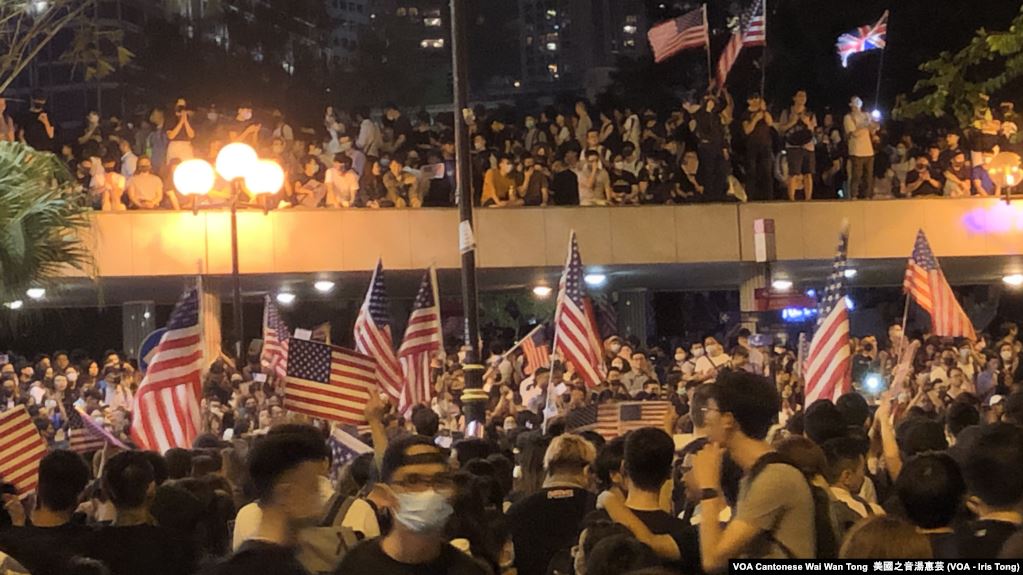 RIAFAN.ru
Russian news agency
“Then everyone watched a video prepared by the organizers of the action. The video encouraged [them] not to stop there, but to continue the fight. Various white American uncles and aunts performed, and, against touching background music, spoke about the support of the ‘people of Hong Kong.’ In the frame appeared different faces from among American politicians and officials. All of them talked about how you must not stop, you need to protest as much as possible, and that only by force is it possible to satisfy the demands of the opposition.”
Source: RIAFAN.ru, Nov. 29, 2019
False
The report was falsified, from its quotes to its numbers.

On Nov. 29, the Federal News Agency – which is part of the Kremlin-backed Internet Research Agency, aka the “troll farm” — posted a news article on its website, RIAFAN.ru, headlined “Hong Kong’s opposition listened to instructions from the United States right in the city’s business center.” The agency said its correspondent reported “from the scene,” and posted multiple photographs and an edited video clip embedded in the text.

While the rally cited by RIAFAN.ru indeed took place, the agency’s account was loaded with false information and fake quotes.

What the ‘troll farm’ said happened

During the rally that took place at Hong Kong’s Edinburgh Place on Nov. 28 – Thanksgiving Day in the United States — protesters celebrated the fact that U.S. President Donald Trump had signed the Hong Kong Human Rights and Democracy Act of 2019 into law.

While reporting that rally participants chanted “USA!”, RIAFAN.ru did not mention that the main reason they had gathered was to celebrate the new U.S. law supporting their democratic aspirations.

Whatever the case, photographs from the rally posted by Twitter users during the event suggested attendance was much higher than the numbers reported by RIAFAN.ru

The statue erected on the staircase, described by RIAFAN.ru in racist terms, is difficult to identify from the low-resolution photo embedded in the news agency’s report.

However, the statue of an African American man standing behind a rostrum with what appears to be an open Bible in his right hand as part of an exhibit symbolizing American democracy appears to depict Martin Luther King Jr. delivering his iconic “I Have a Dream” speech. Online reverse image searches also support this conclusion.

“This is fake news,” Hong Kong opposition activist Joshua Wang told Polygraph.info in response to a request for comment on the RIAFAN.ru report. “I have never said ‘Glory to Hong Kong! Glory to the Heroes of Hong Kong! Hate to police! Disobedience to police! Free Hong Kong!’ during the assembly,” Wang said, referring to a live feed video on his Facebook page confirming that RIAFAN.ru fabricated the quote it attributed to him.

In its own video report, RIAFAN.ru included parts of what it described as a video clip in which “various white American uncles and aunts” tried convince the protesters that “only by force” they can achieve their goals.

In its edited video report, RIAFAN showed fragments of videos apparently shot from the screen with three persons speaking English, with subtitles in Russian but no identification of the speakers.

Using reverse image search tools Polygraph.info was able to identify the people on the video as (left to right):

The original video recordings of all three expressing support for Hong Kong’s protesters are available online.

Blackburn posted the video on her official Twitter feed.

Devin confirmed that he addressed the Thanksgiving Rally in Hong Kong via video in a Facebook post the same day, geotagged at the site of the rally.

The original video of Devin’s address is also available on YouTube.

Yue posted on Twitter a link to a video of an interview he gave to the BBC’s Chinese service on October 18 expressing support for the protesters in Hong Kong.

Fragments of that interview without the BBC logo also appear in a YouTube video titled “Solomon Yue Video for 11.28 Assembly.”

In their videos, Blackburn, Devin and Yue each expressed support for the protesters in Hong Kong in their fight for human rights and democracy, and criticized China’s government. Nowhere in these videos, including the fragments used by RIAFAN.ru, did any of them call for use of violent force in Hong Kong.