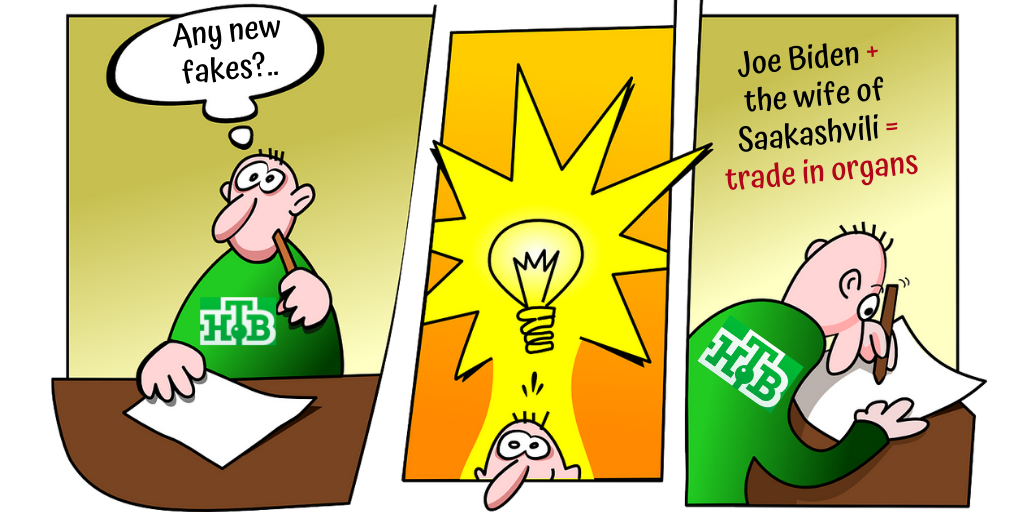 The wife of Georgia’s ex-president Mikheil Saakashvili supervises trade in organs taken from wounded Ukrainian soldiers. And former US Vice President Joe Biden has been covering up the crime.

This message reached millions of Russian homes on 20 May thanks to the state-controlled TV channel NTV.

And it was not a comedy show.

The broadcast also made repeated claims that Saakashvili’s family and centrally placed Ukrainian politicians are controlled by the CIA.

NTV’s programme is part of a series of documentaries appearing under the headline “Based on a true story,” which, in its own words, “combines popular TV genres: series, investigations, celebrity and political intrigues” and shows “exclusive footage obtained by the NTV team, as well as scenes that have never been published before”.

It is typical of the Pro-Kremlin media to work in this borderline of journalism, sometimes dressing disinformation up as entertainment, using elements of tabloid journalism, conspiracy theories and, when necessary, to drown serious issues in sarcasm.

NTV’s production about Mr Saakashvili works in accordance with this method: The attempts to dehumanise and discredit the Kremlin’s opponents are presented in a style so sensationalist that it almost becomes the kind of propaganda some label “hahaganda”.

A look into the EUvsDisinfo data base of pro-Kremlin disinformation shows that NTV’s claims are part of a tendency to tie Mr Saakashvili to similar conspiracy theories, often with links to the US.

For example, one case alleges that John McCain pushed Saakashvili to start the war with Russia. In another case, audiences have been told that the shooting during the Euromaidan in Kyiv was organised by Mr Saakashvili with the help of the US secret services. And supporters of Mr Saakashvili have been claimed to be under the control of George Soros and American diplomats.

The accusations about alleged trade with human organs are also not new, but have previously appeared in the pro-Kremlin disinformation narrative about Ukraine, as described by Georgia’s Myth Detector website.

NTV is owned by Gazprom Media, a subsidiary of Gazprom, the large Russian state-controlled supplier of gas to the international market. In this way, Russian authorities control NTV, even if NTV is not a formal state media outlet.