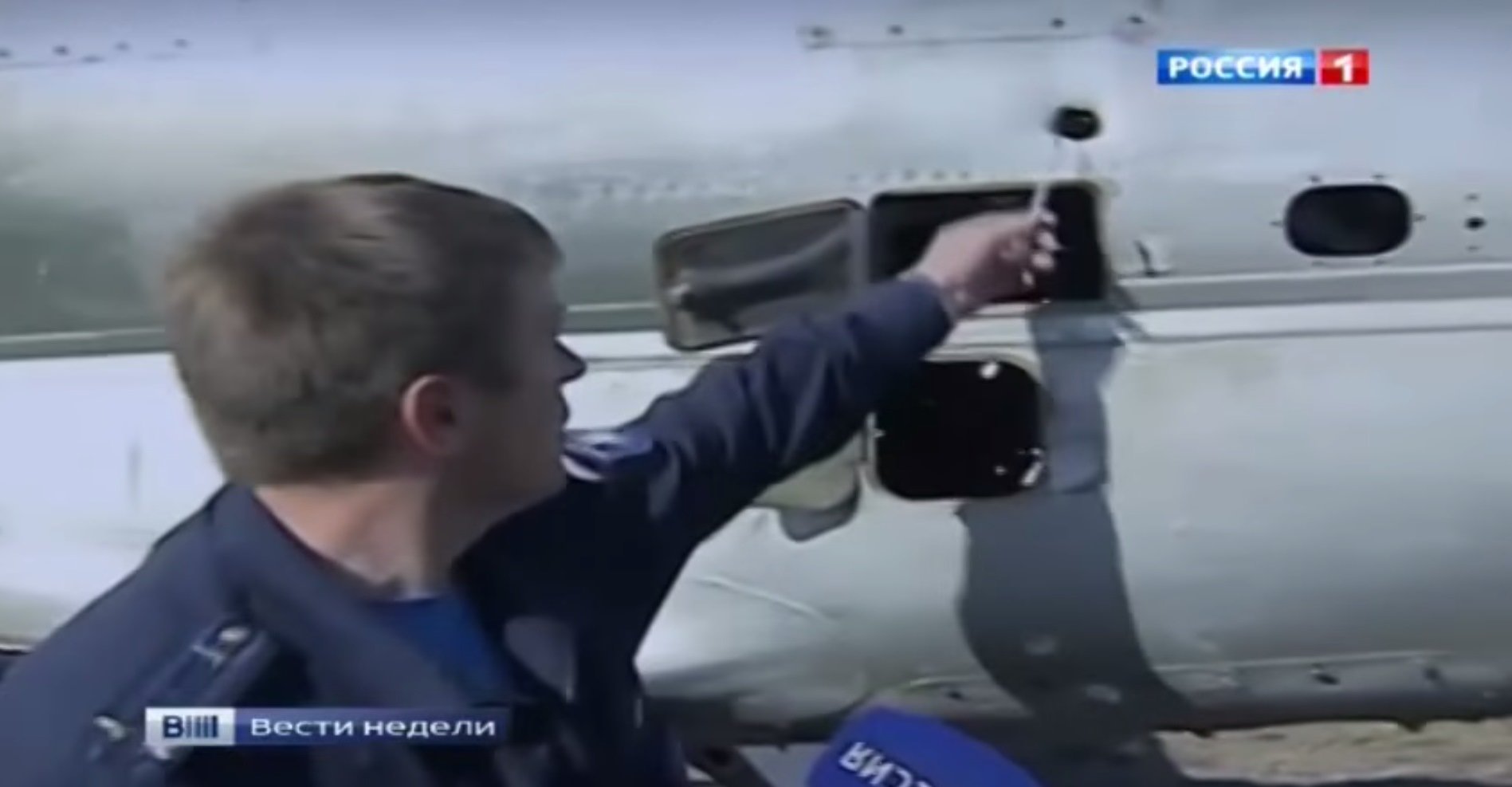 Anyone who has been following the debate over the downing of MH17 will know one point of contention is which weapon was used to down MH17. On one side you have people who say it was mostly likely a missile launched by a Buk missile launcher, and on the other people claiming it was cannon fire from a jet. Generally the former claim is used to link the separatists to the downing of MH17, while the latter is used to claim the Ukrainian government was responsible.

Presented by Arkady Mamontov, a Russian journalist who last year linked the Chelyabinsk Meteorite incident to gay activism, it promises to explore the downing of MH17 in depth, and in the preview they demonstrate the lengths they’ve gone to in their investigation by arranging to have a live fire exercise to test out cannon fire on aircraft.

First we’re shown the entry holes created by the cannon fire, several holes of a consistent size and shape. Next, the other side of the aircraft, where along with the larger exit holes we also have much smaller holes of various shapes and sizes. So here we have a pattern of damage established, consistently shaped and sized entry holes and the same shaped exit holes surrounded by smaller exit holes of various shapes and sizes. There’s even a comparison shot of the MH17 wreckage to demonstrate how closely the damage matches. However, there’s been many photographs of the wreckage of MH17 posted online, and some of these show clear examples of the initial damage done to MH17 when it was first hit. This panel, from above and behind the flight deck windows (discussed here at length), shows clear examples of entry holes coming from outside the aircraft. It’s clear that unlike the entry holes in the Russian video, these holes are a wide variety of shapes and sizes. This image shows the full panel with many more points of penetration. It’s also worth noting that many of the 30mm cannon scenarios involve the attacking aircraft coming from below, generally from behind, yet the above images clearly show the impacts coming from above the flight deck.

Another example of MH17 entry holes comes from ANNA News, a Russian language news channel embedded with separatists in Ukraine. In this video they are given a tour of the wreckage by separatists, where they are shown part of the aircraft it isclaimed was hit by cannon fire. Here’s a image from the video showing the entry holes.

We get a sense of the size of these holes in this image. This is what’s claimed to be entry holes from cannon fire, but as we can see, compared to the Russian TV piece on the damage done to MH17 there’s a significant size difference.

It’s been possible to ascertain that the panel in the ANNA News video was positioned above the flight desk windows, on the starboard side of the aircraft (details here), so, as with the earlier example, this shows cannon fire from below and/or behind the aircraft could not have caused this damage.