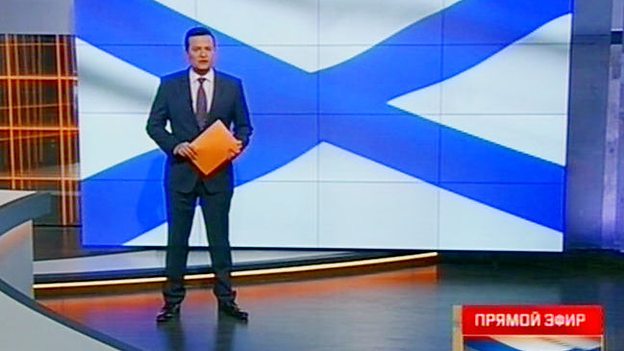 Russian TV has a plethora of programmes dedicated to the activity of the Russian military. Over the past year and a half, however, they all have been studiously silent about one of the Russian army’s biggest operations in recent times: the amassing of troops near the border with Ukraine. Any reporting on their manoeuvres, to say nothing about the deployment of Russian regulars inside Ukraine, is taboo.

What they talk about

Military reporting features prominently on Russian TV and has increased in recent years.

Not only are there specialist military programmes on all of the country’s main TV channels, but military news is often aired on mainstream bulletins.

In addition, the Defence Ministry has its own channel, Zvezda, which fills its schedules with a mixture of war films, patriotic entertainment shows, news bulletins and a flagship military show, called “I Serve Russia”.

In line with the general trend in Russia’s state-owned media, Zvezda TV has responded to the conflict in east Ukraine with a dramatic rise in political content, which is invariably hostile to Kiev.

In particular, “I Serve Russia” has gone from being a programme purely about military affairs to yet another outlet for anti-Ukraine propaganda.

Soon after the conflict began in the spring of 2014, “I Serve Russia” began to devote five of its 30 minutes to a single report attacking Ukraine and supporting the Russian-backed rebels. Now, though, the show has expanded to an hour and has a 20-minute block dedicated to Ukraine. Anti-US, anti-NATO and anti-Western sentiment are thrown in for good measure. This has been the pattern since September 2014.

The language of Zvezda’s reports about Ukraine borrows heavily from the lexicon of the 1941-45 “Great Patriotic War” against Nazi Germany, and includes terms such as “fascists”, “Nazis” and even “blitzkrieg”. If anything, it is even more inflammatory than that used on Russia’s main state-controlled TV channels.

At the same time, Zvezda’s purely military reporting has suffered.

One crucial subject “I Serve Russia” has been completely silent about is the mass deployment of troops on the border with Ukraine.

What they don’t talk about

In a briefing paper in March 2015, Igor Sutyagin, a Russia scholar at the London-based Royal United Services Institute (RUSI), estimated that up to 90,000 Russian troops were stationed on the Ukrainian border and in Crimea in the first phase of what he described as the “operation against Ukraine” in the spring of 2014.

Sutyagin also said that more than 100 combat and combat-support units have had to donate manpower on a rotation basis to maintain what he estimates to be a force of more than 40,000 troops massed near the border with Ukraine.

What is more, the “presence of large numbers of Russian troops on Ukrainian sovereign territory has become a permanent feature of the [Ukraine] conflict”, Sutyagin said.

The Russian army’s involvement in the fighting in east Ukraine has been corroborated by numerous pieces of evidence, including social media posts by soldiers, the burial of dead servicemen and the capture of others.

Yet an analysis of “I Serve Russia” broadcasts reveals that in relation to the five Russian regions which have a land border with Ukraine (Bryansk, Kursk, Belgorod, Voronezh and Rostov), there was complete silence on any military activity between May 2014 and March 2015.

Back in March 2014, the programme reported on air force activity in Kursk Region, at the end of what was billed as a snap exercise in west, north and central Russia. According to the Kremlin, the drills, which involved 150,000 service personnel (“one in six”, according to “I Serve Russia”), had nothing to do with Ukraine.

Two months later, in May 2014, the show mentioned an apparent movement of forces in Rostov Region following an announcement on a drawdown of troops near the border with Ukraine.

The next time this area of Russia was mentioned on “I Serve Russia” was in March 2015, when there was a relatively trivial report about Defence Minister Sergey Shoygu’s visit to Rostov Region and Crimea.

Meanwhile, viewers of “I Serve Russia” and Russian TV’s other military reports have been getting puff-pieces about the army’s new equipment (especially nuclear weapons) or competitions like the “Tank Biathlon” or the “Aviadarts” fly-offs – anywhere but in regions near Ukraine.