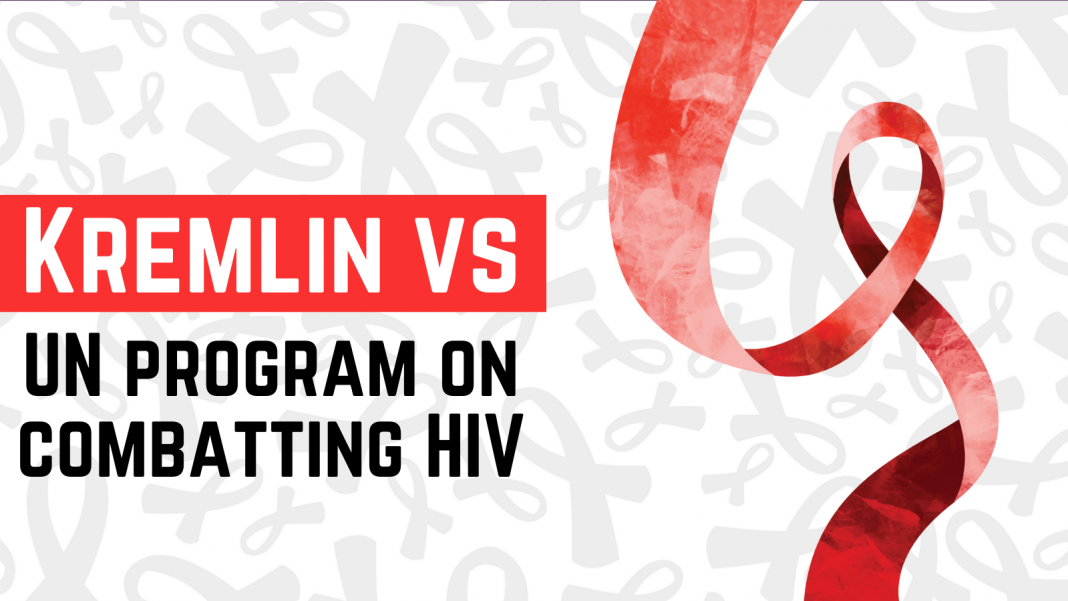 In a recent article, EuvsDisinfo showed how Kremlin disinformation on the coronavirus pandemic impedes Russia’s attempts to combat the disease. For the Kremlin, creating an image of success is more important than actually administrating vaccines and handling the challenge. Now, the authorities is prepared to risk the sick and vulnerable, as the country leadership refuses to participate in a global UN campaign against HIV.

The UN program is an ambitious program, set up by eleven UN bodies, identifying core reasons for the spread of HIV. Overcoming poverty and equality is seen as paramount in achieving the goal: zero infections worldwide. The UN report writes:

There is an urgent need to scale up HIV prevention services, especially in the Russian Federation, and there is a large gap between HIV testing and treatment initiation./—/ High levels of physical, sexual and emotional violence towards women and girls are also significant barriers to HIV services. Major efforts are needed to reverse current trends.

The Russian Ministry of Foreign Affairs explains the Kremlin’s refusal to cooperate in the UN program:

We note that this document, intended to lead the world community in the battle against HIV/AIDS for the upcoming five years, lacks measures for prophylactic work with youth, for healing drug dependency, for support of a healthy lifestyle and family values.

Deaths from the Virus

According to official Russian statistics, as per 31 December 2020, 1,104,768, or 0.7 per cent of all Russian citizens are registered as bearers of HIV. 72,023 new cases of HIV were detected in 2020 and 32,208 HIV infected died during the year. This can be compared to the number of Russians, dying from COVID-19 in 2020 – again, according to official numbers: 57,019. The statistics are insecure and the two diseases are, of course, not comparable, but the numbers demonstrate nevertheless the scope of the issue with HIV in Russia.

Statistics from Europe are dramatically different: Spain, for instance, estimates less than 1,000 deaths from HIV in 2019; Germany – under 500. Globally, Eastern Europe and Central Asia are one of only three areas where the HIV situation is worsening.

The EUvsDisinfo database on disinformation contains a large number of cases, connected to the alleged moral decay of the western society. The trope about Russian moral superiority is a core narrative in the Kremlin disinformation: words like “human rights”, “tolerance” and “respect” are used as derogatory terms. The West is under the control of Satan:

In the logic of the disinformation outlets, “The West” represents moral decay and degradation. Russia, on the other hand, represents lofty ideals without any connection to Russian realities. The pro-Kremlin disinformation system has persistently described the HIV as a “hoax” or as a virus, created by foreign aggressors. The pro-Kremlin media has done nearly nothing to debunk conspiracy theories around HIV and insists in viewing the spread of the virus as a an issue of moral decay and family values. The UN project suggests hands-on, effective measures to handle a global menace. Russia’s Foreign Ministry interprets this as yet another attempt to interfere in Russia’s internal affairs:

We do not agree with a wideing mandate of UNAIDS beyond the limits of its activities in the medical and social spheres.

The UN project identifies violence against girls and women as a factor, impeding the battle against the HIV. Combating domestic violence is challenging the Kremlin’s vision of family values; domestic violence was even de-criminalised in Russia in 2016. The Kremlin is ready to sacrifice tens of thousands in order to pretend moral superiority.