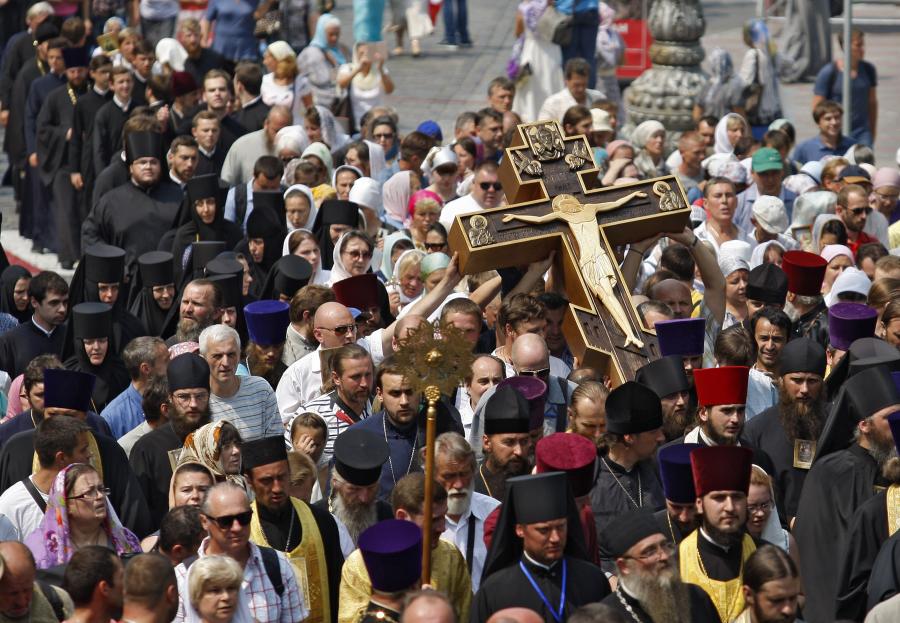 Recently Ukraine has witness a well-advertised and long planned “peace march” taking part across the country, climaxing on 27th July in Kyiv upon the celebrations of the baptism of Volodymir.  The number of participants, though in their thousands, perhaps not doing justice to the amount of preparatory media exposure it received.

The march was not without controversy with many in Ukraine perceiving the march of the Ukrainian Orthodox Church of the Moscow Patriarchy to be nothing short of a Kremlin influence operation within the country, whether planned or co-opted.

The Kremlin has a habit of getting Ukraine seriously wrong, twice erroneously betting upon Viktor Yanukovych, the spectacular failure of Novorossiya, and the war in the Donbas has now turned into a war of exhaustion rather than providing swift leverage to actually change the orientation of Kyiv or, more importantly, the will and determination of the Ukrainian people to withstand The Kremlin.

The march also raises prickly issues for His All Holiness Bartholomew 1, the Archbishop of Constantinople, New Rome and Ecumenical Patriarch, with increased and intensified lobbying from the Ukrainian political and religious classes to remove the Kyiv church’s subordination to the Moscow Patriarch and grant it autocephaly to the Orthodox Church.  Should Kyiv eventually be successful, not only would a Kyiv Patriarchy radically reduce an instrument of influence for Moscow, there will also be many ungodly issues relating to property and earthly riches within the Ukrainian territory.

Kremlin attempts to play upon shared (or not shared) culture, history, language and values within Ukraine (and beyond) has not gathered significant traction among the Ukrainian constituency.  Ukrainians are well aware of the Kremlin use, or perhaps better stated misuse, of Kremlin “soft power”, notwithstanding its blunt and bloody use of “hard power” at an ever-growing cost in Ukrainian lives reinforcing a rightful sense of national violation.

“Soft power” is a multifaceted and complex issue, but at its most basic, it can perhaps be summarized through the Western lens as the ability to influence (and co-opt) through the appeal of an attractive outcome for all actors with agency involved.

It is possible to debate the real desire of the Ukrainian constituency to become part of the EU or NATO beyond the rhetoric of the current elite which naturally sees both as form of security blanket.  Nevertheless there is certainly a desire within the Ukrainian constituency to see the rule of law, rather than rule by law, a move to a free market economy rather than remaining a captured oligarchy state, and something approaching genuine democracy with effective and public serving institutions of State.

The Kremlin is aware of its lack of attractiveness and therefore its version “soft power” is simply anything short of military action.  It works not by way of Russian attractiveness or its appeal, but by way bribery and coercion, the goals of which may range from control, to influence, to disruption, to the dismantling of institutions, or polluting the public consciousness within whichever State it targets – including within Russia itself.

Aside from the most recent perception among much of the Ukrainian constituency that identifies the march as a Kremlin influence operation, as opposed to the consistent easily, if wearily, refuted propaganda noise, there are other influence operation signals becoming more frequent.  Some are clearly planned, yet others obviously opportunist occurring within capitols that the Kremlin seeks to influence.

The much propagandised story of Lisa F, which was a swiftly adopted Kremlin influence operation by virtue of opportunism, would seem too have backfired also, infuriating Chancellor Merkel and the German political class, garnering stern words (including from perceived Kremlin-soft politicians such as Frank-Walter Steinmeier) and thus having a negative effect across the German populous.

In the United States, empirical and some technical evidence would appear to point toward the Kremlin for the hacking of the Democratic Party emails, and their subsequent dumping in the public domain (conveniently) via Wikileaks.

Undoubtedly among the continuing propaganda noise, more signals of note are going to being transmitted when opportunity arises or planned operations crescendo most effectively for audience digestion.

Questions are raised about how those on the receiving end recognize the difference between espionage (which all States engage in) and what is an attack (which perhaps not all States currently have the capability for) that will leave behind something nasty and that in the months ahead bring down critical defences and/or infrastructure, or will lead to influence operations.

Yet further, how easy would it be to misinterpret intent or miscalculate effects?  How to judge the proportionate response – at least in a timely manner?

As such, Kremlin “soft power” influence operations may manifest via recognized institutions, be they State, religious, civil society, media, in cyberspace, through organized criminality, or via far reaches of left and right political and/or ideological groups of whatever persuasion.  The more radical the group, generally the easier it is to influence using the Kremlin understanding and methods of “soft power”. The results however may lead to unpredicted and perhaps counterproductive outcomes – and perhaps seemingly disproportionate responses where once clear lines are now smudged.

How then to confront a belligerent and probing Kremlin that is leaving “soft power” traps in the peaks and valleys of the western democratic system (a system that is by definition generally tolerant, inclusive and law abiding) before tolerating the intolerable which has either done irreparable damage or requires a response far beyond that which would have been necessary if strategically planned for in advance ?

What is the current Kremlin objective both holistically and within any specific nation?  What is the likelihood of those objectives being achieved?  What are the most plausible outcomes and how great the damage done, should those objectives only be partially met?

Which actors and groups with agency are most influential in achieving those objectives?  What strategies are most likely to bring the best results for The Kremlin when attempting to influence these actors or groups in pursuit of its objectives?

How much influence do these groups have and how to mitigate that (symmetrically or asymmetrically)?

What are the information channels used and believed most credible by those the Kremlin will seek to manipulate, bribe or coerce in pursuit of its objectives?  How best to counter that messaging and undermine the legitimacy and influence of those channels?  How is the counter-messaging balance to be struck between emotional appeal, cognitive thought, and credible delivery within the target audience and have resonance?

What counter-messaging content, and what format, are the most likely to firstly be accepted and secondly bring about required perceptional change when repelling the Kremlin influence?

How equipped is the policy toolbox to mitigate the notable Kremlin influence operations (let alone the constant noise), and are there other reciprocal and/or asymmetrical actions that can be taken?

How do you monitor any countermeasures and/or reciprocal influence operations, and over what time scale to decide upon its effectiveness – or not?  Does any failure simply requiring a few tweaks or a complete overhaul to become effective?

Will there be an effective, collective, influence operation launched to meet “Western” or European objectives holistically, or will it be a matter of the Sovereigns acting individually to nation specific influence operations?  Should it be both – one dealing with commonalities and one with specifics?

Is this the most effective use of limited will and energy, even though it is clear that Kremlin influence operations are here for years to come?

For the “West”, the question is, what lessons can be learned from Ukrainian countermeasures, a nation that has thus far borne the brunt of Kremlin aggression and continued attempts at internal meddling?

By Nikolai Holmov, for Intersection