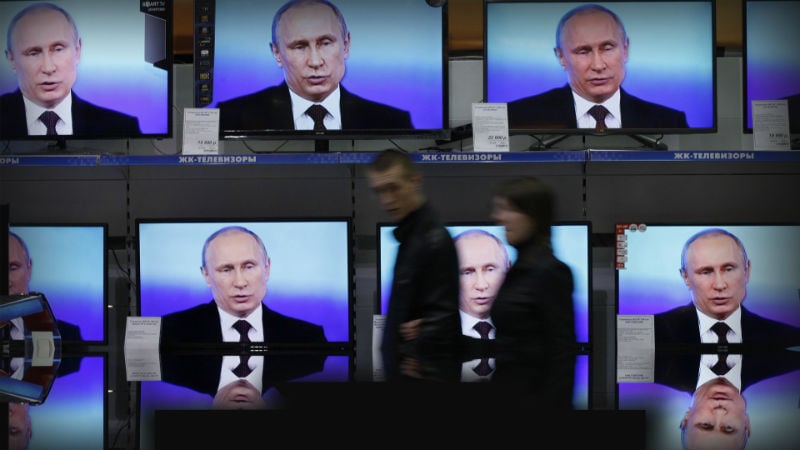 The growing power of Russian propaganda identified as a key concern for all EU member states. But in tiny Georgia, which recently survived war with Russia, government is giving the green light to Russian propaganda TV channels. In Russian state controlled TV channels occupy the main share of the package offered by major pay TV to Georgian population, Madona Gasanova wrote for The Financial.

MagtiSat, leading Satellite Television operator from MagtiCom, with a market share of over 25%, offers 43 channels in its Start package, out of which 22 are Georgian and 20 – Russian-language. Among them well known Russia’s state propaganda channels.

There is no U.S. or EU news channel included in the list of MagtiSat’s Start package.

The Start package of satellite pay TV MagtiSat costs GEL 4 per month. The package includes 43 channels. Out of them 22 are Georgian channels. As for the remaining 21 channels, all of them bar one are Russian-language. While the main share of Russian language channels are entertainment, there are some which are broadcasting news. Moreover, the Start package of MagtiSat includes Russia24, owned by VGTRK (All-Russia State Television and Radio Broadcasting Company), wholly-owned by the federal government. Another information broadcaster is RTVi, owned by Ruslan Sokolov, famous for his statement: “I am always willing to be helpful to the authorities and the state.”

Russian television broadcasts were prohibited inside Georgia in August 2008, during the brief war with Russia, when ORT, NTV and RTR TV channels launched informational campaign against Georgia, alongside the military operation. Ban on Russian TV channels were released in 2012, soon after new government came to the power.

The FINANCIAL contacted Mr. David Lee, the head of MagtiCom, in order to get his personal views about the influence of Russian TV channels on Georgian society. As of yet we have not received his response.

David Lee, who headed Magti for several years was very popular in social media for his statements about Beeline and its interests to control Georgian internet. “Today, the Internet is an integral part of national security policy as a global network is not only a tool for economic and democratic progress, but also a potential weapon. Citizens of Georgia have the right to know in whose hands the Internet is, that is the source of information”, he wrote in Feb 2016.

Later Magti took control over main share of Georgian internet. But the rules of its game now is blurred.

While the Georgian Government and businesses remain loyal towards Russian propaganda, there is a part of Georgian society which considers the situation alarming.

“The information war against the West within its propaganda machine is one of the central components of the Russian hybrid war”, Paata Gaprindashvili, Director of Georgia’s Reforms Associates (GRASS), told The FINANCIAL.

“Ukraine, Georgia and other post-Soviet states are part of this war. The West has realized and acknowledged this challenge and risk. In our case, when more than 20% of the territory is occupied; democratic institutions are still fragile; the irreversibility of democracy is a challenge; and the country is post-Soviet – Russian propaganda within Russian TV channels or other media platforms remains doubly dangerous. In addition, Georgia has a Russian-speaking population, therefore there is still some nostalgia towards the Soviet period amongst part of the population, and certain ethnic minorities do not know the Georgian language,” Paata Gaprindashvili, Director of Georgia’s Reforms Associates (GRASS), told The FINANCIAL.

As Gaprindashvili said, unfortunately, in spite of the activity of civil society and pro-Western forces, no practical or tangible steps have been made in Georgia to neutralize these threats.

“The prohibition of broadcasting TV channels of an occupant country is a principal issue,” said Tornike Sharashenidze, Head of the MA Program of International Affairs at the Georgian Institute of Public Affairs (GIPA), adding that “these TV channels are distributing disinformation and propaganda of violence.”

“More probably, Russian channels are influencing elderly people and those citizens who do not speak a language other than Russian. Those who have access to the internet are protected from Russian propaganda to a certain extent. Therefore the situation is not alarming. However, another issue is that the state TV channels of occupant Russia are freely broadcasting in our country,” Sharashenidze told The FINANCIAL.

The Georgian National Communication Commission states that there is no law regulating the number of channels being broadcast, whether of Russian or other origin. Meanwhile, Sharashenidze thinks that “if there was the political will, it would be easily regulated – a basis for cutting off the state channels of an occupant country would be easily found.”

“In addition to hard power, soft power (including state propaganda) is one of the active weapons of Russia, especially Putin’s Russia, for promoting its aggressive nationalism and anti-Western policy.  This propaganda machine is implemented by TV (state or so-called independent channels), as well as other media platforms (like international multimedia project Sputnik, which replaced Ria Novosti and Voice of Russia in 2013),” Gaprindashvili said.

In his words, Russia spends lots of money on this propaganda machine. “Russia Today, which is broadcasted in Russian, English, Arabic, Spanish and other languages, acquired an audience of 700 million worldwide as of 2015. It is available in 2.7 million hotel rooms globally, as we read in the article of the Economist, What Russia Wants. There are no free TV channels in Russia that are outwith the government’s control.”

“The main goal of the Russian propaganda machine is to brainwash, whether inside or outside the RF. They support and encourage Russian nationalism and pro-Russian forces. This spreads a nihilistic attitude towards the EU, USA and Western values by manipulating so-called Orthodox values,” said Gaprindashvili.

In June 2016, a European Commission official said that Russian propaganda was now powerful in all EU member states – but in some of them Moscow barely needed to make the effort, as local politicians were delivering its messages for it.

According to EurActiv, online media dedicated to EU policies, providing free, in-depth information to the Community of EU Actors, speaking at a Brussels public event on the so-called ‘hybrid war’ Russia is waging in Ukraine and other countries, Jakub Kalenski, a member of the European External Action Service taskforce assigned to studying Russian propaganda, said that such disinformation was active in every European country.

In the Baltic countries, Kalenski said the target was the Russian-speaking population, via Russian TV channels.

But in the Visegrad countries – Poland, the Czech Republic, Slovakia and Hungary – he said that the means of disinformation were different. There were, he said, dozens or even hundreds of disinformation websites. A Hungarian think tank counted some 100 of them, and there were some 70-80 in the Czech Republic, and a similar number in Slovakia, he added.

In Scandinavia he said “tactics were different again, and their disinformation was done mostly by trolling. Internet trolls are people who sow discord by posting inflammatory comments under articles. Russian so-called ‘web-brigades’ consist of state-sponsored anonymous political commentators.”

In May of the current year, representatives of ten NGOs and one media outlet issued a statement in which they urged the Government to ban twelve Russian TV channels in Georgia.

The activists addressed their open letter to the President, the Prime Minister, the Speaker of Parliament, and to the Chairman of the Georgian National Communications Commission, Vakhtang Abashidze.

“Broadcasting of these channels was banned by The National Council of Television and Radio Broadcasting of Ukraine, after appropriate analysis showed that these channels encouraged public unrest and confrontation through misinformation. In 2014, broadcasting of Russian channel, Russia 24, was also banned in Moldova,” state the authors of the petition.

“No concrete reaction has been made by either GNCC or officials towards our initiative. We only received general promises such as: ‘they will study and analyze the issue’,” Gaprindashvili, GRASS, told The FINANCIAL.

Information about Georgian cable TV operators returning Russian TV channels to their network repertoire began to appear from November 2012 onwards. In her interview with Iverioni, Head of the Press Service of the Georgian National Communications Commission, Khatia Kurashvili, commented that Georgia no longer had problems with Russian TV channels returning to broadcast on its territory. The Commission’s only requirement was that the TV company have a licence and an official document confirming that it is granted permission to broadcast.

By Madona Gasanova, The Financial