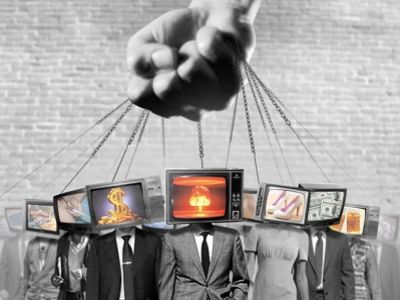 Many people assume that Vladimir Putin is simply restoring the Soviet propaganda system, but that is not the case, Yevgeny Ikhlov argues. Instead, and in contrast to the Soviets, the current Kremlin leader is not simply censoring reality but using the media to create an alternative reality, one in which appearances are more important than reality.

The imposition of the idea that Russia is engaged in “a virtual war with the West” has become possible, the Moscow commentator says, because of “the growing might of state propaganda,” on the one hand, and the attachment of Russians to television, on the other (kasparov.ru/material.php?id=55CEC2E60C9E0).

That reflected a Kremlin decision that “at the foundation of the information policy of the state must be the transmission not of events distorted by the censor (as was the case in Soviet totalitarianism) but rather the dissemination of artificial ‘events’ which the population unconsciously wants.”

In a sense, Ikhlov continues, this reflected a development of the ideas of the French sociologist Jean Baudrillard who argued that the 1991 Gulf War “did not happen” because its battles were “the first in history which did not touch the existential experiences” of people but rather were “an advertisement of the miracles of American technology.”

The Putin regime decided to turn this on its head just as Marx had done with Hegel “by transforming ‘a television war’ into the center of the existential experiences” of the Russian population. That kind of war unified the Russian people and distracted it from its “’temporary’ problems.”

Russians are being taught through television that “the Virtual World War declared by the West” has “’a Donbas front.’” And when the level of conflict ebbs for a time, the managers of Russian television provide alternative fodder about this “’war’” such as the killing of a goose or the destruction of food.

But “the main thing,” Ikhlov says, “is to periodically exacerbate the situation in the Donbas in order that [Russians can be shown] a newly destroyed house in Gorlovka to accompany each fall of the ruble” and thus both deflect public anger about that by explaining it in terms of this virtual war.

The situation in the USSR was “simpler,” he continues. “The Cold War had many real fronts, and Soviet people attentively listened to political information” disseminated by television about the movements on these fronts. But the Soviet system was finally destroyed as a result: “At its end, television showed only the overthrow of Lenin monuments in the capitals of ‘fraternal socialist countries.’”

“In Putin’s Russia on the other hand, reporting from the ruins of Donetsk can be shown forever.” But as in the past, Moscow can hide its most bestial crimes, the shooting down of the Malaysian airliner now like the killings at Katyn and say that efforts to discuss them are “hostile provocations.”

And all that has a lesson for both Russians and the West: “It is possible to understand the existing reality only by beginning” with an appreciation of the idea of “a Virtual War with the West” that Putin has succeeded in imposing on Russia.