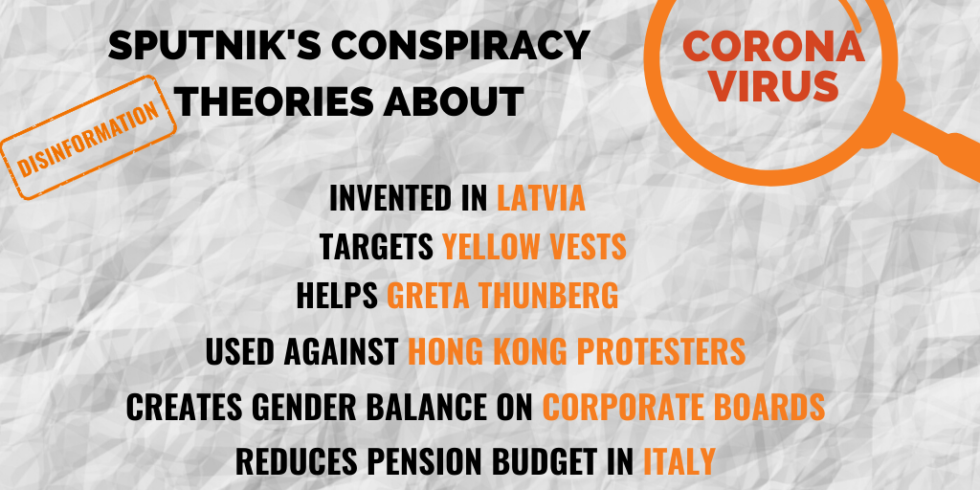 In a time that calls for international cooperation to fight a common threat, Kremlin mouthpiece Sputnik chooses to spread disinformation about COVID-19.

A Sputnik article published on 15 March promoted an entire catalogue of unfounded theories about the origin of the coronavirus: from the idea that COVID-19 could originate in Latvia to the suggestion that it could have been created as a means to reduce the number of elderly people in Italy.

What makes Sputnik want to misinform audiences about the origin of the coronavirus in this way? And how exactly is Sputnik linked to the Russian authorities?

The article in question was published in Russian by Sputnik Latvia under the headline, “Coronavirus Invented in Latvia? Why Not?” and suggested to look for who could benefit from the crisis.

According to the publication, COVID-19 could serve the interests of The Communist Party of China to stop protests in Hong Kong; governments challenged by the Yellow Vest movement; Italy to limit the economic burden of retired citizens; and Europe as a whole to not let in refugees via Turkey.

Sputnik promoted a series of conspiracy theories about coronavirus under the headline, “Coronavirus Invented in Latvia? Why Not?”. Screenshot from Sputnik.

In addition, Sputnik suggested that COVID-19 could help Greta Thunberg to promote her green agenda; European tourist magnets Prague, Barcelona and Venice to limit noise and garbage; and feminists to see more women on corporate boards, as the virus is allegedly more dangerous to men than to women.

Finally, in the spirit of the saying that “all politics is local,” Sputnik suggested that the virus could be used by Latvian authorities to postpone local elections in Riga, as well as to further a number of other potentially unpopular measures, using the virus challenge as an excuse.

Part of a tendency

Sputnik Latvia does not stand alone; also other branches of the Russian state-owned media outlet have disseminated conspiracy theories about COVID-19.

Sputnik in Arabic has speculated that coronavirus could be an American biological attack; that president Trump ordered such an attack to happen and that it has been manufactured to target Asians.

In Armenia, Sputnik has suggested that the coronavirus was created in a laboratory and labelled the virus an example of hybrid warfare. In Azerbaidjan, Sputnik has presented COVID19 as a tool to weaken Chinese economy, as has Sputnik’s branch in Belarus.

Also in Belarus, Sputnik has suggested that coronavirus could have been developed in NATO biological laboratories, while the branch in Georgia has spoken of the epidemic as not accidental and with economic goals.

Sputnik’s Spanish language branch has suggested that COVID-19 could be an American biological weapon; as a means to isolate China and to spread panic and divert attention from unpopular issues, such as Brexit.

Under the Kremlin’s direct control

With headquarters in Moscow, Sputnik operates news websites in more than 30 languages and countries worldwide.

Together with RIA Novosti and InoSMI, Sputnik comprises the state news holding Rossiya Segodnya whose CEO is the EU-sanctioned Dmitry Kiselyov. The holding shares its editor-in-chief, Margarita Simonyan, with RT (Russia Today).

Rossiya Segodnya is funded by the Russian government. According to the draft budget for 2020-2022, Rossiya Segodnya will receive on average 106 million euros per year in subsidy.

Sputnik’s editorial policy is subject to direct control from Russia’s presidential administration through a practice known as “the weekly meetings.”

The Rossiya Segodnya holding was created by a Presidential decree with the aim to “report on the state policy of Russia abroad”. That leaves no other option but to conclude that the current aim of Russia’s policy is to confuse, rather than inform about the threat from COVID-19.