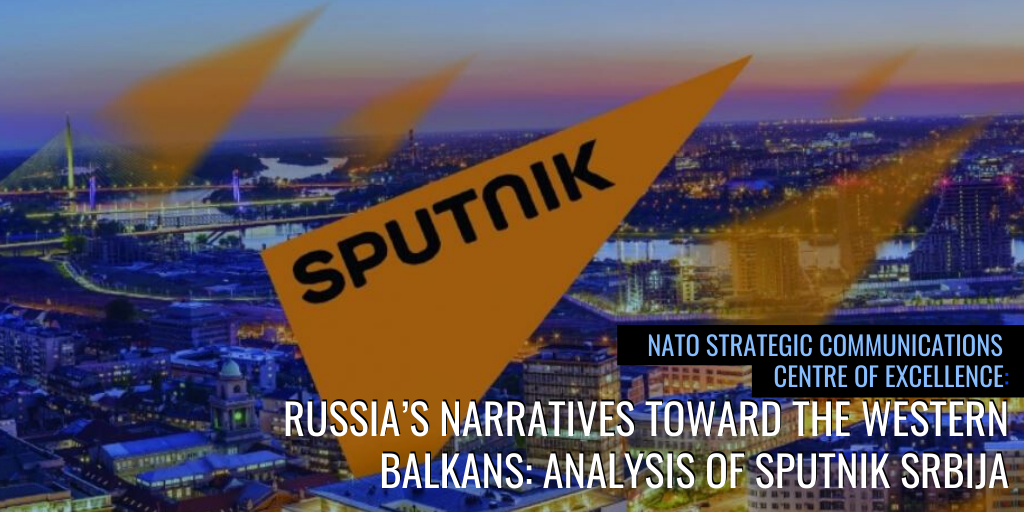 Sputnik Srbija emphasises division in the Western Balkans, presenting pro-Western forces as ‘weak’ and ‘corrupt’, aiming to subordinate their neighbours. That is one of the conclusions of a report published by the NATO Strategic Communications Centre of Excellence (NATO Stratcom CoE). It analysed the online version of the Kremlin-sponsored outlet Sputnik in the Serbian language for a period of one year (the whole year of 2018).

Sputnik Srbija has been operational since 2015. Due to language similarities between the Bosnian, Croatian, Montenegrin and Serbian languages, it reaches audiences also in the other Western Balkans countries. NATO Stratcom CoE focused on a sample of articles which relate to eight topics: the six Western Balkan countries (Albania, Bosnia and Herzegovina, Kosovo, Montenegro, North Macedonia and Serbia), the EU and NATO, with the aim to deduct the main narratives Sputnik Srbija promoted on these issues.

Sputnik Srbija’s reporting reinforces the perception of a division between ‘pro-Western’ and ‘pro-Eastern’ sides in the Western Balkans, the research says. Those close to the West (Albania, North Macedonia and Montenegro) were depicted more negatively and often associated with crime and corruption. They were presented as if they had lost “sovereignty” to the West, leaving them with “little power” and autonomy in decision-making. Serbia was presented as sympathising with Russia and therefore a “success-story in the region”.

Western Balkans as a battlefield?

NATO Stratcom CoE observed Sputnik Srbija articles which downplayed aspirations of some of the countries to join the NATO or the EU. The researchers identified 617 articles promoting the narrative that the EU is “hegemonic”. Occasionally, the reporting also focused on disagreements within the EU on the enlargement policy. 386 articles claimed that the Western Balkans were under the influence of the EU, referring as an example at the EU’s involvement in the name change referendum in North Macedonia. “The EU is not able to handle the refugee crisis”, was a narrative pushed in 75 Sputnik articles.

360 articles presented the Western Balkans as a “battle field” of the EU, with 189 articles mentioning the EU in competition with Russia. Kosovo in particular was presented as a playground for rivalry with Russia, whereas Russia is presented as supporting the Serbs in Kosovo, in opposition to the EU, which is claimed to be on the side of the Albanians in Kosovo.

Sputnik Srbija “presumably behaves like a professional media outlet”, the report finds. 88% of the articles analysed were news reports and many of them reported neutrally on the facts. These were occasionally combined with false and exaggerated elements, put out of context to shape public opinion. A neutral or opposing tone (one third of the articles) was alternated with a negative tone (65% of the articles analysed). Like other Kremlin-sponsored media, narratives promoted by Sputnik Srbija often trigger feelings of fear, unease and insecurity.