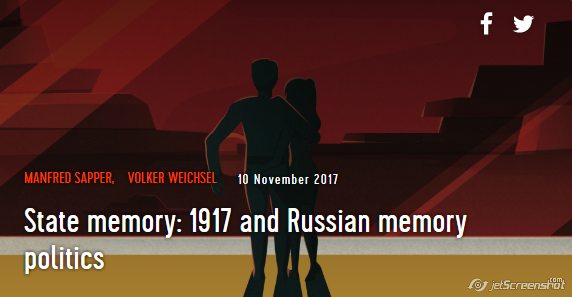 ‘Russian memory politics represses both the utopia and the violence. It wants neither to know about the perpetrators nor to commemorate the victims.’ The editors of Eurozine partner journal ‘Osteuropa’ reflect on the political meaning of Russia’s official commemoration of 1917.

Word has got out: history politics is about politics, not history. The interpretation of the past serves to define the present and to mark out the future. Russia’s commemoration of the centenary of the February and October Revolutions therefore tells us a lot about how the political leadership in the Kremlin sees itself, about the worldviews of various social groups, and about the values of Russians. The same goes for all the other states that belonged to the Soviet Union until 1991.

In the Soviet Union, the revolution in October 1917 was considered to be an event of global significance, the beginning of the liberation of human beings from material want, political coercion, violence and war. The exploitation of humans by other humans would be abolished and equality and justice restored. Empires and nation-states alike would be overcome. All nations would be united in a worldwide Union of Soviet Socialist Republics. The ideal of the revolution was nothing less than eternal peace on Earth.

However, the Bolsheviks were never able to get a social majority behind them or their utopia. At the beginning of the communist world movement was a violent power grab that, after the First World War, immediately led Russia into civil war. The spirit of utopia soon began to justify immeasurable violence: mass shootings, camps, annihilation through famine, terror.

Official Russian memory politics represses both the utopia and the violence. It wants neither to know about the perpetrators nor to commemorate the victims. It recognizes only one tragedy, which allegedly struck society like a natural disaster – and the state, which alone was able to offer salvation.

For the Russian leadership, the question of how to mark the centenary of 2017 is therefore a political-historical conundrum. How to commemorate events that symbolise the downfall and the destruction of a state, of the Russian Empire? How to remember ideals about which the ruling elite were so cynical, but which still served as the basis for the state and its apparatus? That can’t happen without memory-political inconsistencies. The patron saint of the Revolution, Vladimir I. Lenin, has fallen low. Putin has long blamed Lenin and his nationalities policy for the destruction of the Russian Empire. At the same time, Putin – whose rise is thanks to his career in the KGB and the FSB – is proud to belong in the tradition of the Cheka, the communist secret police, whose centenary is also this year, on 20 December.

The Russian regime’s fixation on the strong state and the mantra of stability, which reflects the fear of any kind of change and which allows all demands from society for reform to be denounced as calls for revolution, leads to 1917 being repressed. The Revolution is no longer to be seen as a caesura. The historical-political guidelines prescribe that the years 1914–1921 be taken as a single phase. In historiographical terms, there are reasons for widening the horizon. In terms of memory politics, however, the aim is to assert continuity between the Russian Empire and the Soviet Union. The longstanding claim of the critics of the Soviet Union – that it was an extension of the Russian Empire with a different ideology – has today been given a positive spin to become Russia’s official state ideology.

The Russian minister of culture, Vladimir Medinsky, set out the parameters of this interpretation back in 2015. Like the dynastic, social and national crisis at the beginning of the seventeenth century, the revolutionary period was a ‘Time of Troubles’ that had led to the loss of Empire. The reason for the downfall of the state was twofold: on the one hand, the defeat of Russia in the First World War; on the other, the split of the elite into ‘Reds’ and ‘Whites’. According to this view of things, the lesson of history is unconditional unity. The ‘Time of Troubles’ – a concept also used by the current regime and its supporters to refer to the 1990s – serves as a warning that justifies the repression of social plurality. When, even in the highest political circles, the Russian Revolution is said to have been a conspiracy of foreign powers against the Russian state, then associations with the campaign against supposed ‘foreign agents’ in civil society are not unintended.

This worldview perfectly matches that of the Orthodox Church. In the central thrust of memory politics and contemporary political thinking, Church and State hierarchies sing in a single, patriotic accord. Their ‘harmonious’ commemoration of the order defeated in 1917 allows it to be forgotten that priests and believers suffered particularly harshly under the Bolsheviks – and also that the Church was deeply connected to the power structures of the Soviet Union.

This kind of commemoration justifies the authoritarian political order in the same way as Russia’s renunciation of Europe and any kind of self-accountable, liberal thinking. Nothing could be more alien to Russia’s ruling elites than the idea of enlightened, mature people who aspire to be citizens, to take responsibility for the social community, to choose their representatives in free elections and to control the government through the rule of law and the separation of powers. Those were the liberal ideals of the February Revolution. After seventy years of Soviet rule, a brief interregnum, and almost two decades of Putin, they have been repressed entirely. The shock for the Kremlin was therefore great when the Maidan in Ukraine brought back memories of the revolutionary potential of a democratic upheaval.