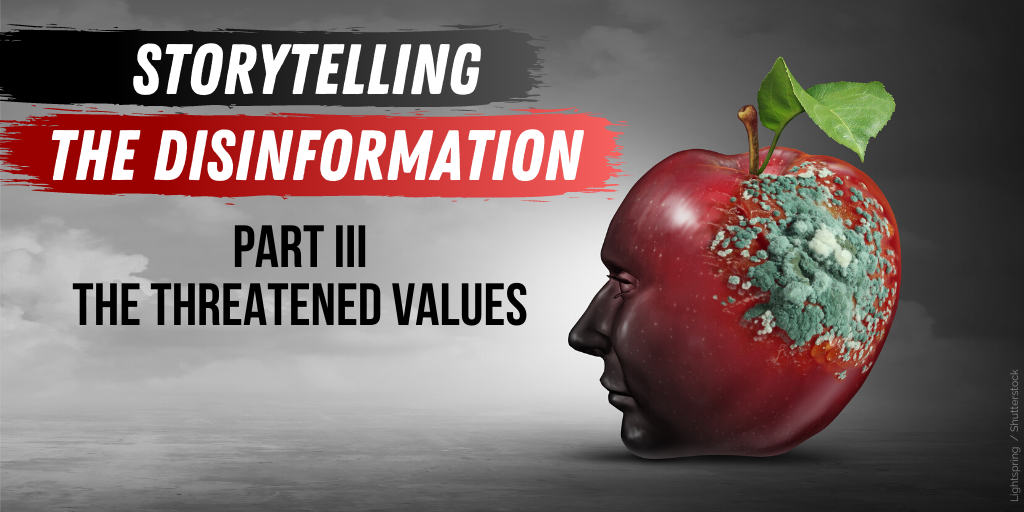 Once upon the Time, in a kingdom far, far away, a dragon was keeping the entire population hostage, poisoning it with its toxic breath. The people of the kingdom forgot everything that was important: values, decency, memories of the past. The dragon made people believe they were happy. A valiant prince did not succumb to the dragon; his people were immune against the dragon’s venomous breath. And while the dragon and its minions repeatedly attempted to defeat the prince, he managed to defend himself and lead the charge to liberate the people of the kingdom, far, far away.

Disinformation is a form of storytelling. The challenge for a liar is to make the lie attractive and plausible, to make it engaging for the intended audience. We have observed how most of the pro-Kremlin disinformation boils down to a small number of narratives, many of which have a strong similarity to the fairy tale above.

Last week, we observed the scene of the battle between the protagonists; this week, we learn what is at stake as the battle begins.

Moscow as a modern Sparta

The pro-Kremlin media often refer to the concept of “spirituality”. Western society has lost its connection with the real values and deferred entirely into decadence and consumerism. The West has abandoned the ideals of Christianity, Family, and Patriotism – the true European values. One Russian nationalist philosopher, Aleksandr Dugin, suggests we are in the middle of a cosmic battle between two civilizations. Russia, Sparta, and Rome represent mankind’s heroic nature, while the United States, Carthagene, and Athens are examples of a civilization, based on Liberalism, perversion, and infanticide.

The Civilisation of the Seas, Carthagena, prayed to Baal and Moloch and was a cult based on money and sacrificing infants. It was the religion of the free markets and the financial oligarchs, of perversion, and corruption. It was a role model of the modern West; and one of the earliest versions of liberalism and globalism within the framework of the Mediterranean Sea. The civilisation of the Land, Rome, worshipped manly gods, glory and loyalty, respected the traditions and maintained a strictly conservative order.

The feminists have prevailed completely and irreversibly. The feminists are able to destroy any man who has the guts to take pride in his manhood– currently a questionable achievement. The logics of the evolution is out of order, the role of the man for humankind is reduced to a symbolic function. He has lost his privilege to prey; and has  the same level of knowledge as everybody else. Only a person with mental issues go to war nowadays, and valiant duels are just silly and an option only among even-toed ungulates.

Genetics will remove man’s last remaining gift of nature: the right to spread his semen. For a while, men will imitate significance, but in reality, he has become a burden to society. One might, from a humane perspective, protect a few men. Let them live in designated areas, like Marco Polo sheep. In a few hundred years, amazons will fly in with helicopters for poaching.

On the other hand, Russia is a haven of order and decency – of true, European values:

The European Union has replaced the ancient, thousands of years old fundaments of Europe with a cocktail of liberalism, feminism, LGTB-activism – and an anti-European “anti-colonial” leftist rhetoric

Traditionalists, identitarians and eurosceptics look at Russia with hope, and at Putin as almost a Messiah. It is Moscow, rather than Paris, who is defending the values of European traditions and the high level of European culture. It is Russia that is the champion of the geopolitical pluralism that makes Europe the real Europe.

A concept used in Russian nationalist circles is that Russia is “The Katehon” – “The One Who Withholds”. This refers to a word from St. Paul’s epistles about a force that withholds the Antichrist. In the Kremlin’s story, this is the role of Russia; it’s civilizational duty.