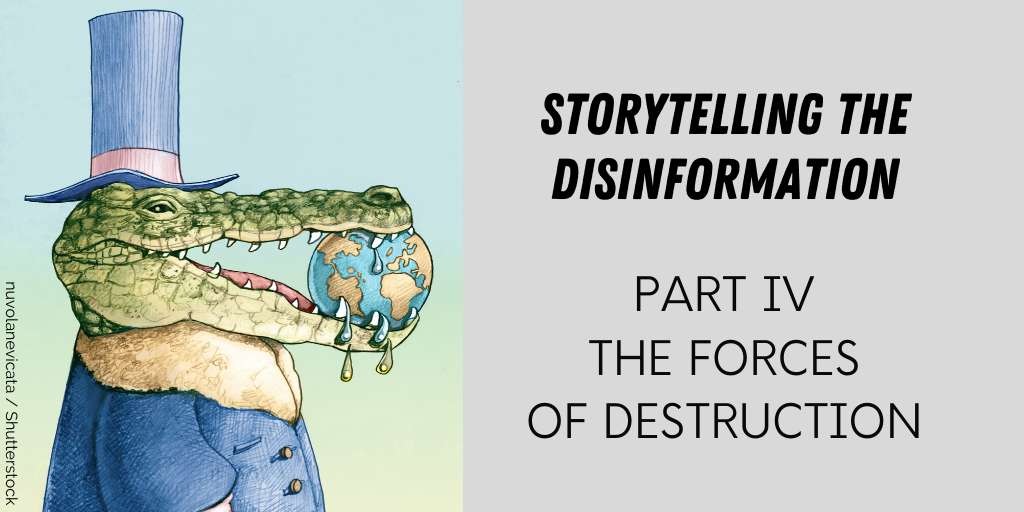 The Forces of Destruction

Once upon a Time, in a kingdom far, far away, a dragon was keeping the entire population hostage, poisoning it with its toxic breath. The people of the kingdom forgot everything that was important: values, decency, memories of the past. The dragon made people believe they were happy. A valiant prince did not succumb to the dragon; his people was immune against the dragon’s venomous exhalations. And while the dragon and his minions repeatedly attempted to defeat the prince, he managed to defend himself and lead the charge to liberate the people of the kingdom, far, far away.

Disinformation is a form of storytelling. The challenge for a liar is to make the lie attractive and plausible, to make it engage the intended audience. One could note how most of the pro-Kremlin disinformation boils down to a small number of narratives, plots with a strong similarity to the fairy tale above.

Last week, we saw what is at stake as the plot unfolds. This week we meet the villains, the forces of destruction: the Dragon of the fairy tale.

The first case in the EUvsDisinfo Disinformation Database on the coronavirus, 22 January 2020, already painted a clear picture: the virus was manufactured in NATO laboratories. NATO is the villain in more than 10 percent of all cases in the database, paying Belarusian opposition to spread the virus, massing up military on Russia’s borders, preparing for an invasion, performing tests on humans… NATO is a threat to the countries’ sovereignty, it transforms member states into vassals of the United States.

NATO is a well-known bogeyman, a comfortable “dragon” for the Kremlin story. Generations of former Soviet citizens grew up during the Cold War and are familiar with this story.

Pro-Kremlin disinformation outlets eagerly employ conspiracy theories to back their narratives. When you can’t use existing parties as villains in a conspiracy, fantasy villains work just as well. One very popular villain is The Deep State.

The concept of The Deep State implies an existence of rulers behind the scenes. We might elect presidents and parliamentarians, but the real power lies somewhere else; in the bureaucracy, in the military, with the bankers and industrialists. There are, according to the pro-Kremlin media, secret, global elites that rule in the shadows. The EUvsDisinfo has written about the conspiracy theory as a comfortable instrument for disinformation.

The great thing with a conspiracy theory is that it can be reused with suitable villains to reach various audiences. The Vatican, The Liberals, The Rothschilds, George Soros, The British Empire, The Zionists… these are a few of the Dragons in the Kremlin fairy tale. Any kind of dissent in Russia is described as tools of malign forces abroad.

Occasionally, pro-Kremlin outlets descends into anti-Semitism. One notable offender is the US-based Russia Insider website. The site launched a full-fledged anti-Semitic campaign in January 2018 and has since become a vocal voice for white supremacy in the United States, praising Hitler and Putin with similar passion. Anti-Semitic content can also be found in Russian state-owned and/or oligarch controlled media. Russia’s largest daily, the Komsomolskaya Pravda, refers to the “Protocols of the Elders of Zion” in a comment to Donald Trump’s victory in the election 2016:

The shadow rulers of the world, the Elders of Zion or what we should call them, do not have any fail-safe method to win the power. They might write whatever they want in their papers, but who believes these papers anymore? The election of Trump proves that the people has lost its belief in the lying papers. The people decided by themselves. And the shadow rulers were left high and dry.

The Kremlin has an entire menagerie of dragons at its disposal. Fire-breathing, ominous and enigmatic, and always ready to look scary whenever a villain is needed.