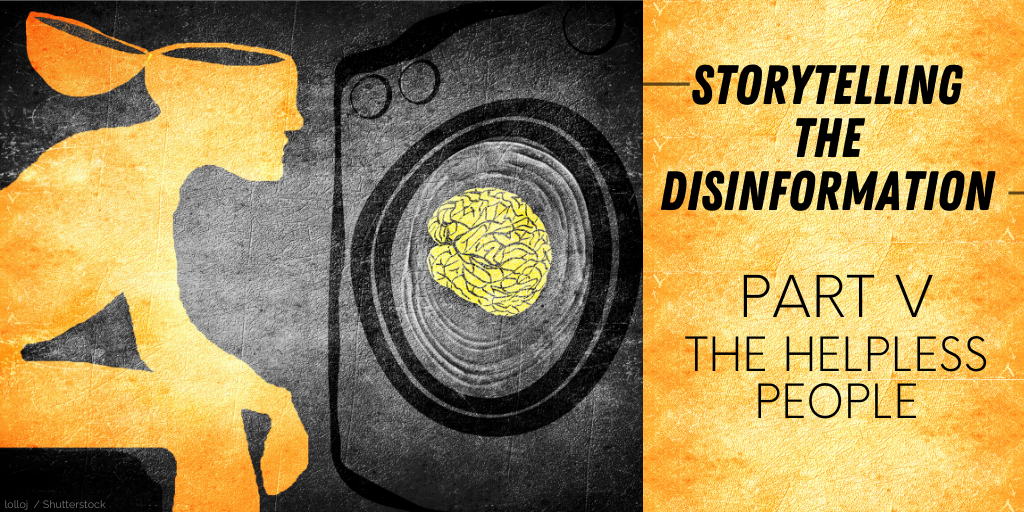 Once upon a Time, in a kingdom far, far away, a dragon was keeping the entire population hostage, poisoning it with its toxic breath. The people of the kingdom forgot everything that was important: values, decency, memories of the past. The dragon made people believe they were happy. A valiant prince did not succumb to the dragon; his people was immune against the dragon’s venomous exhalations. And while the dragon and his minions repeatedly attempted to defeat the prince, he managed to defend himself and lead the charge to liberate the people of the kingdom, far, far away.

Disinformation is a form of storytelling. The challenge for a liar is to make the lie attractive and plausible, to make it engage the intended audience. We can note how most of the pro-Kremlin disinformation boils down to a small number of narratives, plots with a strong similarity to the fairy tale above.

Last week, we met the villain of the story; this week, we meet the helpless victim, the damsel in distress in the pro-Kremlin fairy tale. The people.

In the Kremlin’s worldview, the people are a passive mass in need of guidance. Expressions of popular discontent are never genuine; they are always provoked, staged and managed by outside forces bent on destruction. Euromaidan in Ukraine, the protests in Venezuela and in Hong Kong or even the Black Lives Matter protests in the United States – all are nothing but manifestations of destructive technologies:

It is not surprising that Trump is blamed for the death of Floyd, despite the fact that Minneapolis and Minnesota are run by Democrats. He was also blamed for the coronavirus by the Democrats, the same people who insisted for years that Russiagate was real. Now they blame Trump for responding to the riots (what they call “peaceful protests”) by sending the army. Colour revolutions follow a script: find a legitimate cause, ask the police and the army to join the protests, and if they don’t, intensify the riots to provoke a forceful response that creates martyrs. Everything useful must be captured by cameras, and any inconvenience removed from memory. The goal is not reform, equity or justice, but regime change.

Individual rights are a cornerstone of democracy. We make our own choices based on our personal convictions. The Kremlin’s view on democracy is fundamentally different. Russia’s president, Vladimir Putin, expressed in an article his conception of democracy:

We need to build a mechanism for a political system in a way that allows it to adopt and mirror the interests of the big social groups and secure a public concord on those interests.

According to this view, the party system should reflect the interests of social groups, not individuals. There should be, following the Kremlin’s logic, a Rich People’s Party and a Poor People’s Party. Maybe a Farmers’ Party and a University Professors’ Party. Political views are allegedly connected to our social categories, not to individual convictions.

One of the architects of the current Russian political system, Vladislav Surkov, a former close aide to the president, defined further the passive role and the submissive mindset of the Russian people. Russia does not have a Deep State, according to Surkov, but it has a Deep People, a mysterious sentient mass, usually incomprehensible to the people, with one important exception:

The ability to hear and understand the people, to see it right through to its very bottom and act accordingly – this is the unique and dominant feature of Putin’s State. His power is acceptable and understandable for the people and therefore is not subject to the destructive stress of the conflicting tendencies of history. Hence, it is efficient and long-lasting.

Translation into fairy-tale language: “And so they lived happily ever after”.