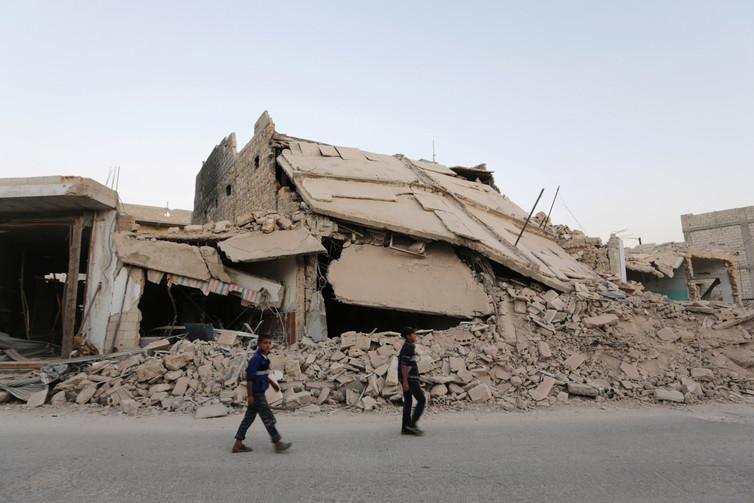 By Nicolas Tenzer, for The Conversation

As the aerial bombardment of Aleppo resumes, one thing is clear. Syrian President Bashar al-Assad’s military campaign in Syria, waged with the support of Russia, can only be described as a war of extermination.

The deliberate bombing of civilians – including women and children, aid workers, Syria Civil Defense personnel and people in hospitals – while not entirely new to warfare, is nonetheless part of a systematic approach: kill everything in sight.

This is an all-out war, which Vladimir Putin’s Russia is using as a testing ground for new weapons, including bunker busters.

Many have justifiably drawn parallels with Guernica, including the French ambassador to the United Nations in a poignant speech. Nazi Germany and Fascist Italy’s air forces blasted the Spanish city in 1937, while Franco’s troops attacked on the ground.

In Syria, Russian planes have taken over the sky, while Assad’s troops and Iran-backed Hezbollah wage the ground war. And their war of extermination will likely intensify in the coming weeks.

Russia isn’t even trying to hide its increasingly flagrant war crimes any more, and the Syrian regime continues to commit crimes against humanity, especially in its prisons, where the most sadistic torture is commonplace.

All is now useless

Many people (myself included) have said, time and time again, that Aleppo and Syria have to be saved, that we have a responsibility to protect, that our militaries need to enforce a no-fly zone (which is still a viable possibility). In short, that intervention is a necessity.

The usual response is that it’s primarily the responsibility of the United States and its allies to act, and that they alone are in the position to do so. The most faithful supporters of Barack Obama have called out his irresponsibility and indecision over Syria, and pointed out his duty to history.

Many (myself included) have said that negotiating with Russia – a main aggressor in the war rather than part of the solution – is foolish.

We said, time and time again, that all ceasefires were doomed to be broken, and they have been. Often earlier than the most pessimistic among us predicted.

Finally, looking at things candidly, we realised that the UN is incapable of acting. Its hands are tied by Russia and China’s power of veto at the Security Council.

A friend carrying out humanitarian work in Syria wrote to me recently to say all was now useless. He said he was sick of the indignation, anguish and emotion coming from the mouths of politicians and commentators, from his own and from mine.

He’d had enough of people who insist they’re “deeply moved”. If I understood him correctly, he meant that even tears and indignation have become indecent. That the shame of the atrocities perpetrated by Assad’s regime, and by Russia and Iran, is now ours.

What could I say? Is it still morally possible for me, for any of us, to say something? And, if so, must it be said with the terrible fear that our indignation is just a pathetic way of allaying our conscience?

As for the media (a topic of the utmost importance, given the heavy barrage of lies and disinformation that are being used as a veritable weapon of war), might we not simply be adding excess emotion with an ineffective stream of images of the overabundance of crimes and rising body count – and risk compassion fatigue in the process?

I recently came across the image of the Syrian salesman, a peddler of inexpensive toys, going from town to town. He was evading the bombings like the others, for however long he could. His only payment the fleeting smile of a child who might be shot or crushed the next day.

This man was like the Righteous Gentiles, who saved Jews because they had to, because it was self-evident and crucial. And because not doing so was inconceivable. These people, as Hannah Arendt wrote, really gave the situation thought, more so than the intellectuals who weighed up the dangers, quibbled over the pros and cons, and bought themselves time.

So all is not useless. We must also fight – and that means speaking out.

First, the revisionists will talk about the so-called Islamic State, and how the US is partly to blame for its ascent (which neither Assad, nor Putin, had any interest in preventing).

Then, they will say that we must first talk about the very real horrors perpetrated by Saudi Arabia in Yemen, the bombings in Gaza or the chaos in Libya. This latter is usually used as a prime example that chaos must be avoided at all costs, reducing the situation in Syria to an option between Assad or chaos.

Finally, the generalists, as the French political scientist Bruno Tertrais recently demonstrated, will philosophise on the fundamental role of Russia; how rivalries between major powers in the Middle East have turned it into a time bomb; how complicated the Eastern world is; and on Islamism in general and the schism between Sunni and Shia in particular.

They will lecture you on the importance of respecting democracy (pointing out Assad was elected with more than 88% of the vote in 2014); on the complete failure of the Arab Spring; on the part played by the Sykes-Picot agreement, and so on.

Of course, these arguments have been refuted a thousand times, by informed, fact-driven explanations, and by first-hand accounts – in short, by the truth. But what does it matter? If you want to justify a massacre that has claimed 500,000 deaths in a little over five years, or bolster the leader of a country whose use of brute force knows no bounds, and present his crimes as a necessary fight to defend the West, then the truth becomes nothing more than an enemy ploy.

The end of the league of democracies

It has been said, rightly, that what we call the “international community” doesn’t exist.

This is illustrated in the renationalising of international political strategy, the weakening of shared values within international institutions, and the emergence of what has been called the G-Zero: the absence of a worldwide governing body and the inability of the only global power to fulfil its role. Washington’s cowardice in Syria is almost a self-fulfiling prophecy – American foreign policy ends with Aleppo.

Yet, what is missing from the international community is nothing more than the actual building blocks of a community – common values. Let’s get right to the heart of the problem. We cannot have a community unless we respect the truth and seek it out; unless we share a broadly similar definition of good and evil; unless we can discriminate between what is important and what is not; unless we are united by shared emotion; or unless we distinguish between values and interests.

In other words, we cannot have an international community unless we hold these values to be universal.

The main problem is uniting these propositions. Together, they make up the basis for what I would call a democratic community. The reaction to the crimes in Syria seems to demonstrate the fragility of such a community.

Without a common experience of suffering, unless we are personally affected by these Syrian victims, a political community is unimaginable.

Without this community, relativism creeps into the heart of the rule of law, making crimes against humanity a secondary consideration, and normalising extreme violence. This is the future we are building.

It may seem useless, but we must never stop speaking out against this. Because it is political. And because it is crucial.

Translated from the French by Alice Heathwood for Fast for Word.

This article was originally published in French