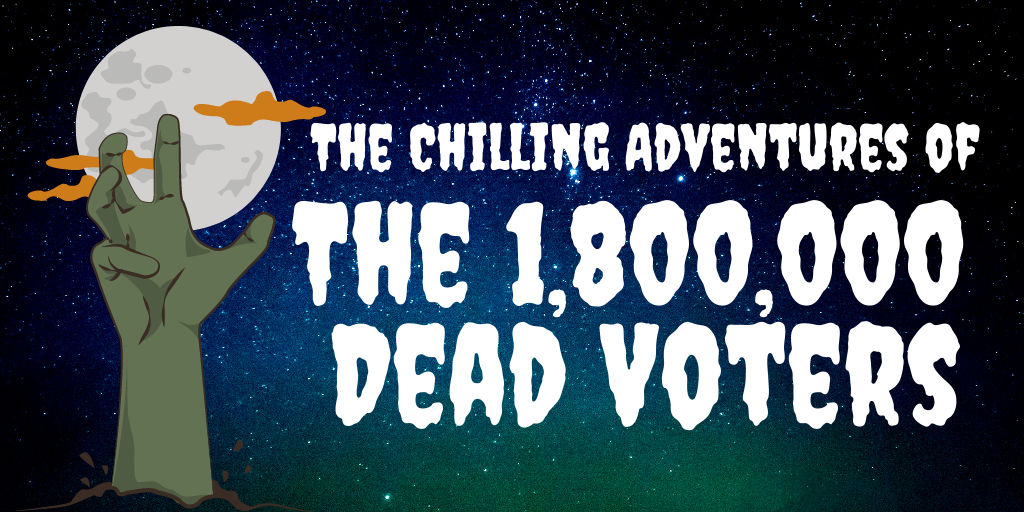 Never Check a Good Story if it Fits the Kremlin

Russian state TV did go large, broadcasting the allegations on US voting fraud. The numbers were impressive: 1.8 million ”dead souls” took part in the US presidential election! This represents a population larger than four EU member states. It amounts to the population of the third largest city in Russia. A zombie city the size of Hamburg or Warsaw. The claim was published in all the largest Russian Kremlin-controlled media outlets: the daily Izvestia, Russia’s largest web news service Lenta.ru and Nationalist Rossaprimavera.ru, to mention just a few.

And honestly, no newsroom in the world can ignore a report that claims to have data on such massive voter fraud. All the above-mentioned sites refer to the same source: US think-tank Judicial Watch. This is where claim first appeared:

Unlike the Kremlin channels, Judicial Watch does not claim that 1.8 million dead people voted in the election. The study identified a discrepancy due to the failure of States to clean up ineligible voters from their rolls before the election; in September 2020, before registration for this year’s election was closed.

And the figure – 1.8 million – seems to have a certain magic function in the election context. British newspaper The Independent has done what professional journalists do: they checked the sources, and found a certain recurrence in the numbers. The exact same number appeared in 2012 and 2016 – and now. Roughly 8,000 US residents die every day. Eight years is around 3 000 days. Thus, since 2012, give or take 2.4 million US residents have died, in addition to the 1.8 million deceased voters from 2012. Still, the number of 1.8 millions dead voters has remaind unchanged. One gets the impression that the US electoral system does not treat all dead voters equally…

The Kremlin outlets never attempted to go through the numbers or details of the US think-tank report and decided not to spoil a good story by checking sources, comparing figures, studying data. Unlike in professional journalism where these kinds of statements are challenged, scrutinised and questioned, Russian state TV simply broadcast uncritically any statement that fits the Kremlin media dramaturgy according to which “democracy is merely a battle of bastards”.

In this battle of bastards, it is important to have powerful allies. Aleksandr Ageev, the General Director of Russia’s Institute for Economic Strategies and a member of the Russian Academy of Sciences (yes, sciences!), suggested in 2016 granting voting rights to the 27 million dead Soviet citizens

Reasoning about the role of the Great Patriotic War as a foundation for consolidating society, he suggested considering the possibility of giving voting rights to the 27 million soviet citizens who were killed in the war.

27 millions dead heroes, joining the battle against the evil; weighing in with their wisdom from the afterlife on the decision-making, with their vote exercised by their families. Why complicate things with the fact that roughly half of those 27 million were citizens of the non-Russian Soviet republics?

Ageev’s proposal never really gained traction, and Russia decided for the time being to stick to the principle of granting voting rights only to the living.

EUvsDisinfo has detected a large number of cases of disinformation around the US elections, with the general narrative in pro-Kremlin media questioning the integrity of the elections and the actual legitimacy of the US presidency as an institution. The people does not elect the President of the United States: Soros does, the Deep State and now also a careful selection of deceased voters.